In a bid to stand out from the crowd and potentially lure the market away from the omni-present SUV, peugeot released an entirely updated 508 this year. They’re not entirely flouting the SUV craze though as they have a couple of pretty good new offerings on that front as well, the new 3008 and 5008 as well as the returning 2008 SUV. But it seems that Peugeot remember the halcyon days when the low slung saloon was the car of choice for the executive and family driver alike. Are they being nostalgic for a long lost time, or could this be the car to, at least somewhat, stem the tide of the SUV?
Pros
Cons

Peugeot have a habit of designing interesting cars. Like the 3008 and 5008, this new 508 grabs your attention, especially when compared to competitors in a similar size and price bracket. The GT and GT Line models have a distinctive checquerboard chrome design for the front grille. That’s framed by full LED headlights with LED indicators extending like fangs down either side. And, in a nod to the 1970s former icon the 504, the identifying 508 badge is placed centrally on the nose.

From the rear, the new 508 may be slightly less striking, but the LED tail-lights are pretty cool. Especially if memories of Knight Rider warm your nostalgic heart. 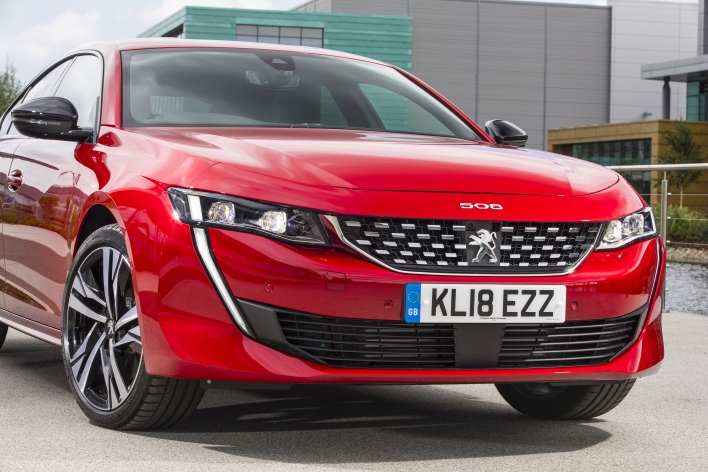 If you’ve ever sat inside a Peugeot saloon from the 90s you’d be forgiven for being a bit sceptical of the interior build quality of this new 508. They were a bit flimsy weren’t they? No need to worry though. Everything within reach is either leather, soft-touch plastic or a tactile veneer. It feels good to the touch and everything is solid and well made.

A compact steering wheel, an 8 inch touch screen (upgradable to 10 inch) and a 12.3 inch head-up display come together to form what Peugeot call the i-Cockpit. They’ve rolled this out in the 3008 and the new 5008 SUVs as well. The infotainment system is good, fairly responsive, though not the absolute best one out there. All trim levels come with Apple CarPlay and Android Auto. As well as the standard touchscreen some of its core features can be operated with physical keys, almost piano like. This screen is angled towards the driver and at a good height for viewing. The compact size of the steering wheel and its slightly lowered position means that the 12 inch instrument display is un-obscured.

The cabin has pretty decent storage options with a large bin in the centre, a good sized glove box, and twin cup holders.

In the rear you don’t get an awful lot of headroom unfortunately. The sloping roof looks great from the outside, but cuts a fair bit off the internal height. Younger passengers will be fine, but if you’ve landed the adult carpool gig the rear passengers won’t be best pleased.

With the rear seats in their normal position you get a pretty healthy 487 litres of boot space. If you fold them down you’ll find over 1000 extra litres. 1,537 in total. The hatchback boot opening is a good square shape but there is a bit of a lip and you’ll have to reach over the bumper to transfer luggage in and out. 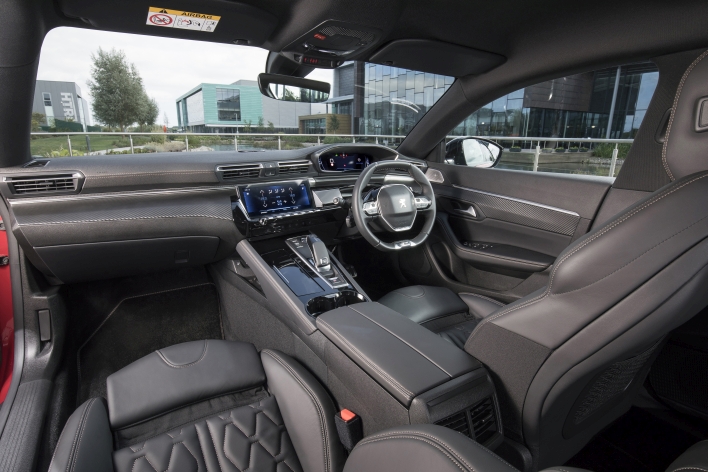 The new 508 comes with a choice of petrol and diesel engines. Depending on the trim you opt for, you can take your pick of:

All of the above options are twinned with an automatic, 8-speed gearbox which makes driving the new 508 quite pleasant. If you choose the smallest, 1.5 litre diesel you can opt for a six-speed manual transmission, but honestly, the automatic is better. 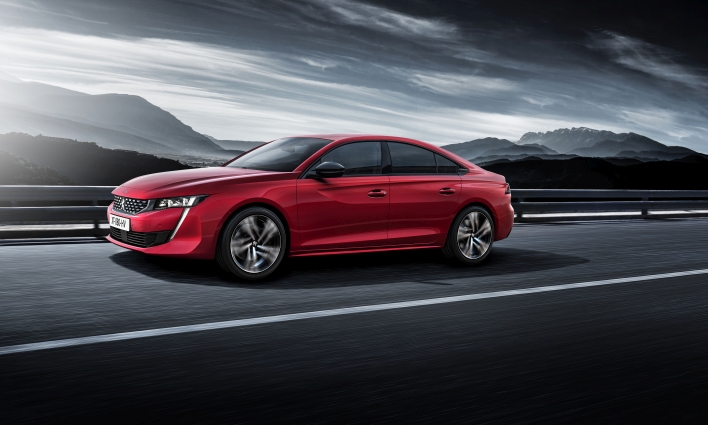 Your choice of engine will of course affect the running costs of the new 508. Annual road tax ranges from €180 with the 1.5 litre diesel to €280 for the 1.6 litre petrol.

When it comes to fuel consumption, the automatic petrol will be the greediest, but can still get a fairly respectable 40 miles to the gallon. The smallest diesel is the most frugal. Automatic versus manual has a small effect, with the manual being slightly less thirsty, but you should be expecting between 56 to 60 miles to the gallon. 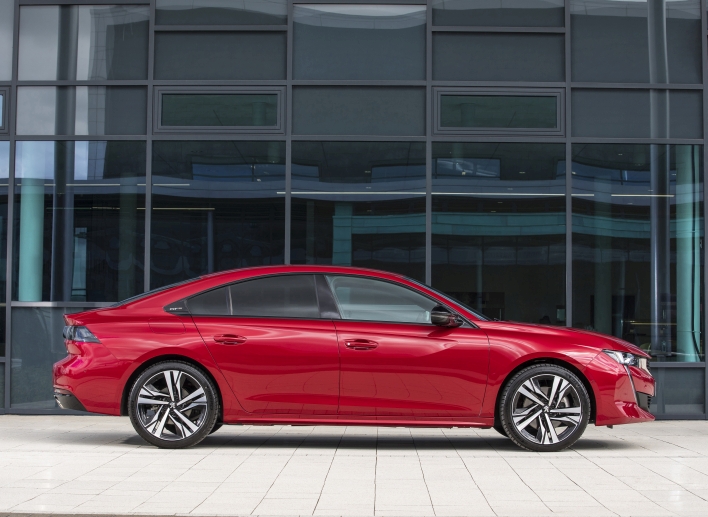 The new 508’s suspension is firmer than you might usually expect of an executive saloon. Steering is quicker to respond than you may be used to. These facts coupled with the smaller than normal steering wheel give you a feeling of sportiness that you probably wouldn’t expect from a car in this class.  Cornering can take a bit of getting used to, but once you’ve driven it for a while you should find it quite a bit of fun. 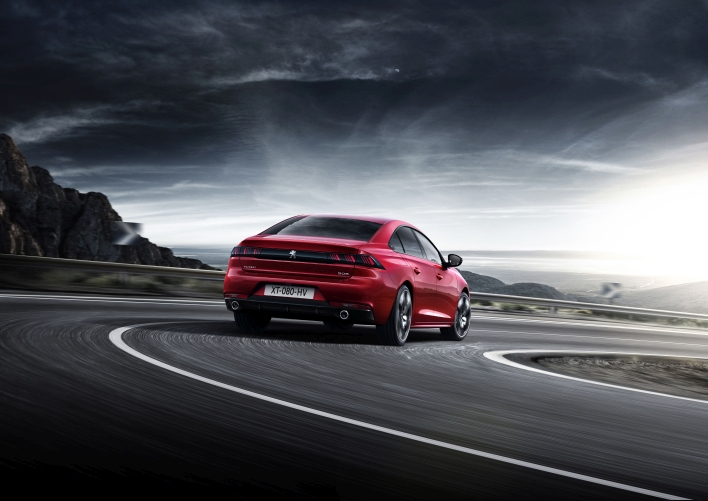 Euro NCAP awarded the new 508 the full 5 stars in their crash safety tests. The standard safety features are good. In fact, all models have features such as distance alert, lane keeping assistance and an automatic emergency braking system. If you opt for a higher trim level you’ll get more. The GT Line trim comes with lane positioning assistance and adaptive cruise control. One of the most impressive safety features is an optional extra, but on Irish roads I’d say it’s almost a necessity. You can choose to fit the new 508 with a night vision camera which detects pedestrians or animals in front of the car. The heads-up display shows them lt up and outlined in red. 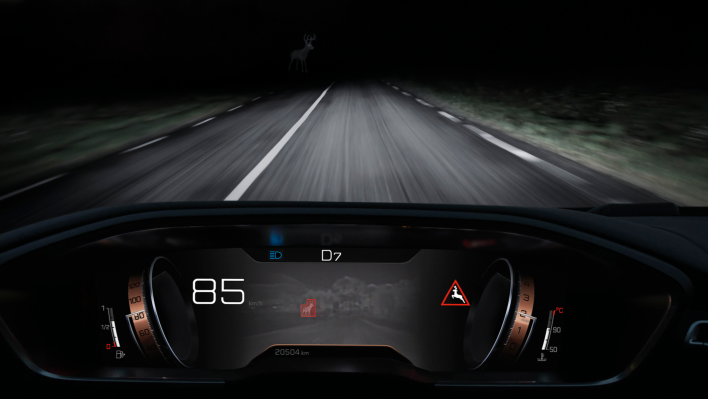 Peugeot are challenging the trend of car manufacturers who are placing all their faith in SUVs. They're not throwing all their eggs in one basket of course, they have just released the new 3008 and 5008 SUV after all. But with the release of the new 508 they are offering something slightly different. They are offering something welcome. This car looks good. It drives well. It has a good range of safety and comfort features.