January 2018 saw the first Hyundai Kona registrations in Ireland, and across that year we saw pretty healthy sales. So far this year the Kona has risen to become one of the ten best selling cars in the country. With the increasing popularity of hybrid and purely electric vehicles, the launch of the all-new Kona Electric is set to add to Hyundai’s success in the Irish marketplace. Apart from fitting into the current compact SUV zeitgeist and actually being quite a good looking, well performing car, the main headline for the Kona EV is its impressive range. Published figures and real-world tests all seem to be in agreement, that for pure distance travelled between charges the new Kona Electric is the best EV out there at the minute.
Pros
Cons

Anyone familiar with the carbon-fuelled Kona will see resemblances with it’s new eco-friendly sibling, but there are some definite, if subtle differences with the exterior styling.

Hyundai have tweaked the rear bumper and spoiler for a bit of extra aerodynamic swooshiness. Gone is the contrasting front grille. The battery pack doesn’t need the same sort of air intake as a combustion engine so the gaps in the front have been closed up. To the right of the Hyundai badge is a neat pop out panel that hides the charge point.

The fuel tank is also gone of course, so too is the exhaust. The 17 inch alloy wheels that come as standard are exclusive to the EV Kona. But, other than these stylistic and practical changes, the overall look and feel of the Kona EV is relatively unchanged. After all, the combustion engined Kona is only really a year old, and is one of our most popular cars, so why fix what isn’t broken? 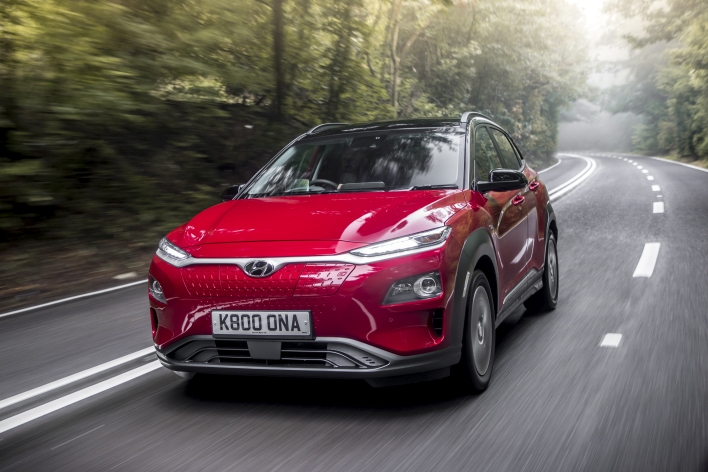 Inside we’ll notice a few changes from the standard Kona as well. The centre console is higher,  and has a nice storage space where usually you’d have a gearbox and transmission. Rather than the conventional gear stick, there are four buttons. The electric handbrake also saves a bit of room. Leaving more space for designers to fit cubby holes into. All-in-all you won’t be lacking storage choices in the cockpit of this new Kona. Dotted about the interior are Cup-holders, wireless phone charging points, extra bins with 12v sockets and USBs galore.

The 7inch touch-screen infotainment system is pretty good. You’ll recognise it if you’ve sat into a Kia or another Hyundai. It performs pretty well without being anything exceptionally mind-blowing. This infotainment system is designed for phone connectivity, sat-nav and displaying info about your car. It does these things well, in a clean, uncomplicated way. Android Auto and Apple CarPlay are also standard features.

In an effort to increase the efficiency of this electric work-horse, Hyundai chose a lot of plastics for the interior build. Nothing feels cheap exactly, but it doesn’t feel luxurious either. But then, this isn’t really competing with a top-of-the-line Audi or BMW. Driver and front passenger seats are both leather and heated as standard though, and the driver’s seat comes fitted with electric lumbar support, meaning that driving this car is actually very comfortable.

The rear is as spacious as any other compact SUV. That is, not as spacious as a full SUV but fine for a young family or occasional ferrying of other adults around. A 6? + adult can easily sit in the rear, but you may not want to squeeze three of them in.

The rear seats have a 60-40 split and when they’re folded down the boot is relatively flat so packing up the weekly shop is no problem. With no lip to speak of sliding longer, bulkier objects in is pretty straightforward too. When the seats are up you’ll have an average-ish amount of luggage capacity, 332 Litres. With the seats down that increases to 1114 litres. 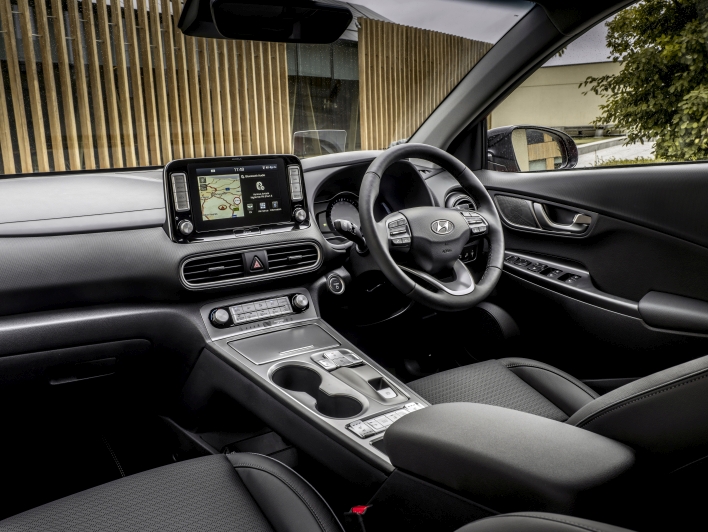 The Kona Electric may rival the I-Pace or a Tesla on range, but sadly it won’t be troubling them too much on performance. I have to say though, it does feel quite sprightly to drive. Due to its electric drivetrain there’s never any lag between you putting your foot down and feeling the effect. You’ll arrive at 100 km/h in 7.6 seconds and can get up to a top speed of 167 km/h. 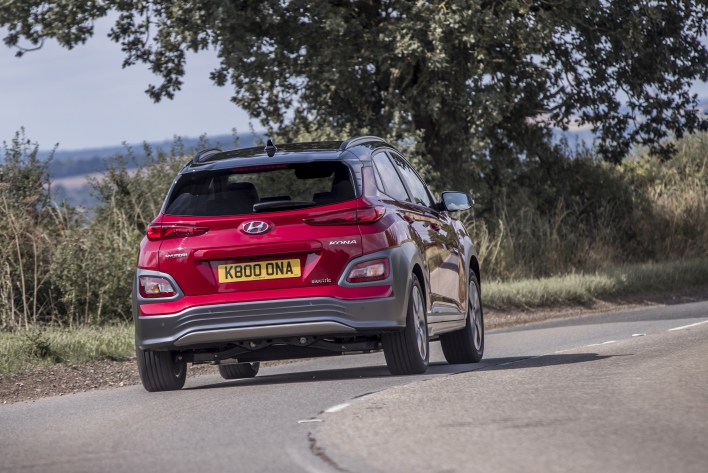 More and more manufacturers are bringing out fully electric or hybrid cars with every new report. And in Ireland, more and more drivers are making the switch from carbon to greener options. But, until the electric revolution fully takes over, a car’s range will be most potential switchers’ biggest concern. The lower road tax and cheaper overall cost to run an electric vehicle mean little if you’re stuck at the side of the road in the Burren waiting for a tow truck when the battery goes flat.

This is probably one of the main selling points of the new Kona electric.  The published figures from the Worldwide Harmonised Light Vehicle Test Procedure put the range of the Kona Electric’s 64kWh battery at 449 kilometers or 279 miles. Now this is, in itself quite impressive. The real headline though, is that in real world testing the Kona Electric appears to actually get close to the published figures.

We’ve always taken published fuel consumption and emissions with more than one grain of salt. Everyone knows that real-world driving conditions and style will never replicate what scientists and engineers achieve in the car laboratory. But it seems as if Hyundai’s claims of efficiency are actually bearing some fruit. Real world tests of the Kona electric have shown it can achieve almost 260 miles between charges. This means its closest rivals in terms of pure range aren’t the other affordable electric vehicles out there, but the much larger, more powerful Jaguar I-Pace or a Tesla. And, at a fraction of the price. 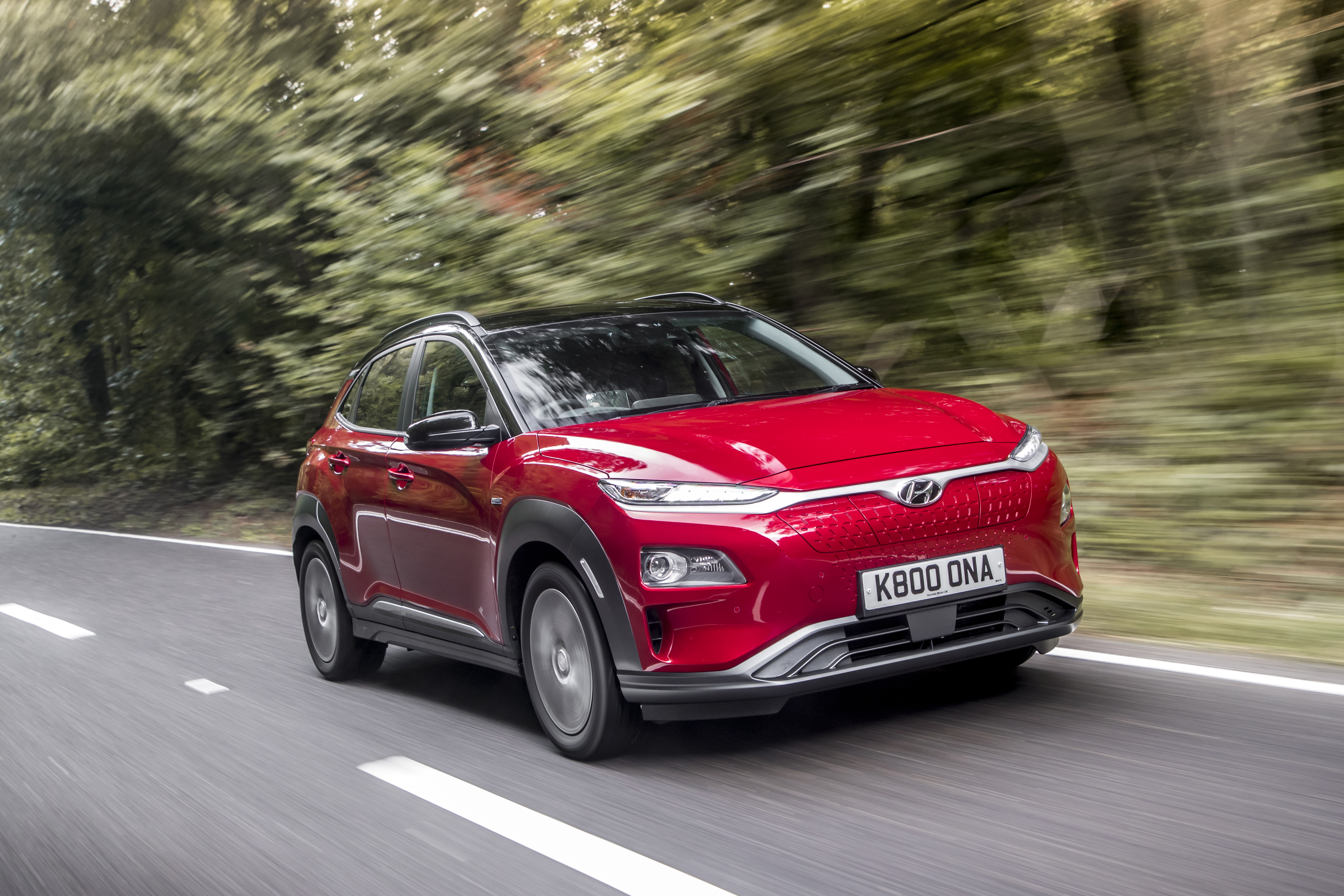 EuroNCAP haven’t specifically tested the Kona Electric. But their tests of the standard version of the Kona came back with the full 5 star rating for safety. The Kona Electric comes with a good list of safety features and driver assistance as standard. It has a reversing camera and rear parking sensors, anti lock braking and electronic stability control, lane keep assist system and a driver fatigue warning system as well. 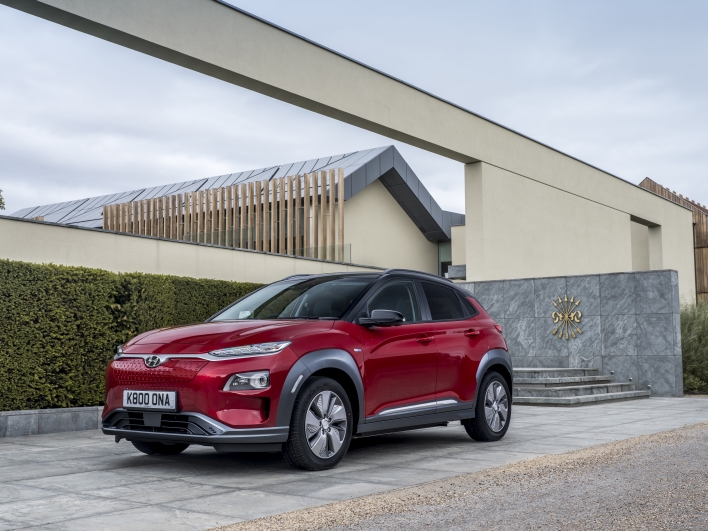 Setting out to compete with the more affordable end of the market in EVs, Hyundai have built a comfortable, compact SUV with a range that easily beats its current rivals, in fact it's even challenging the luxury end of the electric vehicle segment. Other manufacturers are due to bring out improved batteries and upgraded EVs with extended range in the near future, but for now at least the Kona EV is a very good horse to bet on.