When the original Range Rover Evoque was launched it was to much fanfare and hype. Its groundbreaking, for Land Rover, design did more than just turn a few heads. The Evoque quickly became and has remained a style icon. The new Range Rover Evoque has kept what was good about its predecessor and improved what was bad. Let’s be honest, the old Evoque wasn’t exactly great to drive, whereas Land Rover have made an impressively good small SUV here.
Pros
Cons

On a cursory first inspection, the new Range Rover Evoque shares more than a passing resemblance to the old Range Rover Evoque. The design team was conscious of ruining what was and is a style icon and so were very sympathetic to the original designs with their choices. Look a bit closer though, and you’ll find certain features that are influenced by the larger Range Rover models, especially the Velar. Wider front and rear lights and the pop-out door handles for example. The new Evoque has almost exactly the same exterior dimensions as the last generation, except for the wheelbase. But apart from the resemblance, every panel on this new model is brand new. 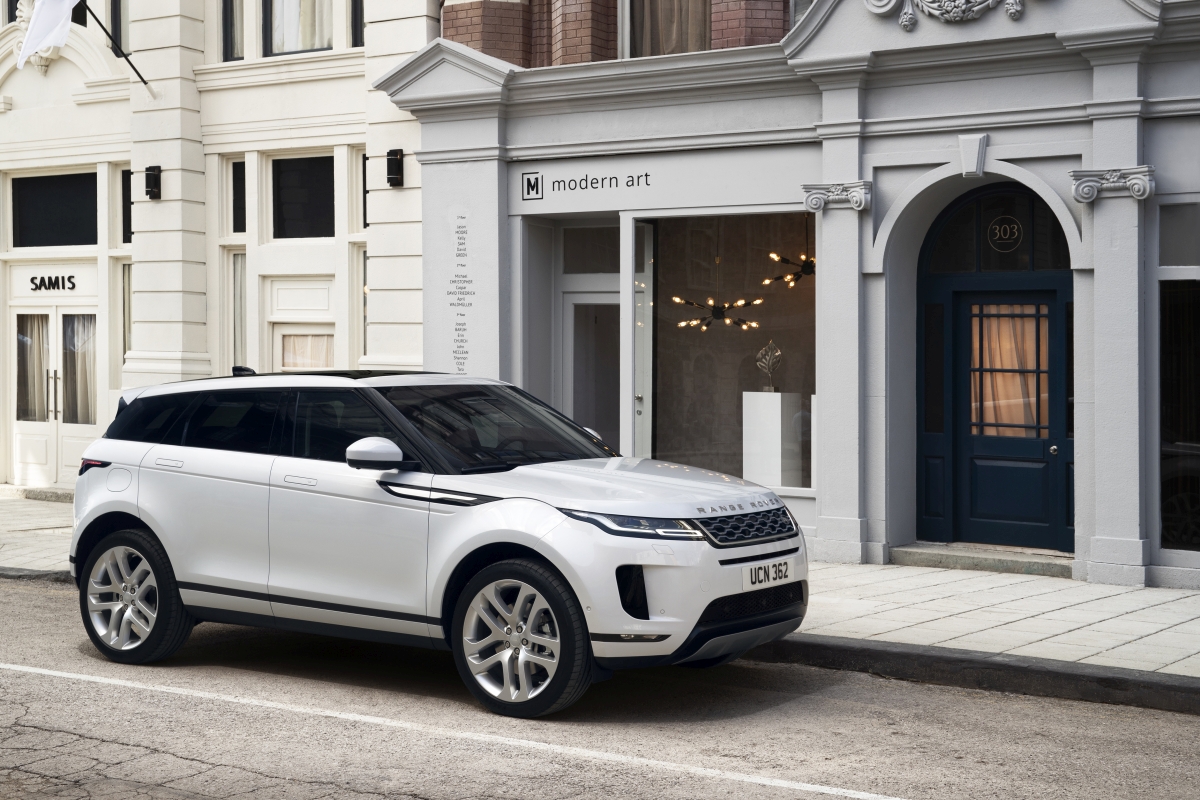 The Evoque is a good looking car from the outside. Inside it feels quite understated. They haven’t gone mad with bells and whistles for this interior. Everything looks like it’s in the right place and there’s no unnecessary clutter. The current creative director of Land Rover, a vegan and sustainability advocate, has spoken about the importance of sustainable design. Sustainability is at the heart of their current thinking. So though you can deck out your new Evoque in excellent quality leather, they are also offering a vegan friendly option with seats covered in a eucalyptus fibre blend fabric. Not vegan, but sustainable is the other alternative, a wool blend which includes fibres from recycled plastic.

The distance between front and rear axles has been increased, the main benefit of which has been a large increase in space for rear passengers. Sitting in the back seats of the old Evoque was a little cramped, whereas now there’s plenty of headroom. The rear seats have a good 40-20-40 split set up. So you can drop one or all of them to get a relatively sizeable luggage capacity of 1383 litres.

Included as standard is a 10 inch touch-screen infotainment system placed centrally on the dashboard. Upgrading will get you a better processor and more connectivity including Apple CarPlay and Android Auto. Also optional is a second lower touchscreen which allows for climate controls and other in-car options. 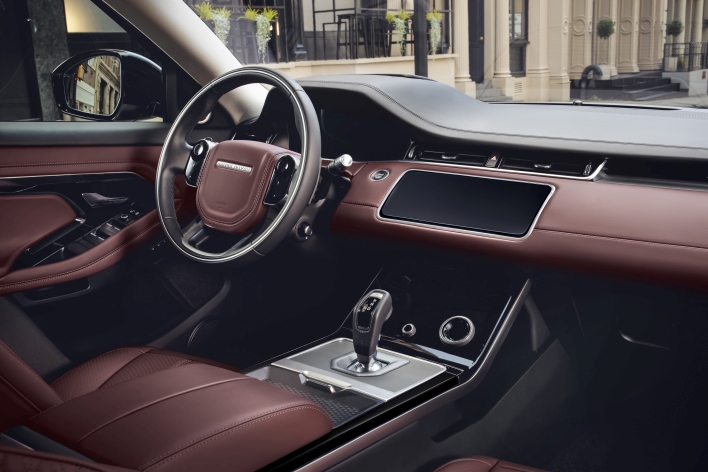 All the available engines have the same 2 litre displacement but vary quite widely in power. The least powerful in the range is the diesel, D150 which delivers 150 metric horsepower, about 147 bhp, and, from June, can be selected with the only manual gearbox in the range. This is also the only option that will come with front wheel drive. All the other engines are paired up with all-wheel drive, automatic transmissions.

The D150 is optimised for the best fuel economy in the range. If you’re after something a bit more sprightly, you’ll want to opt for one of the more powerful engines. The most popular choice in Ireland will most likely be the D180. It’s a good balance between economy and power. With a metric power output of 180 PS (177 bhp), you get a bit more bang for your buck. You’ll be able to tow an extra 400 kg and it shaves over a second from the 0-100km/h time.

The full range of choices are three diesel options and three petrol options. The naming conventions are relatively straightforward, either D for diesel or P for petrol, followed by the metric horsepower they output. So, the list is as follows: D150, D180, D240 and P200, P250, P300. 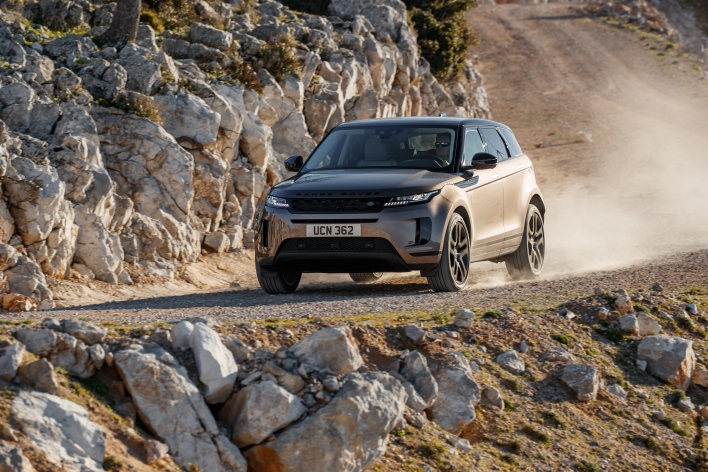 As with any car, your choice of optional extras, engine and trim will have an impact on the fuel efficiency and general running costs of your car. But looking at what will most likely be the popular choice in Ireland, the D180 engine coupled with a 9 speed automatic gearbox, we can examine a few stats.

The combined fuel efficiency figures come out to almost 50 miles to the gallon. CO2 emissions are around about the 150 g/km mark placing the new Evoque into the €390 annual road tax bracket. 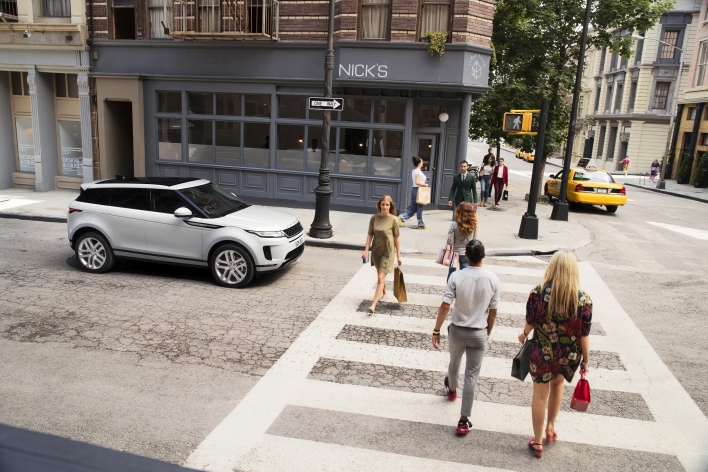 The old Evoque wasn’t the best car to actually drive. You might have looked great in it but if you wanted to do anything more than occasionally pop down to the shops, it probably wasn’t the car for you. The new models are massively better.

With the height and weight of the Evoque, you might expect it to be fairly lumbering around the bends. But steering is vastly improved over the previous generation, cornering is easy. You have a much better sense of connection to the road with better grip.

If you do have to go off-road, you’d be in more capable hands with a Land Rover than the competition. Off-road, you can expect a fairly good drive, with most of the complicated bits handled by the Evoque’s computer. With the adaptive suspension and intelligent all-wheel drive system, the car will calculate where and when to send power depending on which wheels need it most. You might not want to take the Evoque trekking across the treacherous boggy fields of Connemara, but if you do want to experience a bit of gentle hill climbing you’ll be absolutely fine with this. The Evoque has pretty good ground clearance for the small SUV class. In fact, it will gladly wade through water up to 600mm and still be fine. 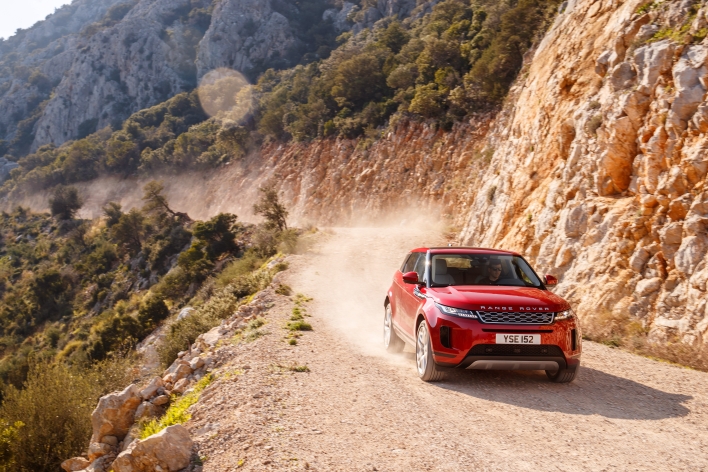 Euro NCAP awarded the last generation of Evoques the full 5 star safety rating. So we weren’t in much doubt that the new line would score well too. As expected, the 2019 tests concluded with a new 5 star rating. The Evoque received improved scores for the safety of adult and child occupants and to the safety of pedestrians. In fact the new Evoque has received the highest scores of any Land Rover so far for the safety of its occupants.

When the original Range Rover Evoque was launched it was to much fanfare and hype. Its groundbreaking, for Land Rover, design did more than just turn a few heads. The Evoque quickly became and has remained a style icon. The new Range Rover Evoque has kept what was good about its predecessor and improved what was bad. Let's be honest, the old Evoque wasn't exactly great to drive, whereas Land Rover have made an impressively good small SUV here.