Way back in 2015 Audi unveiled a concept car at the Frankfurt Motor Show that would eventually become their first fully-electric production vehicle. In September last year, they unveiled its final form in San Francisco and the first orders are due to arrive in Ireland soon. Though it’s a first for Audi, they’re not alone in their aspirations.
Comparisons are going to be drawn between other electric mid-sized SUVs also recently launched. The e-tron’s two main competitors being the Jaguar I-PACE and the Tesla Model X.

So how does Audi’s first foray into the fully electric vehicle world hold up?

So, starting with the basics.

From the outside, you’d be forgiven for not realising there’s anything overly special about the e-tron. The Audi family resemblance is pretty apparent. The e-tron sits comfortably into the slot between a Q5 and a Q7. A bit bigger than the Q5 and a bit smaller than the Q7. Other than a few, not unattractive, strips of metallic detailing the only real giveaway that this is a different beast is the wing mirrors.

Or should I say, lack of wing mirrors.

Rather than traditional mirrors, you can opt for virtual exterior mirrors.  These consist of two cameras mounted on stalks that communicate with two internal touch screens, giving you a live feed of the part of the road you’ve angled the cameras at. Audi say, these virtual mirrors are more aerodynamic than traditional mirrors and so improve the overall efficiency of the car. Opting for the cameras over traditional mirrors does shave about 6 inches off the overall width. The cameras can also apparently do a better job showing you what’s going on when it’s raining. The cameras are protected from the elements, meaning the live feed should be clear of streaks of water. No more leaning out the window with a cloth you’ve found in the bottom of your glovebox.

Audi are the first manufacturer to include this option on a production car. Though we don’t think they’ll be the last. There have been a few concept cars with this technology, and we’ve seen the VW Group use Audi as a test case for entering new technology into the marketplace before. The virtual cockpit they rolled out in top-end Audis first is now becoming standard across the group for example.

Realistically, these won’t be for everyone and, as is not unusual for Audi, if you want them you’ll be getting your wallet out. Virtual mirrors will set you back a further €1600 and change.

Mirror-less side mirrors aside, as standard the e-tron is a good looking creature.

If you do opt for the virtual mirrors, the dashboard will come with a total of four touch screen displays. The infotainment system has its 10-inch centre-console display. There’s a separate screen underneath that for the climate controls. And, with the virtual mirrors come two more 7-inch touch screens to display the interpreted content from the wing side cameras.  Behind the steering column there’s another digital display, the virtual cockpit that the VW Group are rolling out in pretty much all of their newer models these days.

For anyone who’s driven a newer Audi before the interface will be somewhat familiar. The virtual cockpit and controls on the touchscreens aren’t specific to the e-tron, apart from a few menu items dealing specifically with the charging functions. But for anyone new to Audi’s modern digital interfaces they can be somewhat overwhelming at first. And, it’s not always immediately intuitive where to find specific menu entries.

Overall, the build quality in the interior is impressive. Everything is great to the touch and feels very high-end. 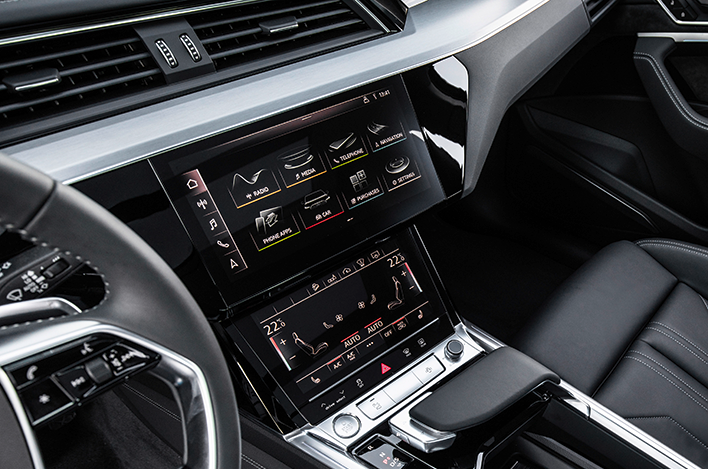 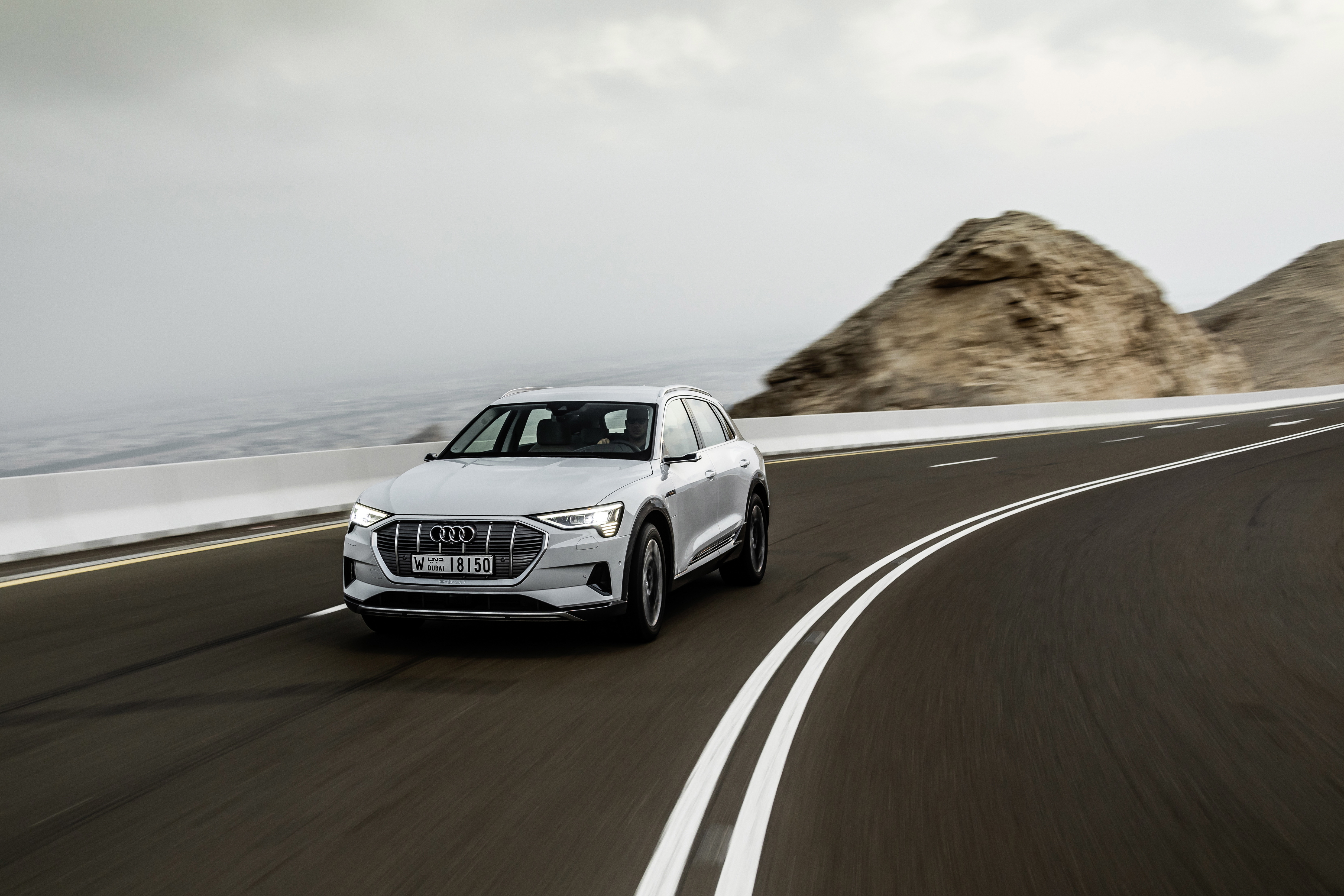 The e-tron has a 95 kWh battery compared to the I-PACE’s 90 kWh but in almost all the tests, the Audi has been shown to have a bit less range between charges. Real world conditions will never compare to what researchers and car manufacturers find in their experiments, but it seems likely that Jaguar have Audi beat on this one. American tests gave the e-tron a range of 204 miles compared to the I-PACE’s 234 miles. The WLTP (worldwide harmonised light vehicle test procedure) scores for both are better. The I-PACE scored a range of 291 miles on these tests with the e-tron falling a little shorter with 259 miles.

Charging time is about 8 1/2 hours for a normal, at-home charge. But if you use one of the public 150w charge points you can bring the battery up to 80% in a speedy 30 mins. 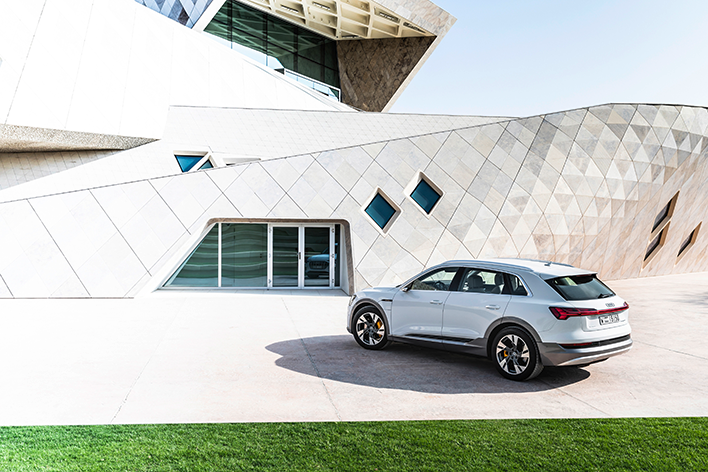 SUVs are designed, on the whole, for going slowly around cities. Leisurely bumper to bumper journeys in rush hour with a gaggle of screaming children in the back whilst you’re shaving or doing your make up in the rear view mirror.

Where the e-tron really comes into its own is how well it can adapt to other environments.

Now, I always thought SUVs should be for off-roading. Over the years I’ve come to realise that most SUV manufacturers don’t agree with me. It seems like someone in Audi has been thinking along the same lines as me. Audi claim the e-tron should handle perfectly no matter the conditions. They state these conditions include wind, rain and snow, off-road and on. It’s not surprising for car manufacturers to make grand claims about their new vehicles. What is surprising is that Audi seem to be telling the truth with the e-tron.

It excels over its electric competition (the I-PACE or the Model X) when it comes to ground clearance and it can actually comfortably handle pretty extreme terrain. 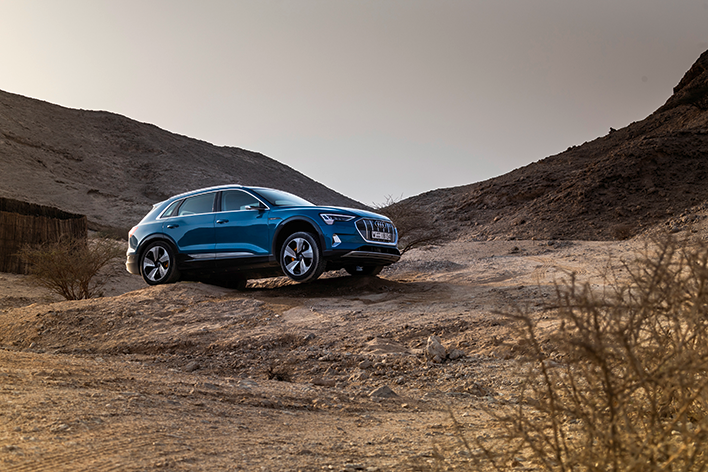 From the outside, Audi's first all-electric offering doesn't look wildly different from anything else currently in its stable. On the inside, they've done a lot of work to make sure you won't lose out on the amount of car you get just because you've opted for a greener model. On the road, the e-tron handles like any other large Audi, with pretty impressive specs considering its size. Off road it handles better than most other SUVs, let alone other current generation electric cars. In recent trade shows, Audi have been showing more and more electric vehicles, they have another few in the pipeline that they say will be reaching production soon. All going according to plan, they will have 5 all-electric production vehicles by 2021. If the quality of the etron is anything to go by, we're looking forward with anticipation to the next one off the line.