The standard Skoda Kodiaq was released in Ireland in 2017, and last year was the 5th best-selling SUV in the country. This year Skoda have released a new model with a bit more bite. The Kodiaq RS has the most powerful diesel engine ever fitted to a production model Skoda, and to go with it they’ve upgraded their SUV with a sportier trim and pretty stylish exterior looks.
Pros
Cons

With added side skirts, a gloss-black front grille, 20-inch wheels and massive 17 inch brake pads, come chromed twin exhausts (these are purely cosmetic but do the job of reinforcing the look of sportiness). Everything about the exterior of the new RS feels a bit more rugged, a bit more aggressive than its siblings. 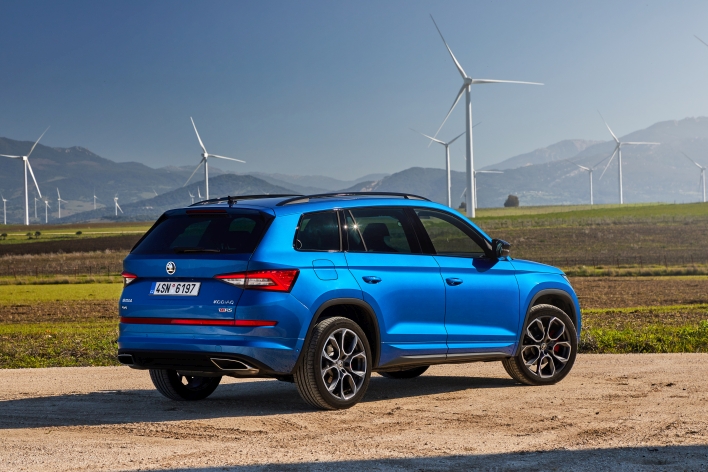 The interior is similar to the rest of the Kodiaq range in some respects, with nice soft-touch plastics on various surfaces, everything has a feel of quality about it. But Skoda have added some features to make sure you know you’re inside something a bit more special. Leather and microfibre bucket seats with embossed vRS logo, red stitching to the steering wheel and upholstery.

The virtual cockpit is a nice feature, not quite as fancy as the Audi versions but there are quite a few modes and being able to have the speedometer front and centre adds to the feeling that this is a sports model. One of the best features of the virtual cockpit though, is being able to display a large, easy to follow to map for navigation.

This is an SUV so you would expect there to be plenty of space, and there is. In Ireland we can opt for a 5 or a 7 seater version of the RS, the passenger seats in the 7-seater version can be shifted into a number of different configurations, allowing for plenty of room for your passengers and any luggage.

There are some thoughtful details with the interior, such as luggage hooks in the boot, cargo nets for containing loose luggage, and umbrellas stashed in the doors – out of the way but easily accessible.

One bone of contention for some people is the inclusion of a system that enhances the sounds of the engine by playing artificial engine sounds through the car’s stereo. Purists may believe this isn’t necessary but it is a feature that seems to be becoming more common across the industry. 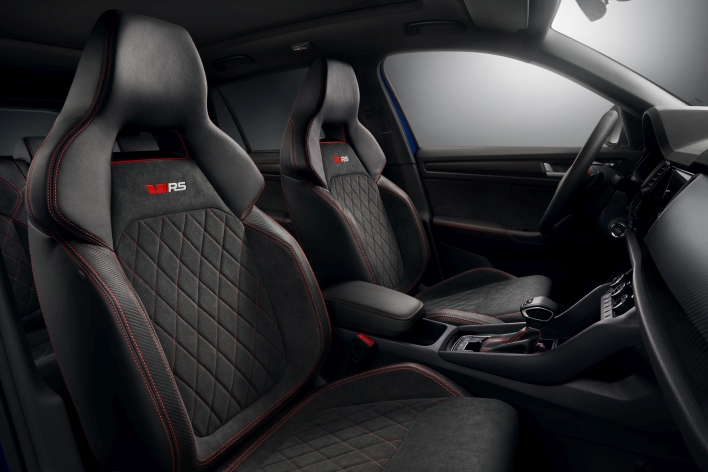 It is surprisingly quick and surprisingly powerful. With a 0-100 time of 7 seconds and a top speed of 220km/h it’s not exactly slow for a car of this size. That’s not too surprising as this is the most powerful diesel engine ever fitted to a production Skoda.

It doesn’t put out unreasonable amounts of horsepower, and therefore won’t leave you staggered at its off the line speed, but the 500 N?m of torque means that this 2-ton SUV has a mid-range that will leave other cars behind you in an overtake manoeuvre.

And though this 7-seater won’t leave any hot hatches in the dust, it set an official record for the fastest 7-seater around Germany’s Nürburgring last year coming in at 9 minutes 23 seconds.

You may think it would be hard to talk about reliability on a model that’s brand new to the market, but when it comes to the Kodiaq RS you can actually make some pretty safe assumptions. This car is built on technology and mechanical parts that have been tried and tested throughout the Volkswagen group in their MQB programme. There shouldn’t be any surprises when it comes to the longer term functioning of this car. 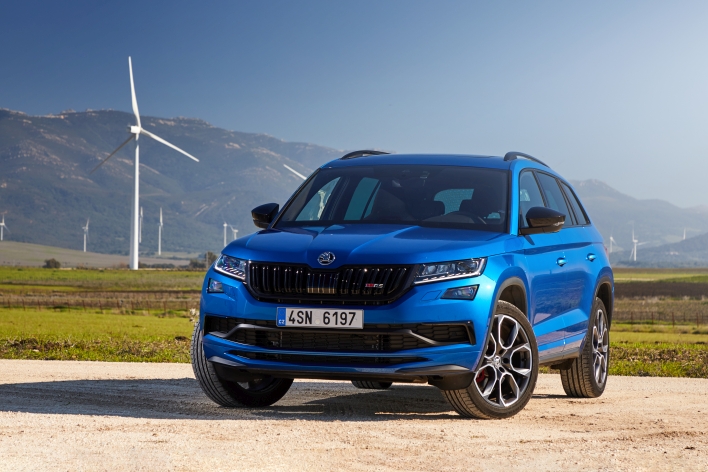 And on average it gets about 47 mpg. 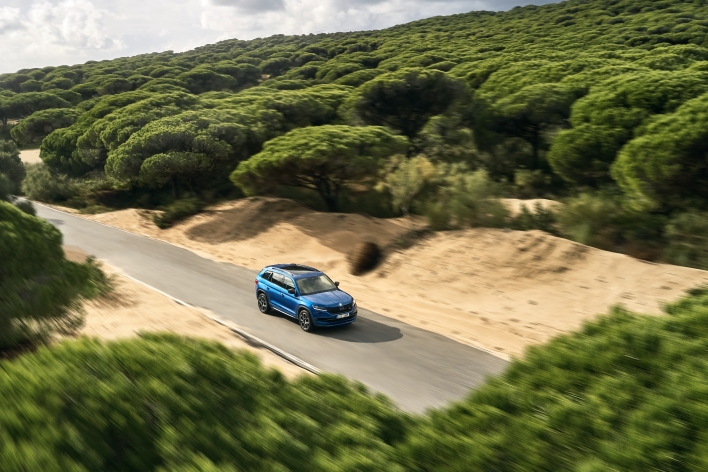 Great in the corners, competent in a straight line. For motorway driving this doesn’t feel too dissimilar to the standard Kodiaq, but when you engage sport mode and tackle some of our more interesting rural roads you’ll definitely feel the difference.

This car has dynamic chassis control so there are a good few settings that can be tweaked. In the firmest, sport mode the suspension is quite stiff. You won’t find this uncomfortable unless it’s still engaged when you hit a speed bump, at which point you’ll wish you were driving a bit more sensibly. 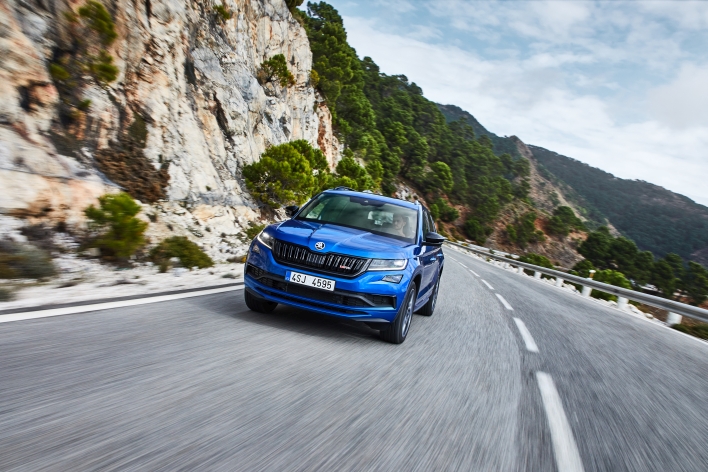 Skoda also provide a number of options that up the safety features even more. Everything from lane assist and driver fatigue sensors can be fitted to this model. 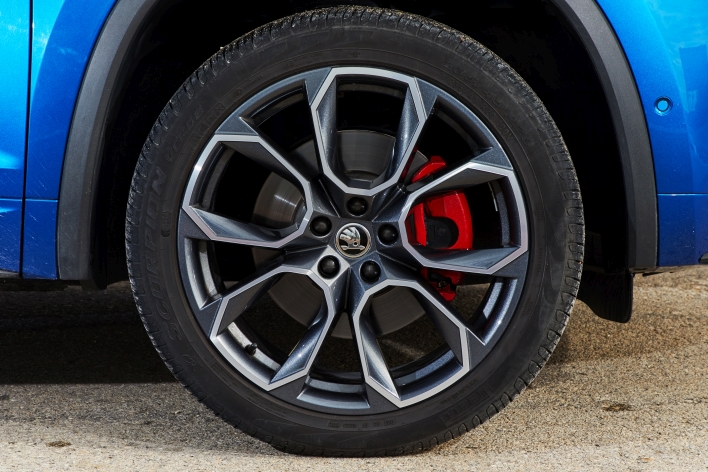 The more standard Kodiaqs have been growing in popularity in Ireland since they launched in 2017 and this upgraded, top-of-the-line model is sure to prove enticing for the driver who wants a little more spice.