BMW have completely redesigned their best-selling mid-sized SUV for its fourth generation, adding a host of new tech and a new, more attention-demanding look. A lot of the most attractive features are optional, but the base models offer fantastic drive comfort and a luxurious feel. The air suspension is perfect for Irish roads ironing out even the worst of the rural countryside’s potholes.
Pros
Cons

It’s hard not to notice the changes to the exterior of the new X5, it has a longer wheelbase, it’s wider and taller, and the with the new enlarged front grille, the 2019 model is finally demanding attention. The new, enlarged grill is immediate. This massive, new grill on the front isn’t just for looks though, the fins open to allow streamlined air to flow in and cool the engine, and when not needed, they remain closed to improve the aerodynamics.

The changes to the styling of the X5 range from previous incarnations are even more obvious when we look at the rear. The rear lights have been completely re-shaped following the contours of the car’s body and wrapping around the corners. The new BMW laser lights are a particularly cool feature.

I have to say sometimes it’s the little things that impress though. The smooth action on the electrically opening rear doors is oddly satisfying. The tailgate is split in two, giving a useful ledge when loading heavy items, though with a 650 litre luggage capacity, the lower part of the tailgate can actually be a hindrance when trying to reach something you’ve loaded right up against the seats. But being able to open and close the boot with the optional remote control means no more holding boxes of shopping in one hand, precariously balancing while trying to reach up and grab your SUV’s boot with the other. 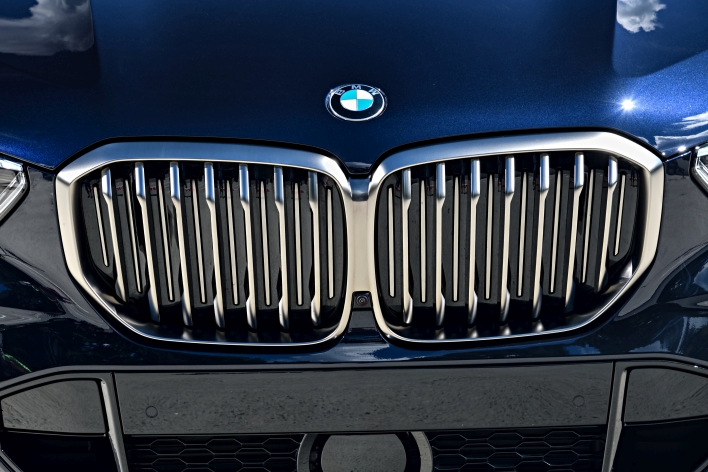 Many of the exterior stylings are carried through into the interior, some of these add to the feel of luxury, but all of them help to differentiate this new X5 incarnation from its predecessors, which though of top quality, could be accused of being, if not basic, then at least simple.

The digital dashboard read-out is stylish and in fact the entire front console looks more modern than a blockbuster sci-fi film, with smooth lines and integrated touch-screen and gesture controls. BMW’s iDrive 7 is the best infotainment system in an X5 yet, with smooth controls and a sensible layout, it’s pretty intuitive and thankfully, you won’t need to get your teenager to come with you to operate it. Couple that with the sharpest screen on one of these units yet and it means that maps and the views from the 3d outside cameras are as sharp as they come.

Though the touch screen and gesture controls are nice, BMW have chosen to keep a lot of the features controllable with physical buttons and knobs, they give a tactile quality that purely touch-screen controls wouldn’t and help to make you feel more connected to the car.

The driver and front passenger seats are incredibly comfortable, as you would expect from this price bracket, but the comfort of your back-seat passengers wasn’t an afterthought either. There is plenty of headspace and leg room, and though the rear seats don’t recline, you won’t get many complaints as to their comfiness.

The front seats have USB ports on their backs so keeping the kids’ equipment plugged in isn’t a problem, though they are USB C, so older devices will need an adapter. The seats also have handy slots that come with a range of adapters from a basic hook to a full coat hanger. 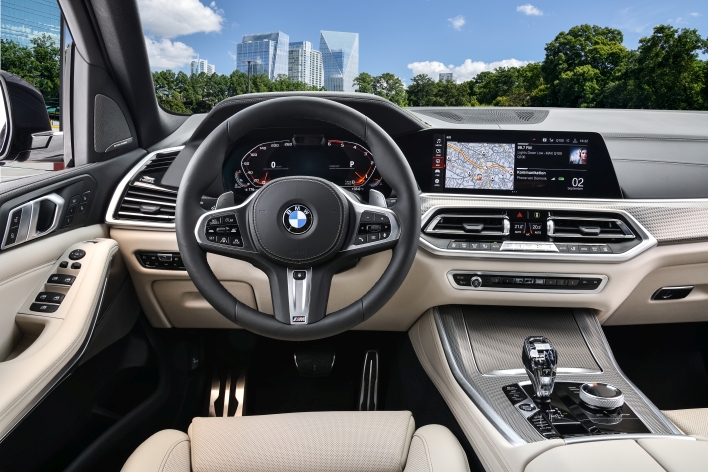 The M50d boasts a 0-100 km/h in 5.2 seconds, though most buyers will probably opt for one of the slightly more economical 30d models, which come in at a more leisurely 6.5 seconds. 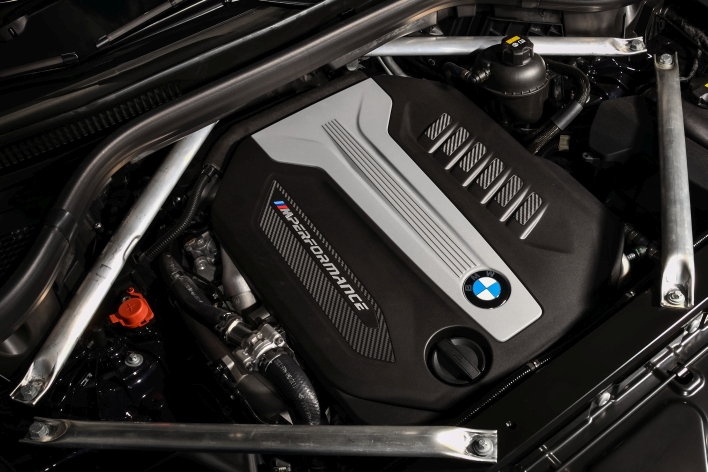 It’s probably a bit too early to tell with the current model, but based on the size of the X5 and it’s previous incarnations, it is liable to incur wear and tear and the odd electrical fault. There is the BMW 3 years standard warranty cover, with a nice uncapped mileage clause, and as usual with BMWs, you can opt for a fixed-price servicing scheme that works out roughly equivalent to the scheme for the Audi Q7. 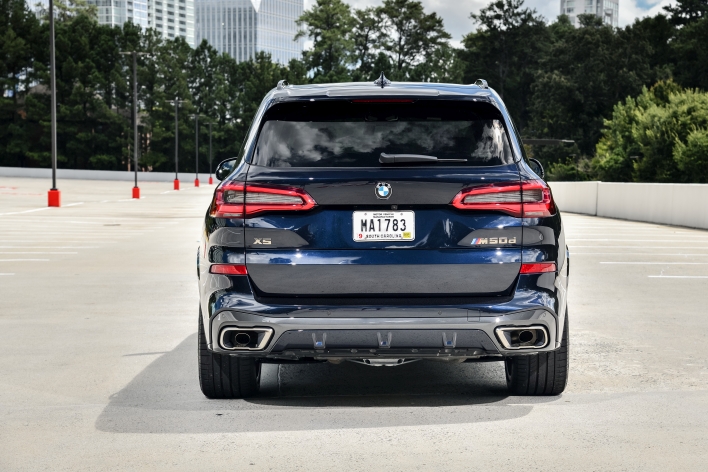 Filling the tank at today’s average fuel prices will set you back €102.  BMW state the xDrive30d consumes around a combined 7 litres of diesel per 100km and by its CO2 emissions, 183 g/km it will warrant the €750 tax bracket. 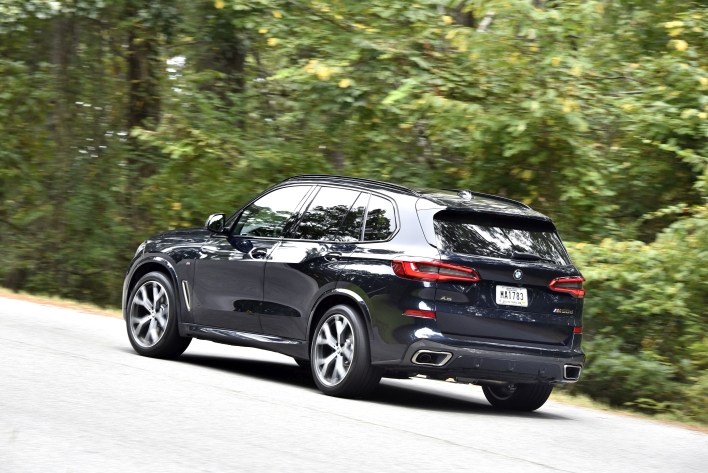 The X5 M50d handles as smoothly as you could ask, with the optional air-suspension covering any bumps in the road with a film of comfort meaning even a princess known for her unease with peas couldn’t ask for more. 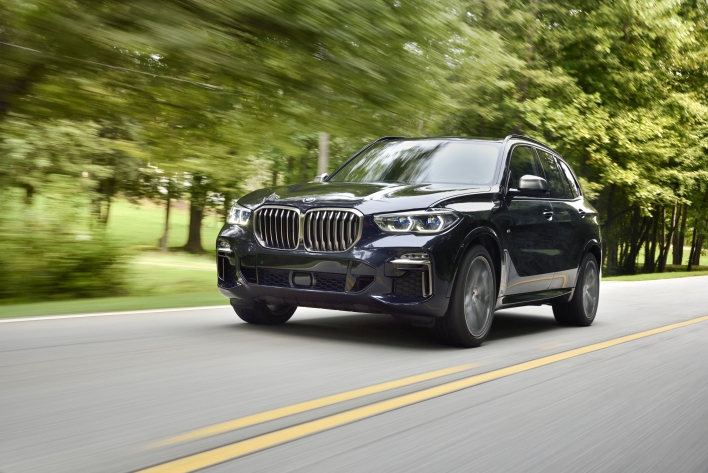 The X5s come with various driving assists that help to increase the safety of the driver, passengers and other road users. The active security package includes semi-autonomous driving functions help to keep the car centred in its lane and coupled with other safety features, like sensing if you’ve let go of the wheel, make for one of the safest cars on the road. In December 2018 Euro NCAP awarded the X5 xDrive30d a 5-Star safety rating.

Since the X5 launched back in 1999, more than 1.3 million units have been sold in the US and Europe, 2.2 million worldwide. It has gone through 4 iterations since then and been improving all the time. Everything it does it does well, though not exceptionally; there are faster SUVs (the Porsche Cayenne boasts a quicker 0-100), there are cheaper SUVs (the Volvo XC90 springs to mind), but the real stand-out feature of the X5 is the way it feels to drive. The comfort and quietness of this car when it’s on the road makes the drive a genuine pleasure.