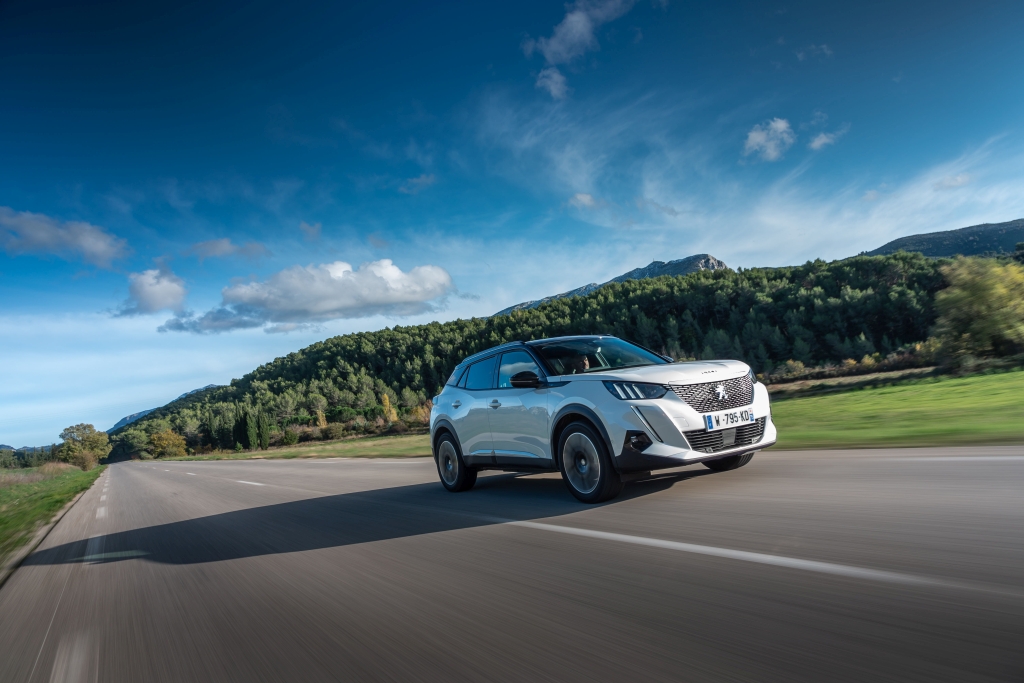 The power output of the Peugeot e-2008 is well established, having been used in the e-208 hatchback as well as the DS 3 Crossback e-tence and Vauxhall Corsa-e. It has the same combination of 100kW power and 50kWh battery as its rivals, making the total weight over 1.5 tonnes. The extra mass is all in the floor which is great news for handling and it means there is great room on board too for both people and luggage. Peugeot claim that a fully charged e-2008 will have a range of 200 miles and it appears for all intents and purposes to be an electric car that is every bit as easy to use as its petrol equivalent. With the combination of electric power and neat looking 3D dials, it feels positively futuristic.
Pros
Cons

If you’re a shrinking violet then the quirky looking e-2008 might not be the car for you. We love its inanimate features though and you could never accuse Peugeot of playing it safe with this particular design. Certainly not when the standard body colour at every trim level is a bright metallic orange, though a black contrasting roof and cool looking ‘claw’ headlights come with the top-end GT Line and GT models. Peugeot’s adventurousness with funky colours makes a refreshing change from the myriad of greys and whites that populate most of the 2008’s rivals. They should be commended for attempting to break the mold with the exterior of the e-2008 and they didn’t rest on their laurels when it came to the interior either. 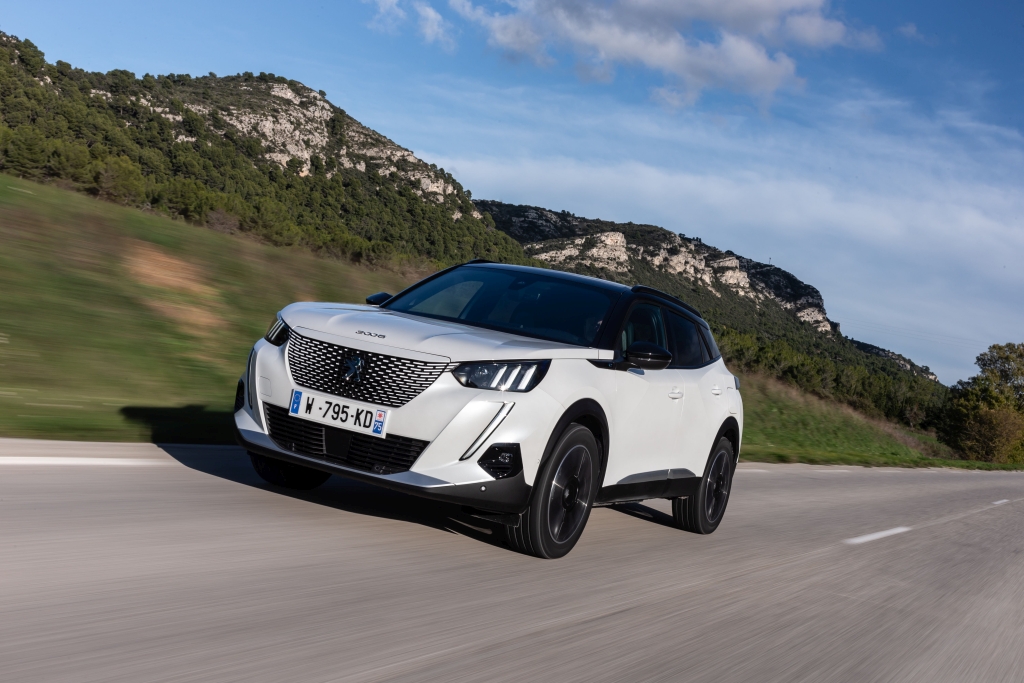 The ‘3D cockpit’ that comes as standard on all but the base-spec 2008 takes the now commonplace digital instruments and adds a double-layered, holographic effect, something Peugeot informs us reduces 0.5 second from drivers’ reaction times. There are other goodies too including no less than four USB ports – one of them in the new USB-C format – as well as inductive charging, so you and your passengers’ devices will never be short of energy. There is 434 litres of luggage space in the boot which is roughly the equivilant of a standard petrol 2008. There is also a ‘hidden floor’ underneath, allowing to you keep your muddy garments or valuables out of harms way. There is plenty of space on board for driver and passengers alike. 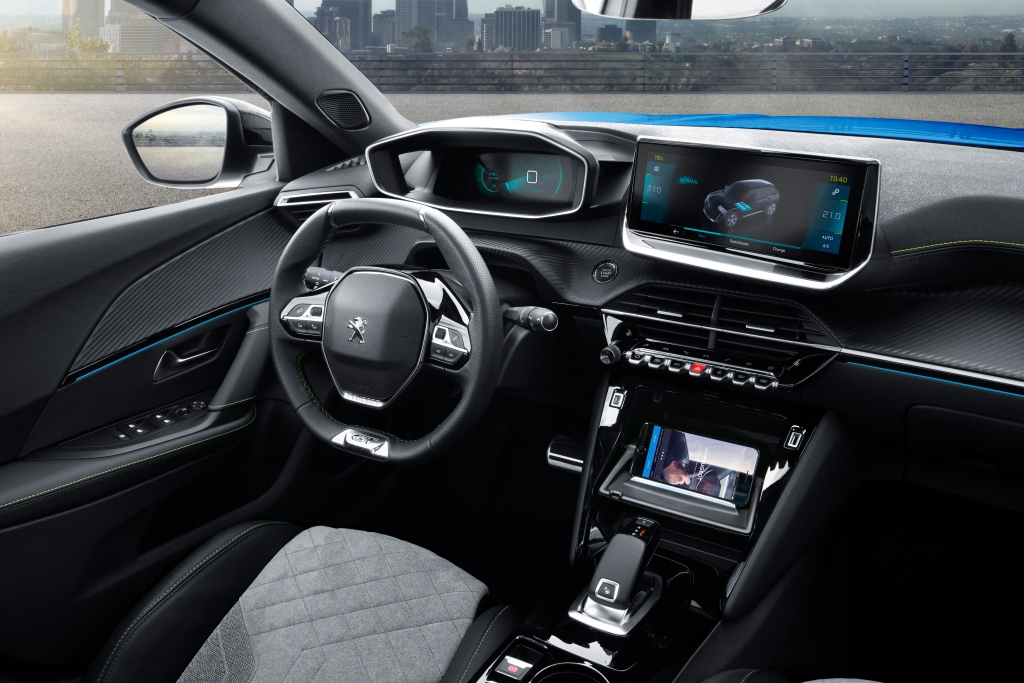 When driving the e-2008 you will be quite aware of wind and tyre noise as it is more noticeable without the usual engine sounds making it redundant. The Drive Mode allows the driver to toggle between Eco (80bhp), Normal (108bhp) and Sport (134bhp), balancing performance and battery range. The driving experience in Sport is surprisingly nimble with the power delivered subtly, though never enough to upset the front wheels unduly. Most drivers will probably keep it in Normal or Eco when the next charger appears too far to gamble on. 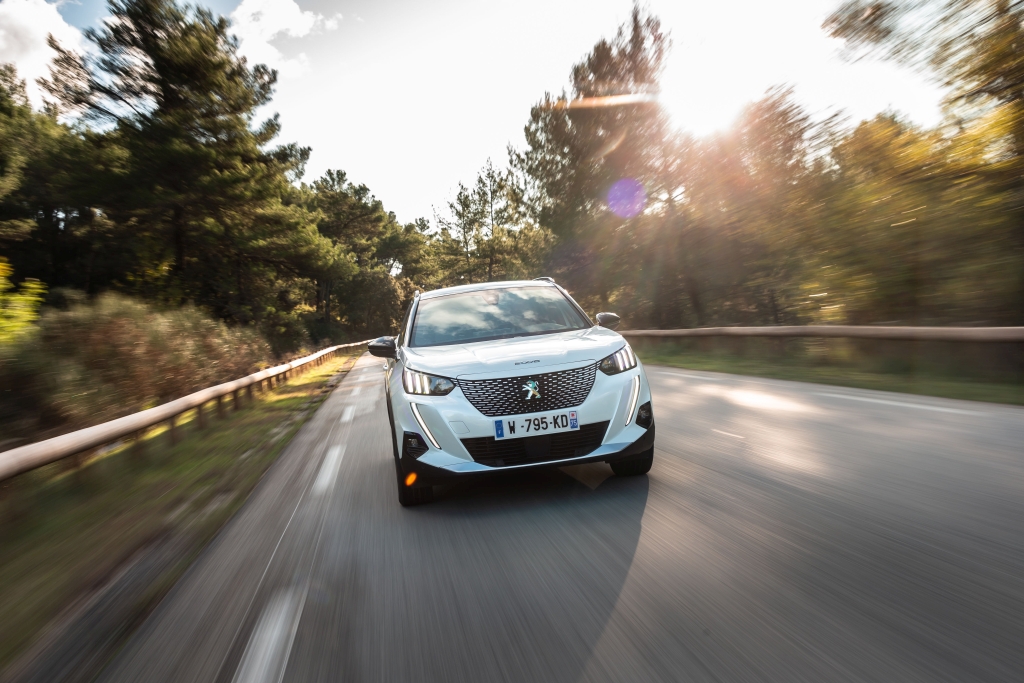 The battery comes with an eight year/100,000 mile warranty and potential buyers should take comfort from the excellent reliability record of the 2008’s bigger brother the 3008. 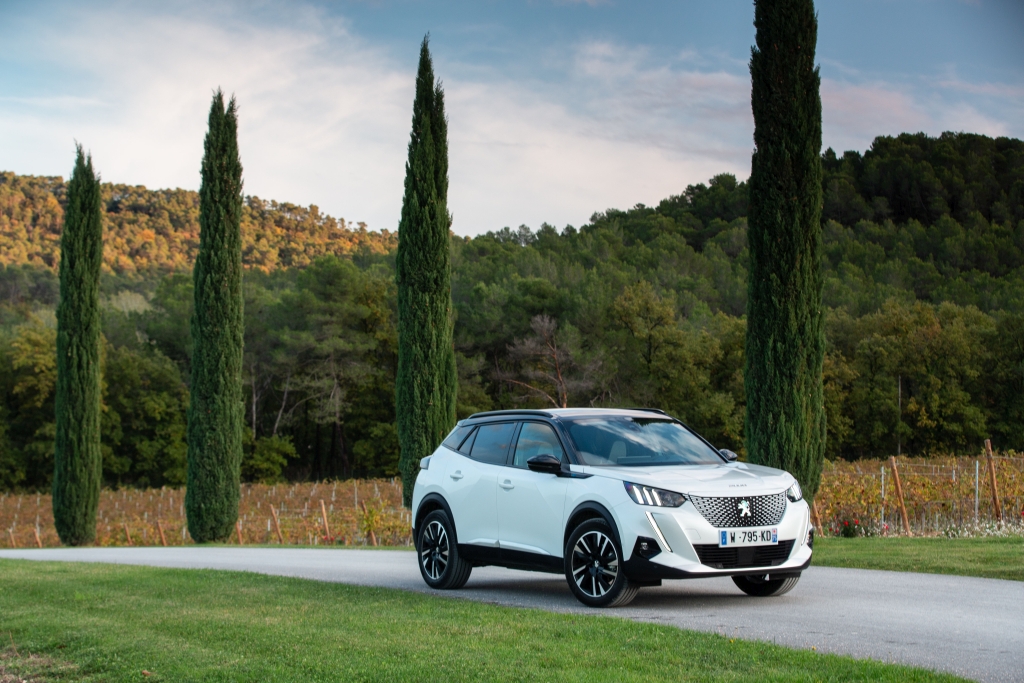 Charging the e-2008 at an Irish-spec three-pin domestic socket will take approximately 17 hours of your time. Peugeot are offering UK customers free installation of a home socket that’ll allow the e-2008 to fully charge in 7.5 hours but it remains to be seen if Irish dealers are as generous. Range is between 191 and 206 miles and servicing is every two years/16,000 mile, after an initial one year/8,000 mile interval. 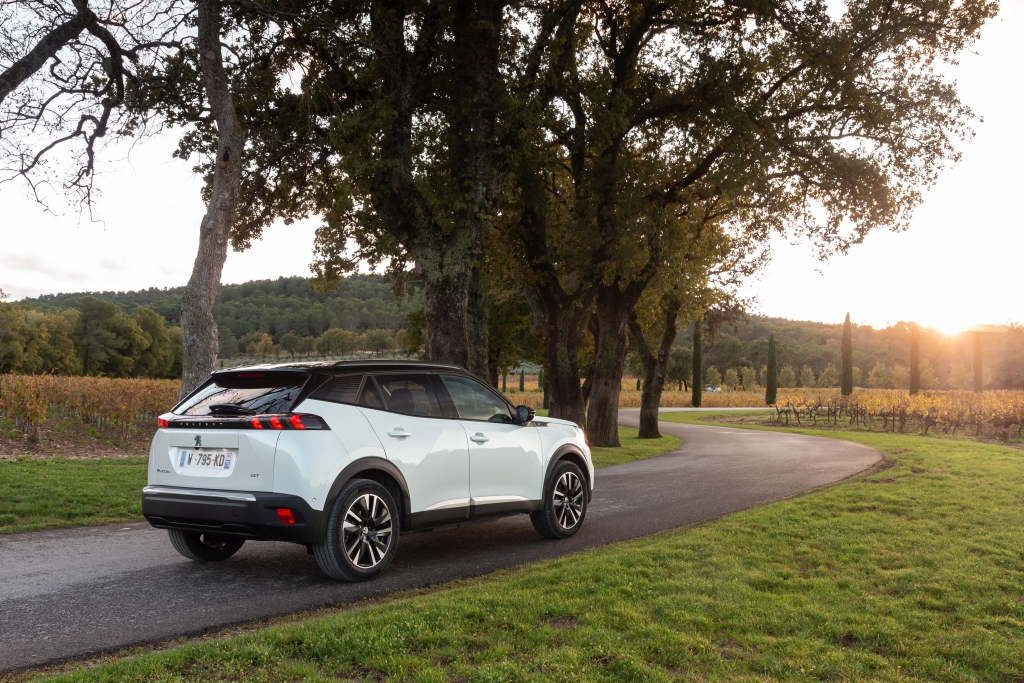 Whereas the ride quality of some EV’s has been questioned, the e-2008 bucks this trend and although it doesn’t offer as supple a ride as some of the legendarily comfortable French cars of years gone by, owners won’t be complaining come the end of long journeys either. 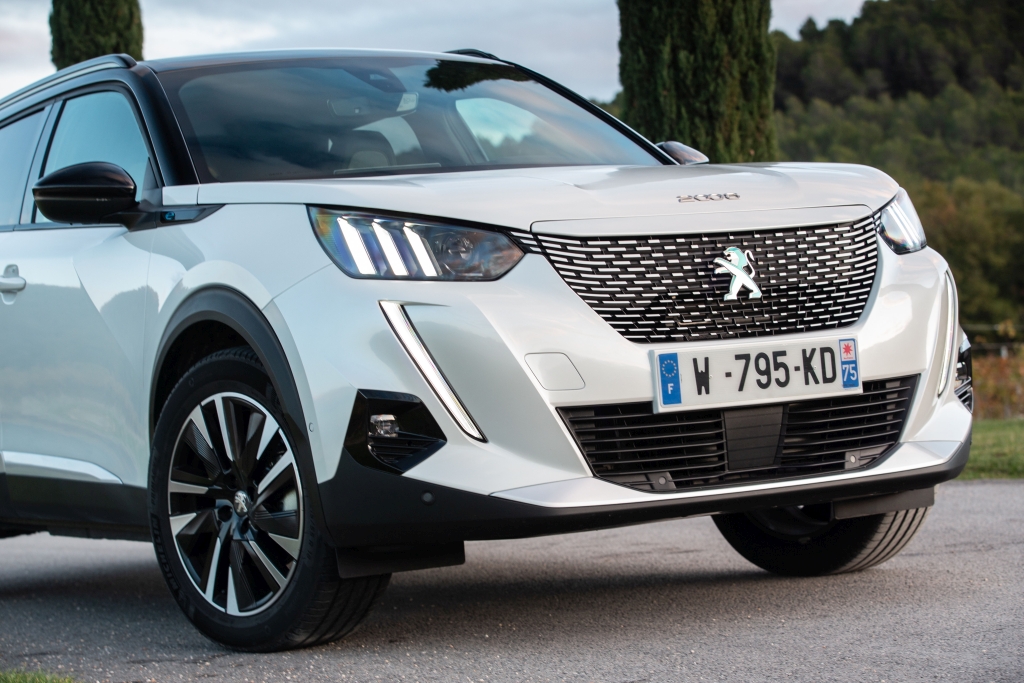 The 2020 Peugeot e-2008 was awarded a four-star NCAP safety rating which sounds alarming but the revamped tests have become much harder to ace and the 2008 only fell short in one area. 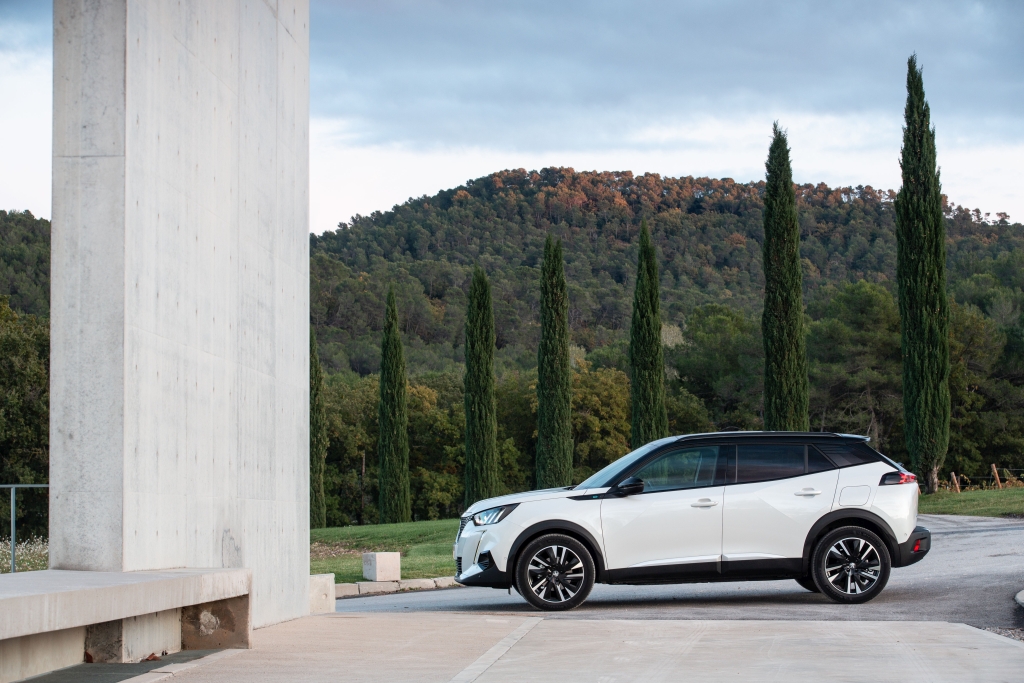 With a well established power unit, decent range, and a funky interior + exterior design, the new e-2008 from Peugeot looks set to turn heads and a few opinions.