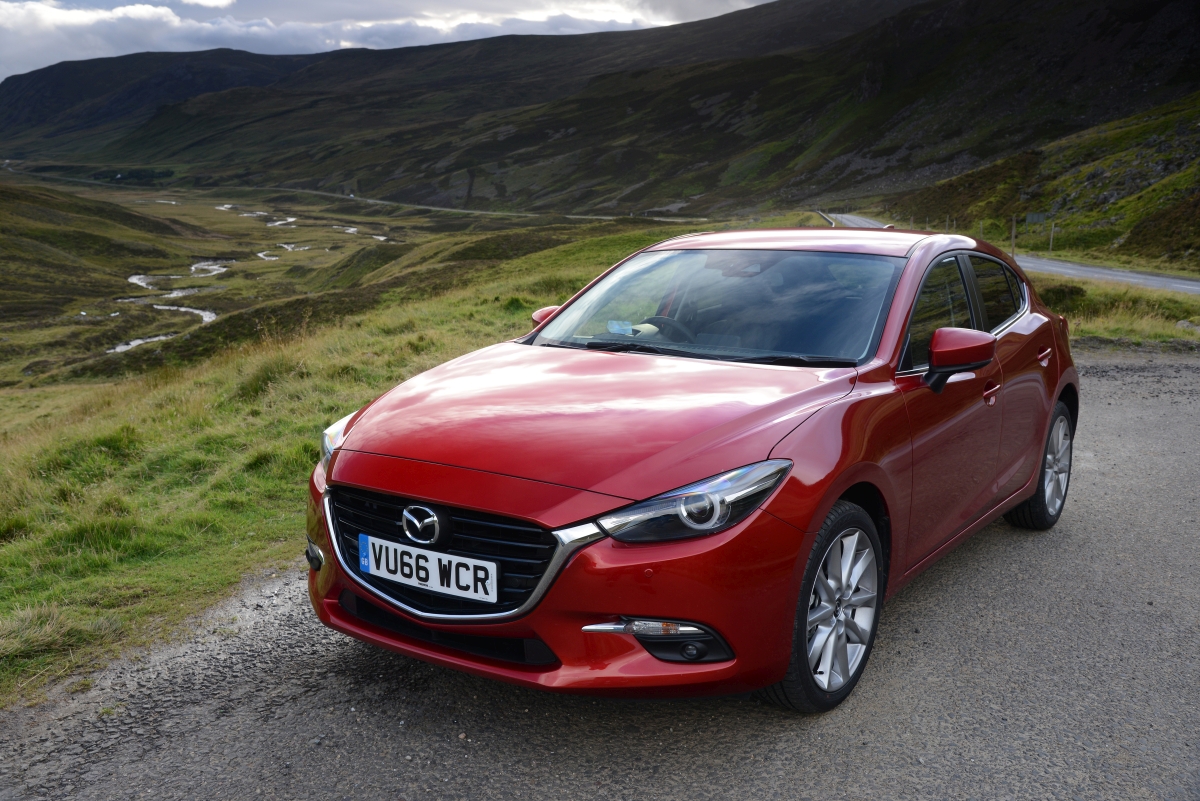 The Mazda 3 made its debut in 2003, and since then, more than 6 million have sold globally. The all-new Mazda 3, arriving in Ireland in April, will be the fourth generation of this popular model. The design team have overhauled everything about the car, with new exterior looks and a new generation of engines arriving soon.
Pros
Cons

The new exterior is based on Mazda’s design philosophy, their thinking is that a car should be more than just metal. It should embody the power and elegance of a wild animal as it is pouncing on its prey. What this equates to is an exterior that is more organic than some of its competitors. The 3 has a fluidity to it and a grace while still looking quite funky and fun. It’s very Mazda. 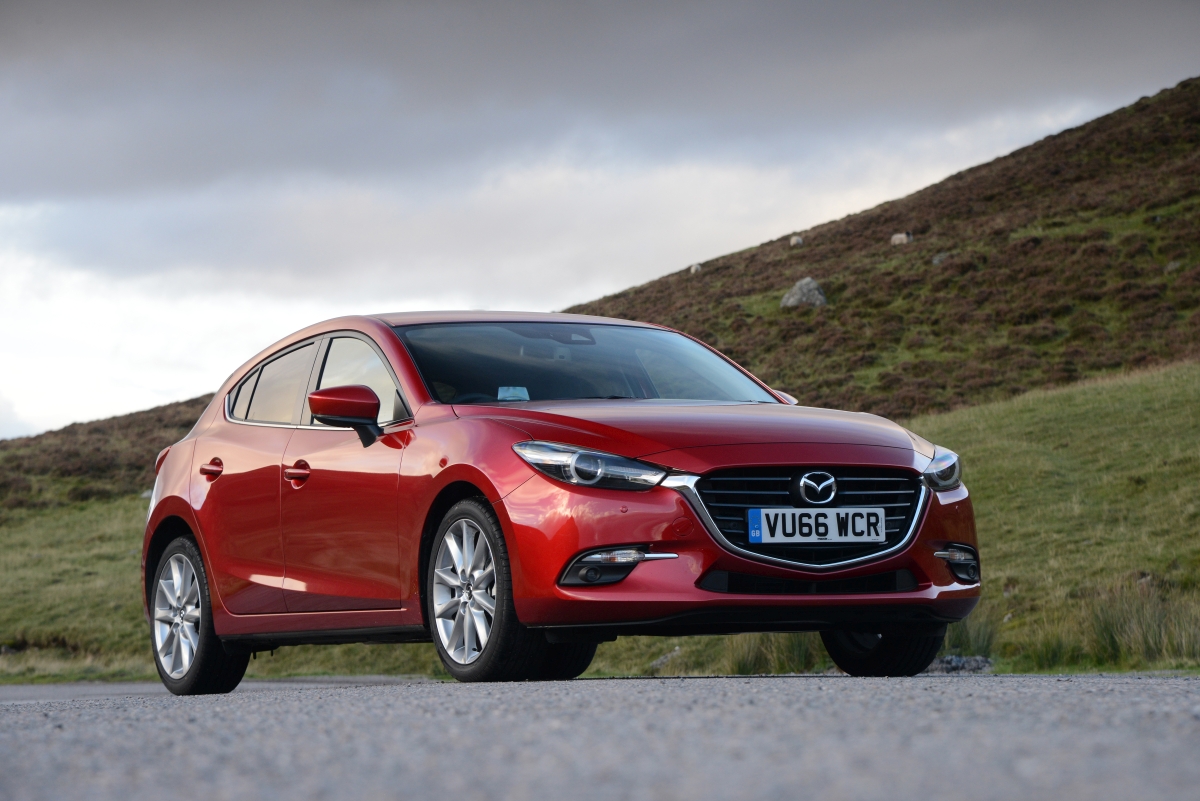 The cockpit feels uncluttered. Everything is where it should be and within easy reach from the driver’s position. The dashboard is uncomplicated, elegant. Speed and traffic signs are displayed via a 7 inch TFT screen. And though digital, this display feels comfortingly traditional. There’s a pretty impressive range of features as standard as well.

A centrally positioned 8.8 inch colour screen displays the infotainment system, interestingly, this is not a touch screen. Instead, physical controls sit between driver and front passenger. These are intuitive and work well.

All trim levels come with at least 8 speakers which have been placed using “acoustic science” to give occupants the best overall sound. The highest trim level comes with a full set of 12 Bose surround sound speakers. Even with the sound system off the outside world is quite dampened. The new Mazda3 has more insulation than its predecessors and this is apparent. It really is very quiet when you’re inside, both stationary and on the move. 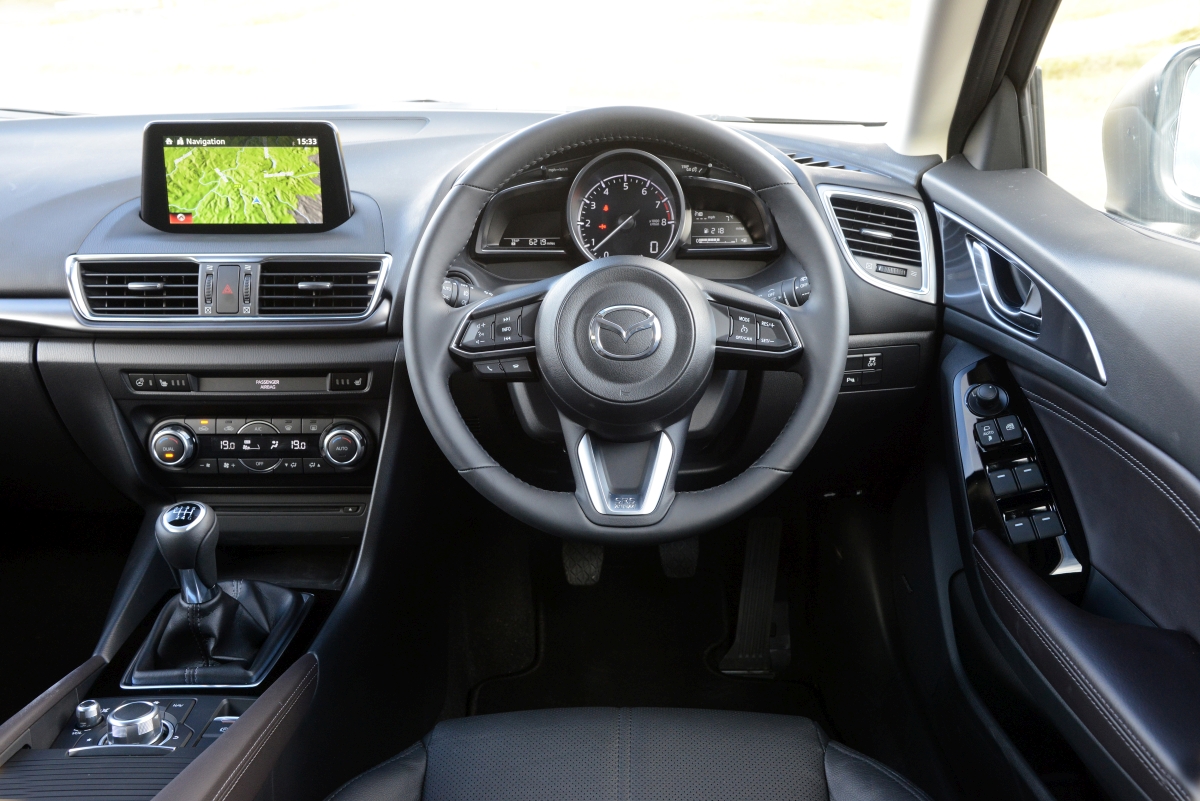 The Skyactiv-G petrol engine puts out about 120BHP. Opting for the manual version will let you accelerate from 0 – 100 km/h in 10.4 seconds, whereas with the automatic this becomes a slightly more leisurely 10.8 seconds. Both options have a top speed of 122 mph. The diesel engined Mazda 3 also comes in manual and automatic flavours. Both are marginally slower than their petrol siblings at top speed. The manual Skyactiv-D clocking up 121 mph with the automatic topping out at 119 mph. 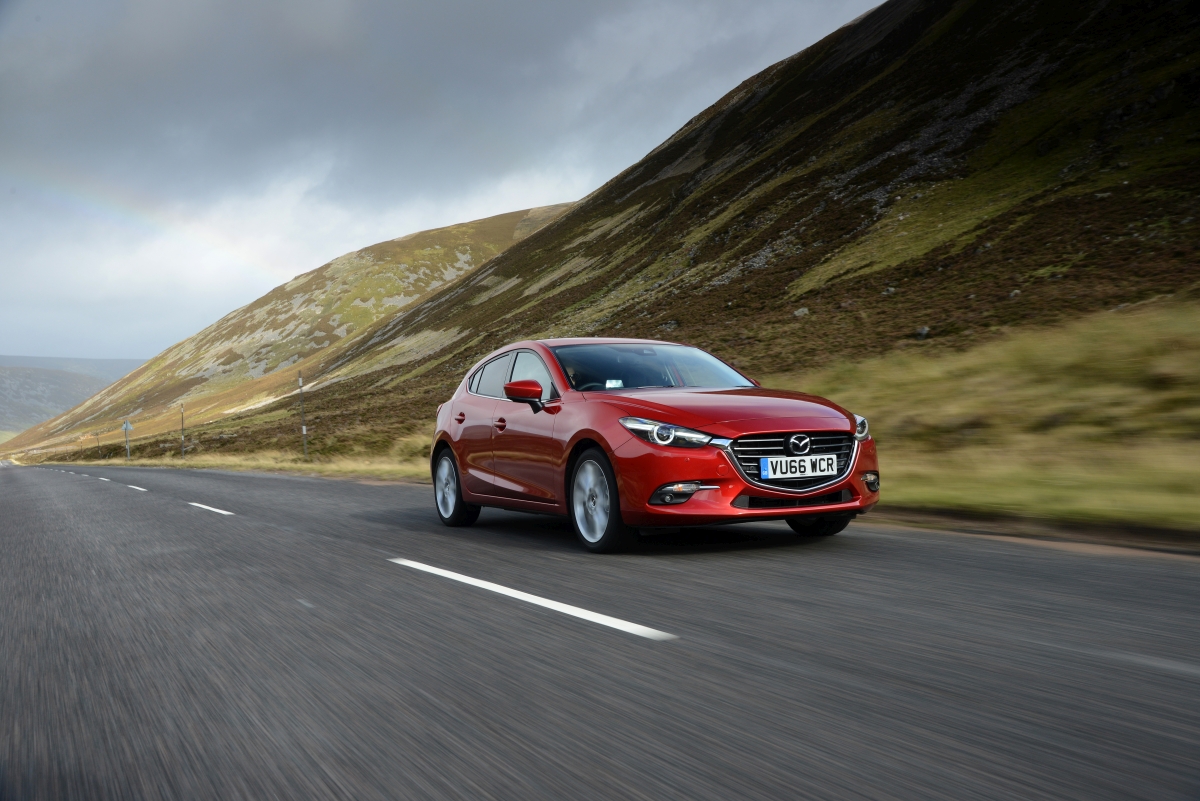 Mazda have long had a reputation for reliability. In some of the early models there were issues around build quality, but over the years, and especially with this all-new 3 everything has a feel of quality. Compared to some of their Japanese competitors, the interior feels luxurious, and you get an overall feel of durability with everything you touch. 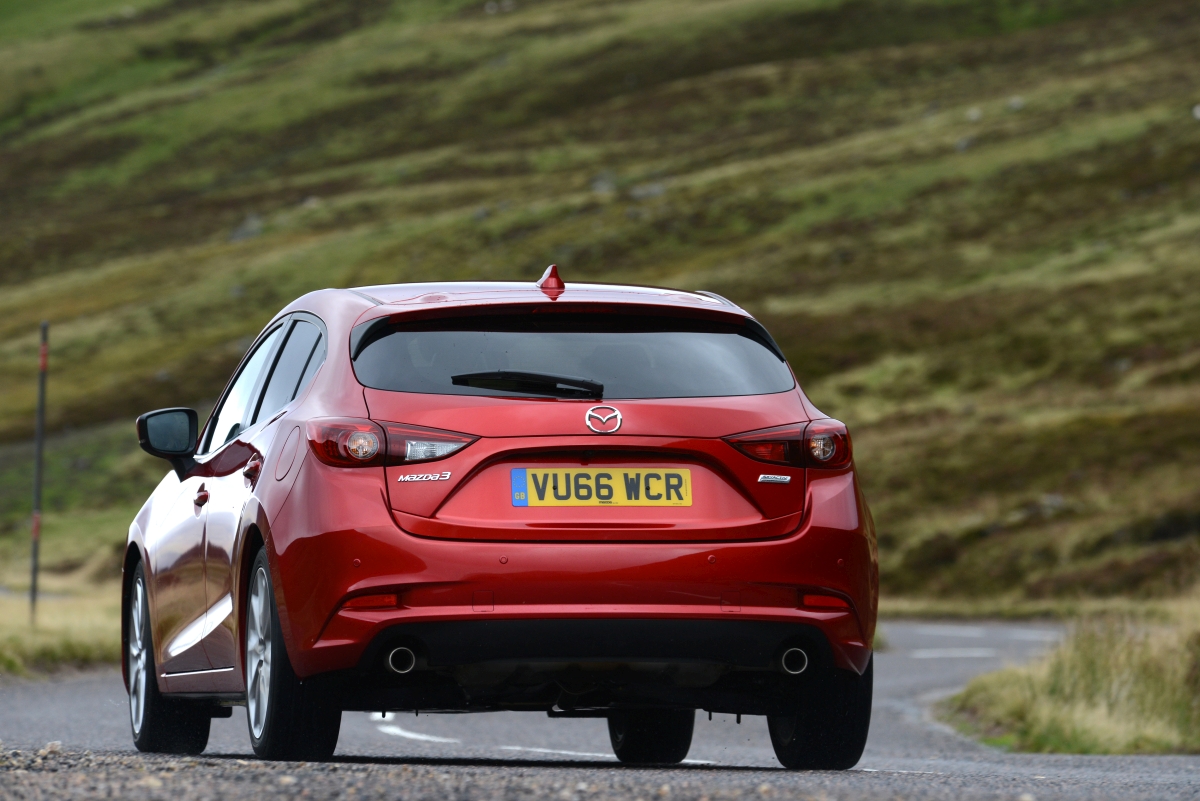 The automatic versions of the Mazda3 run slightly less efficiently and will output higher levels of CO2 than their manual counterparts. In the case of the diesel engine this is enough to jump from an emissions output of 107 g/km to 127g/km, jumping up two tax brackets whilst doing so. That’s an increase from €190 to €270 in annual road tax.

Fuel consumption is a similar story. In both petrol and diesel versions, a manual transmission system will see your fuel consumption decrease. The manual diesel engined 3 has an advertised combined fuel consumption of 56.5 MPG. The automatic version of the same engine cuts this down to 50.4. With the petrol engine we’re looking at a slightly less drastic decrease in efficiency. Here we have a drop from 45.6 MPG to 43.5 MPG with the switch to automatic.

All versions of the 3 are fitted with the same 51 litre fuel tank so a trip to the local garage will set you back around €70 at today’s average prices. Diesel will offer a small saving of about €2 on a full tank. 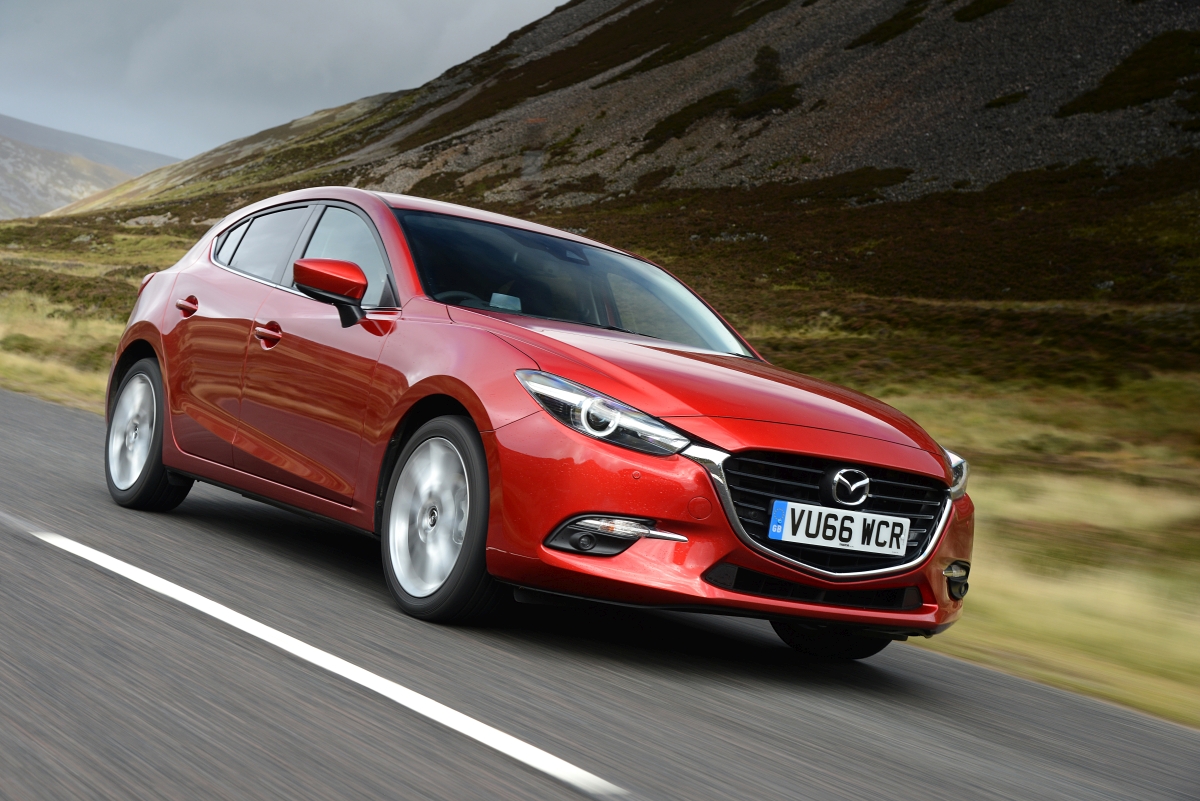 As with almost every other facet of this iteration of Mazda 3, there are improvements over the last generation. Mazda have stiffened the chassis, making for a much more comfortable drive. The car feels responsive and actually quite sporty. You can be a little more enthusiastic with this car and it wont feel like its going to fly off the road. Grip is good in the corners. The suspension smooths out even bad road surfaces. 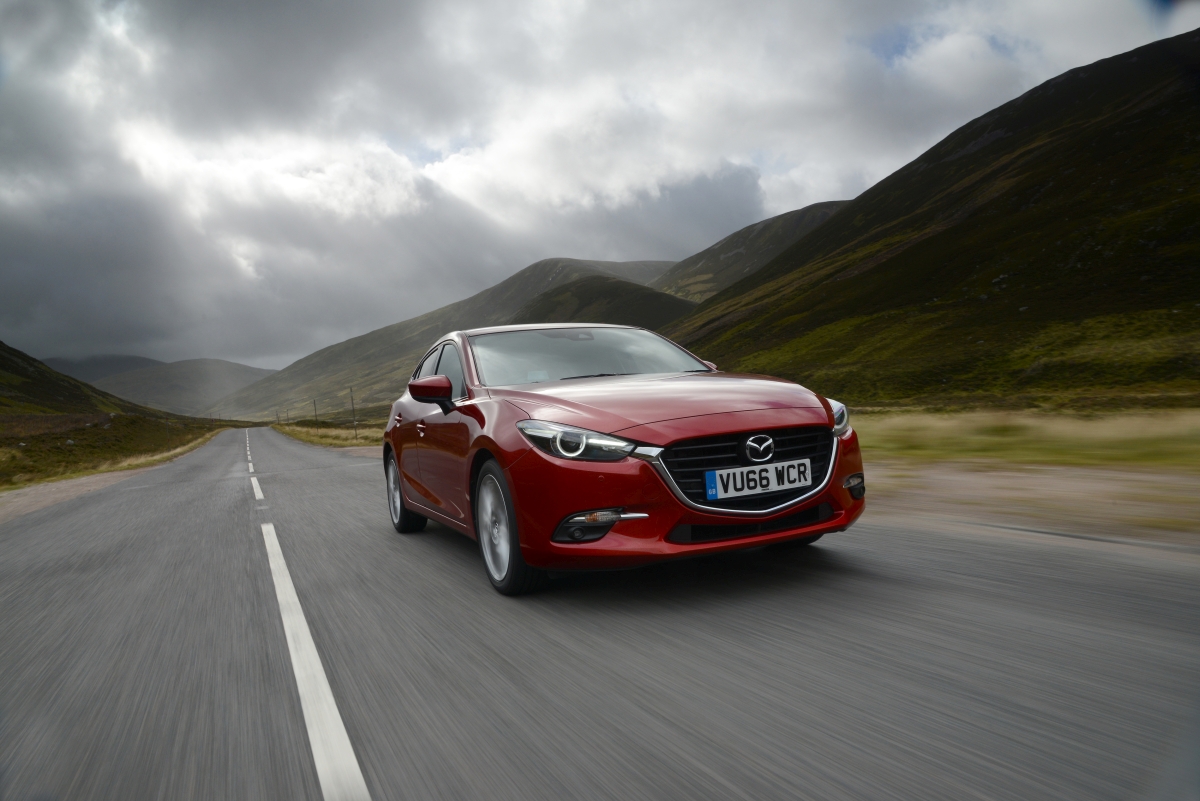 Euro NCAP awarded the previous generation of Mazda3 5 stars for safety. The new generation has improved on many of the features of the old models. And, whereas in previous generations certain safety features were optional extras, technologies such as lane keeping assistance and cross traffic alert are fitted as standard on all trim levels.

The 3 has long been one of Mazda's best selling vehicles, and with a complete redesign these fourth generation models look set to increase that popularity. Everything from the ground up feels like an improvement over previous generations. The hatchback versions of the 3 will be arriving in Irish showrooms from April with the "fastback" saloon version arriving later this year.