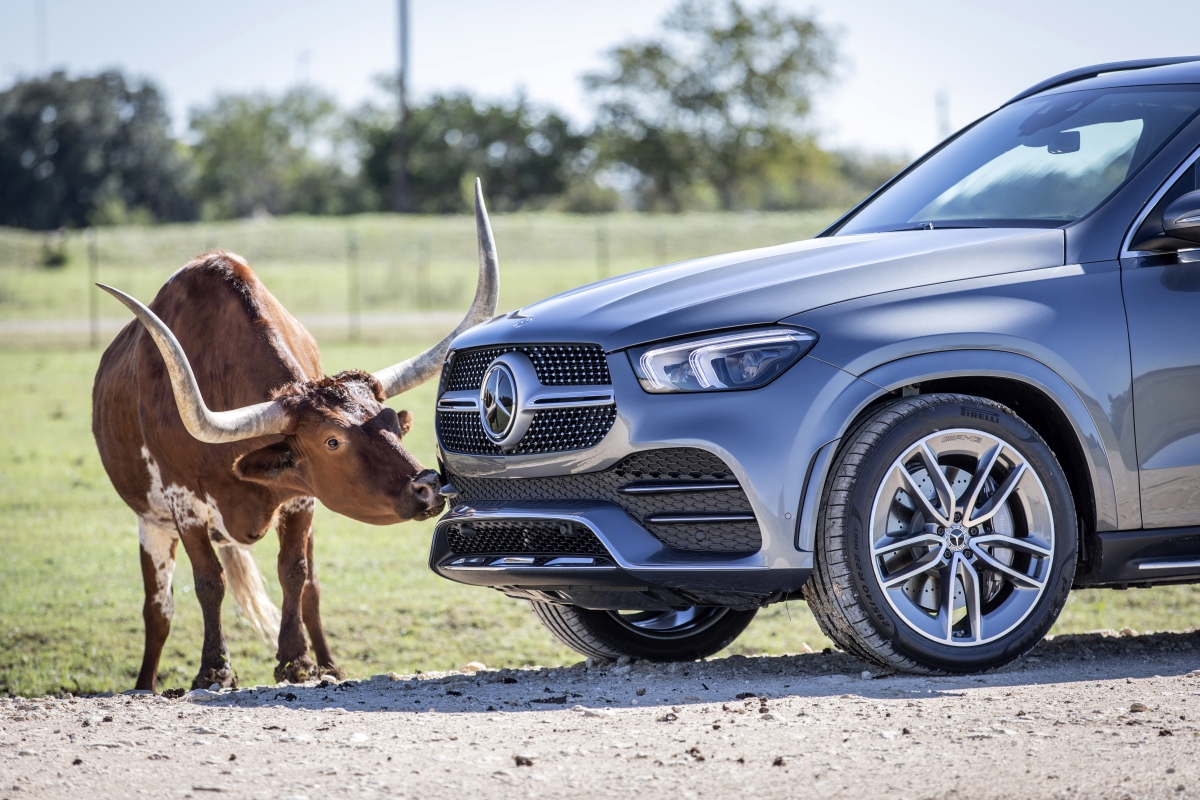 Going up against rivals like the Volvo XC90, Audi’s Q7 and BMW’s X5, the new Mercedes-Benz GLE is arriving this month in Irish showrooms. With a bit of careful jiggery-pokery Mercedes have managed to squeeze more space into the GLE and for the first time it will be available as a 7-seater.
Pros
Cons

This may be the all-new GLE on the inside, but anyone who’d just woken up after a few years sleep would be forgiven for not really spotting the difference on the outside. In fact, since Mercedes changed the name of their M-Class to GLE back in 2016, and even before then, the external design of these SUVs hasn’t overgone what you’d call drastic changes. The biggest difference between this and previous generation GLE / M-Class vehicles is the addition of LED headlights. 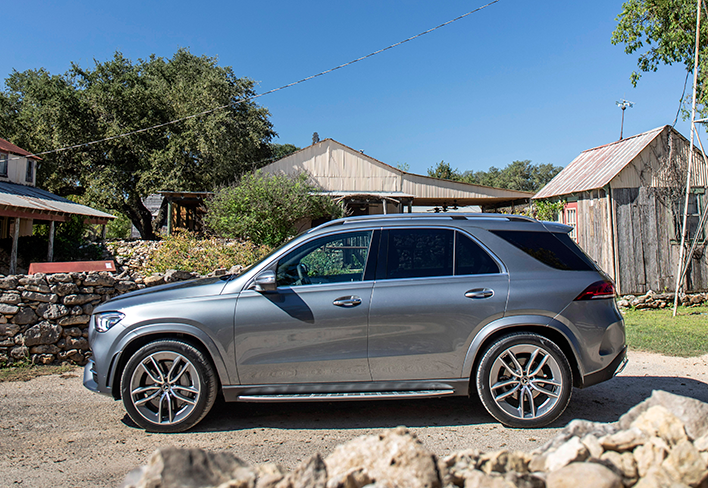 A change to the body that may not be immediately noticeable to the eye actually has pretty good ramifications for the interior. The overall dimensions of this GLE have been shifted fairly subtly from its predecessor. An additional 80mm in the wheelbase, about 10cm extra length overall, and just 12mm extra width are all it took to allow for the inclusion of an extra row of seats. Whether you opt for the 7 or the 5 seater version, you will notice that there’s significantly more space than previous GLEs. Even choosing the panoramic sunroof option doesn’t lose you much headroom in the middle row of seats.

If you do opt for the 7-seater version you and your passengers will have very decent leg and head room, in the front two rows at least. The back row really isn’t designed for your average adult to sit in but is absolutely fine for kids. If you’re looking for a vehicle to to cocoon a young family, this will suit you well. Regardless of which version you choose, neither driver nor middle row passengers will have any complaints about their ride.

The dashboard shows a departure from the GLE’s rivals.  Two touchscreens mounted above each other and a through-wheel digital dash seem to be becoming de rigeur with the competition. Mercedes have gone down a different route for this build. We have two side by side, 12-inch touchscreens that seamlessly blend into one elongated panel. You can control the infotainment system in a number of ways including a trackpad in the centre console, steering-wheel bound buttons and relatively intuitive voice and gesture commands (as well as the touchscreen itself of course).

It has to be said, the look and feel of this interior beats out its class rivals. This is probably the most stylish interior of the new crop of family SUVs. Everything feels luxurious and sturdy and the build quality is excellent. 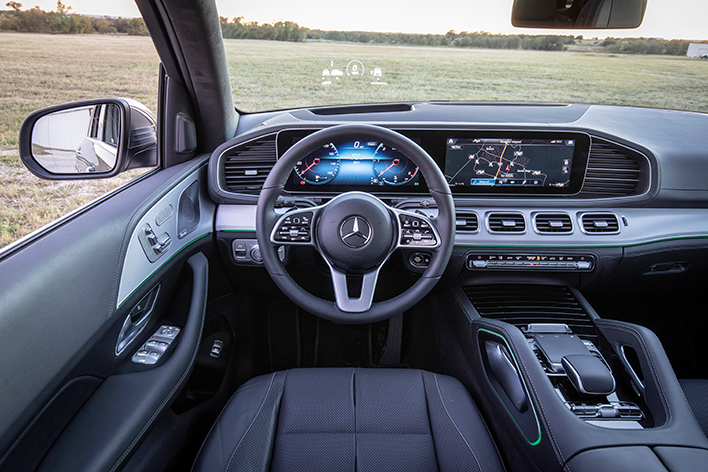 The Irish market has a few choices with regards to engine. Mercedes are offering one petrol choice, the 3 litre GLE450 4MATIC. And a choice of three diesels, the 2 litre 300D and the 2.9 litre 350D and 400D. 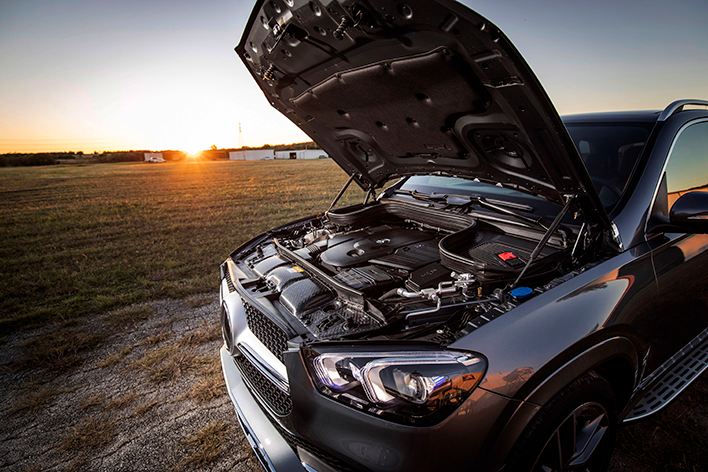 This being an SUV, the emissions-based road tax you pay falls into the higher brackets under the Irish system.  There’s a bit of fluctuation between trim choices and engine type. But, suffice it to say you’ll be looking at at least band E for the petrol engine (€750) and at least band D for the diesel (€570).

Choosing one of the diesel models will get you better fuel efficiency. The 400 D (diesel) and the 450 (petrol) give you roughly equivalent acceleration levels and not far off the same top speed, but you’ll be looking at about 7 extra miles to every gallon of fuel with the diesel option. 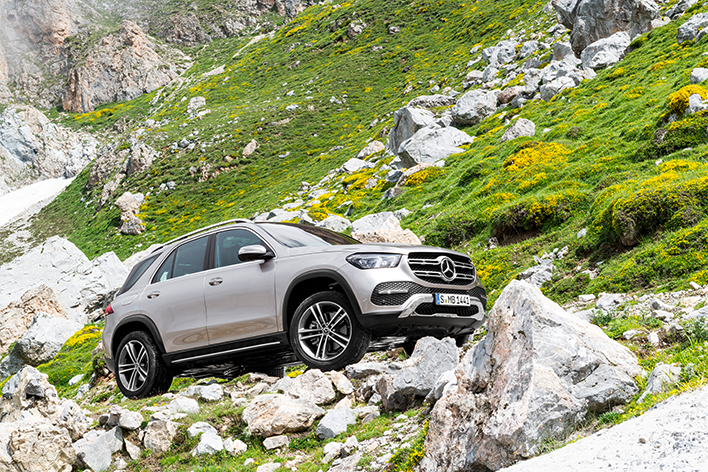 Mercedes have a pretty good record when it comes to the safety of their vehicles. This new breed of GLE hasn’t been rated by Euro NCAP yet, but previous generations of this car have been scoring their maximum of 5 stars since they first rated them under the overall rating system in 2012. 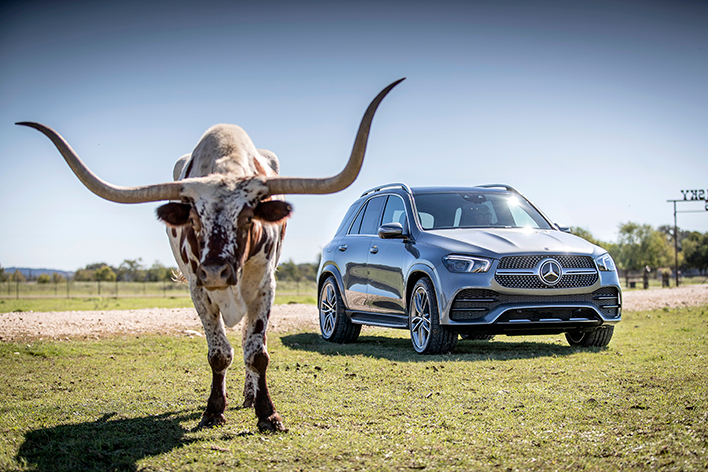 Mercedes haven't changed much on the outside of the all-new GLE, some would argue they didn't need to. The inside is the best Mercedes SUV yet though. The drive is comfortable, the technology useful.