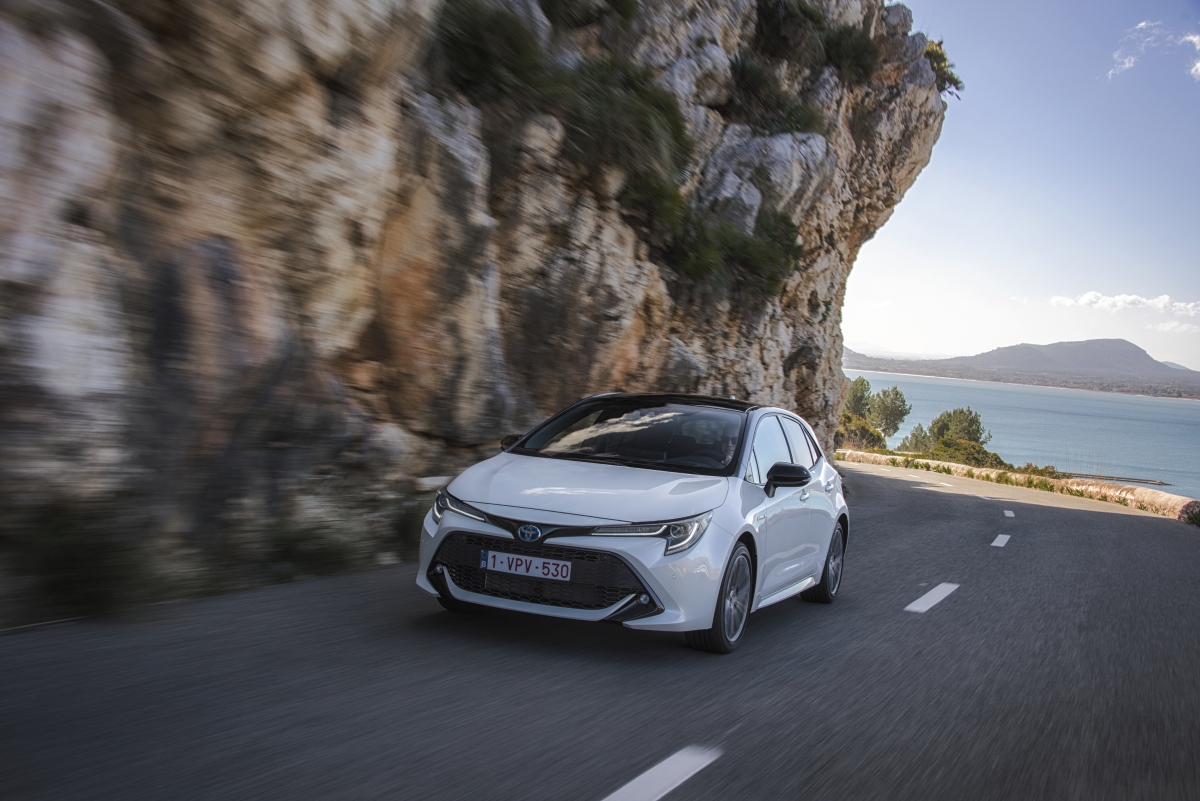 The best-selling car in the world took a slight sabbatical from our shores when Toyota decided to end the long running Corrolla moniker and brought us the Auris instead. The japanese firm have reversed that decision and the new Corrolla hatchback could very well become a welcome, common sight on Irish roads once again.

This new generation of hatchbacks has been rebuilt from the ground up working from the designs of the Auris. But it is based on an entirely new platform. So we have new suspension, new steering a complete facelift and, importantly a new hybrid engine.
Pros
Cons

Older Corrollas and the Auris were never going to win any beauty pageants. They weren’t going to win any ugly pageants either. They were reliable, a bit conservative, a bit dull. Toyota have been injecting some new life into their designs recently and the new Corrolla has been given quite the facelift from the Auris. There are lines where before we had featureless panels. There are angles where before we had mediocrity. Its nose is sharp and angular with pretty distinctive features. The new look Corrolla is actually quite fun. 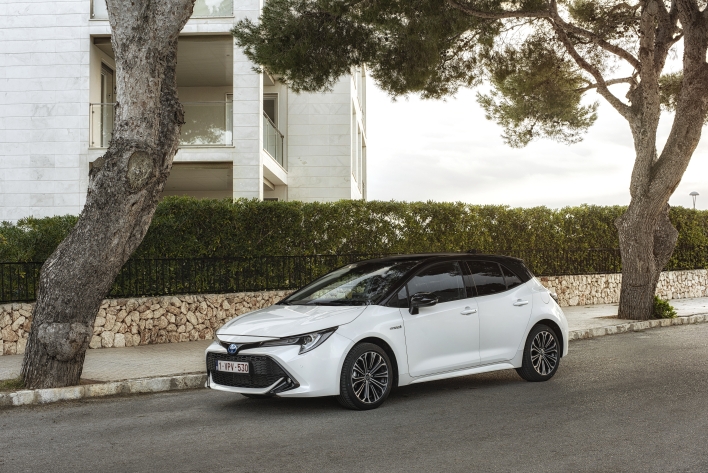 Just as the exterior has been given a complete overhaul, inside the new Corrolla hatchback you’ll notice a lot of updates and invention. Gone is the fairly drab interior of the Auris. We now have some quite stylish flair. Everything is solidly built, as you’d expect from Toyota. The steering wheel is reassuringly solid, though it could be a bit more adjustable. Nothing feels lavish but everything feels and looks like it’s high quality and dependable.

Through the steering wheel you’ll find an uncomplicated driver’s display. 2 analogue dials sit either side of a digital screen that comes with a few options. Controlling this digital readout with buttons set into the steering wheel you can choose to display trip information, phone status etc. It’s not quite as configurable as the display you’d find in a Golf, but it does the job it’s intended to without being overly fussy.

The infotainment system’s screen is set higher on the dash than you’ll find in a lot of the Corrolla’s competition. This makes it very easy to reach and see from the driver’s position. The screen is 8 inches from corner to corner and helpfully, has physical shortcut buttons to the sides so you won’t have to navigate through countless menus for the most frequently used options.

As far as space is concerned, The driver’s seat is fully adjustable giving a great driving position no matter your height. There’s plenty of headroom in the front and rear seats. A good range of storage compartments, though none of them are cavernous. When it comes to boot space, the Corrolla isn’t the worst. Nor is it the best. 361 litres with the rear seats up places the Corrolla somewhere in the middle of its class. More space than a Ford Focus, less than a VW Golf. That is, unless you opt for the Luna Sport.

If you opt for the Luna Sport edition of the Corrolla you’ll have a choice of two hybrid engines. The 2 litre version offers a performance boost but at a cost. The increase in engine size left little room for the battery under the bonnet. So Toyota found room for it in the boot. This means the boot space in the 2 litre Luna Sport is not only smaller than that of it’s rivals in this family hatchback class, but it’s actually less than you’d get in a car in the class beneath it. 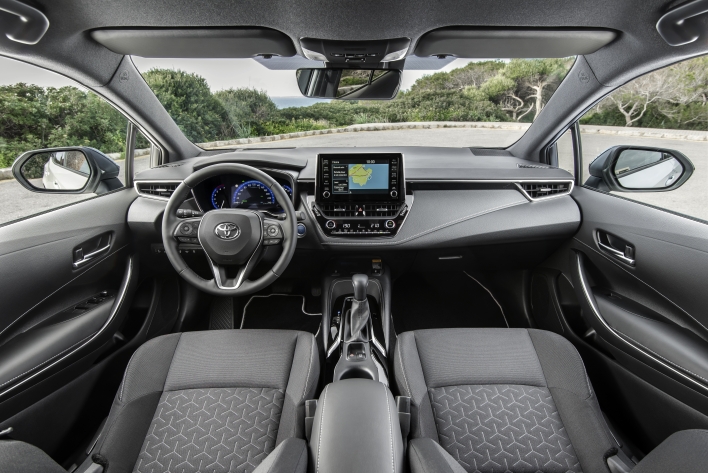 The new Corrolla hatchback is being offered with a choice of three engines. For the petrol-heads out there, we have a 1.2 litre turbo petrol engine. For the more futuristically inclined, there are two hybrid options, a 1.8 litre and a 2.0 litre choice.

Toyota and the dealerships are in agreement that the most popular choice will, most likely, be the 1.8 litre hybrid engine. Some predictions are saying that between 80 – 90% of all Corrolla hatchback sales will be with this option.  The main benefit of this choice is, of course, the increase in fuel-efficiency and so lower running costs. But there are some differences in performance that come hand-in-hand with opting for different engines.

Top speed is 180 km/h with the hybrid engines, a slightly more spritely 200 km/h is the limit if you choose the 1.2 litre turbo petrol engine. The 1.2 litre turbo engine models have a 0-100 km/h time of 9.3 seconds. The Luna Sport model can reach 100 km/h in just shy of 8 seconds with the 2 litre hybrid engine installed. Choosing the 1.8 litre hybrid, alongside the extra boot-space, slows this to 10.9 seconds.

Regardless of engine choice, you won’t be setting any fastest lap times in the new Corrolla, but it is quite a fun little car to drive. 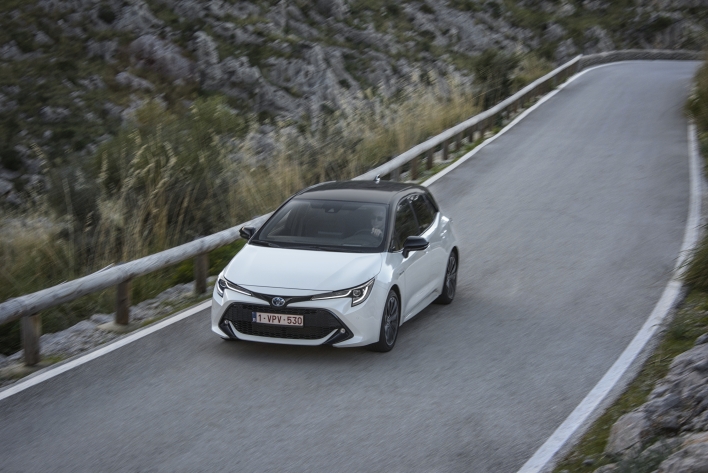 Toyota know how to build reliable cars. It shouldn’t come as a surprise that drivers have long had faith in them. There’s a reason the Corrolla is the best selling car in the world. It’s not a shock to see older generation Corrollas still driving about our roads in the faithful hands of their first owners. 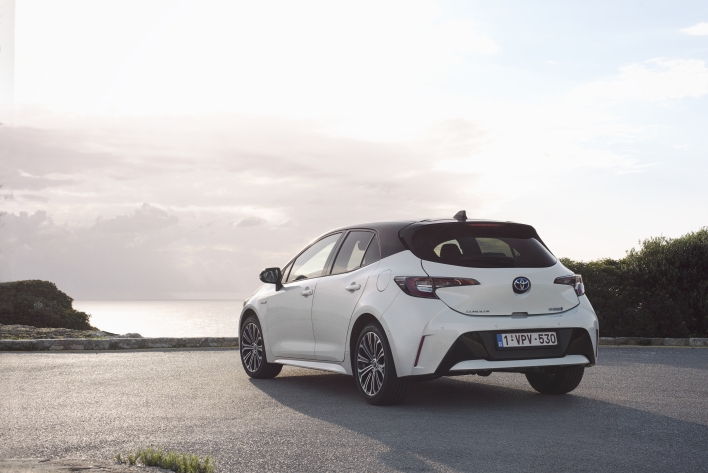 Obviously your choice of engine will have a big impact on the running costs of the new Corrolla. The 1.2 litre petrol engine will never manage the efficiency of its hybrid siblings. That being said you should still be able to expect fairly decent fuel efficiency from it. The published stats show this engine covering between 36 and 45 miles per gallon of petrol. The 1.8 hybrid can almost double that though. The WLTP figures show that with the 1.8 litre hybrid you can achieve almost 75 mpg with the right conditions and driving style. Your normal driver will be expecting slightly less frugal results than that though. In typical Irish conditions you’ll be looking at something closer to 60 mpg in town.

The new Corrolla hasn’t made it into the hands of EuroNCAP’s crash testers just yet so we don’t have the final safety rating from them. But, the previous generation of Corrolla and Auris both received the full 5 star safety rating and these new Corrollas have a host of safety features fitted as standard.  Across the range you’ll find LED headlights are a standard. Features such as Automatic emergency braking, lane keeping assistance, traffic sign recognition, and automatic high-beam assist are all standard across the range as well. 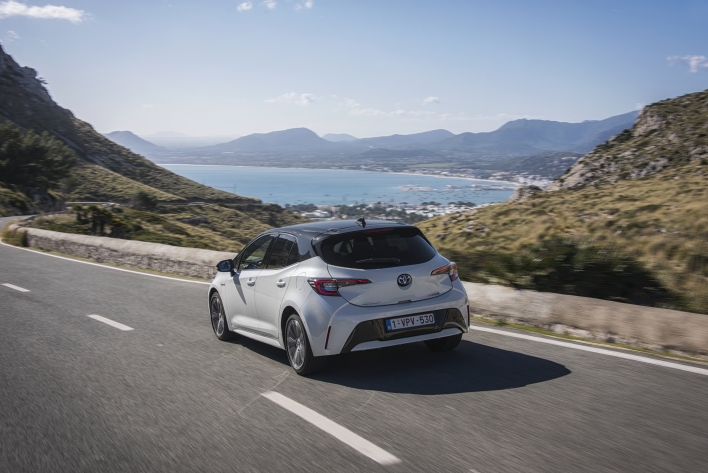 Toyota have completely re-worked the less than stellar Auris and brought back a much-loved, familiar sounding car to Irish roads. The name might be familiar, but everything else about the new Corrolla hatchback, from its jaunty good looks and satisfyingly styled interior to its fuel-efficient hybrid engine choice, is refreshingly new.