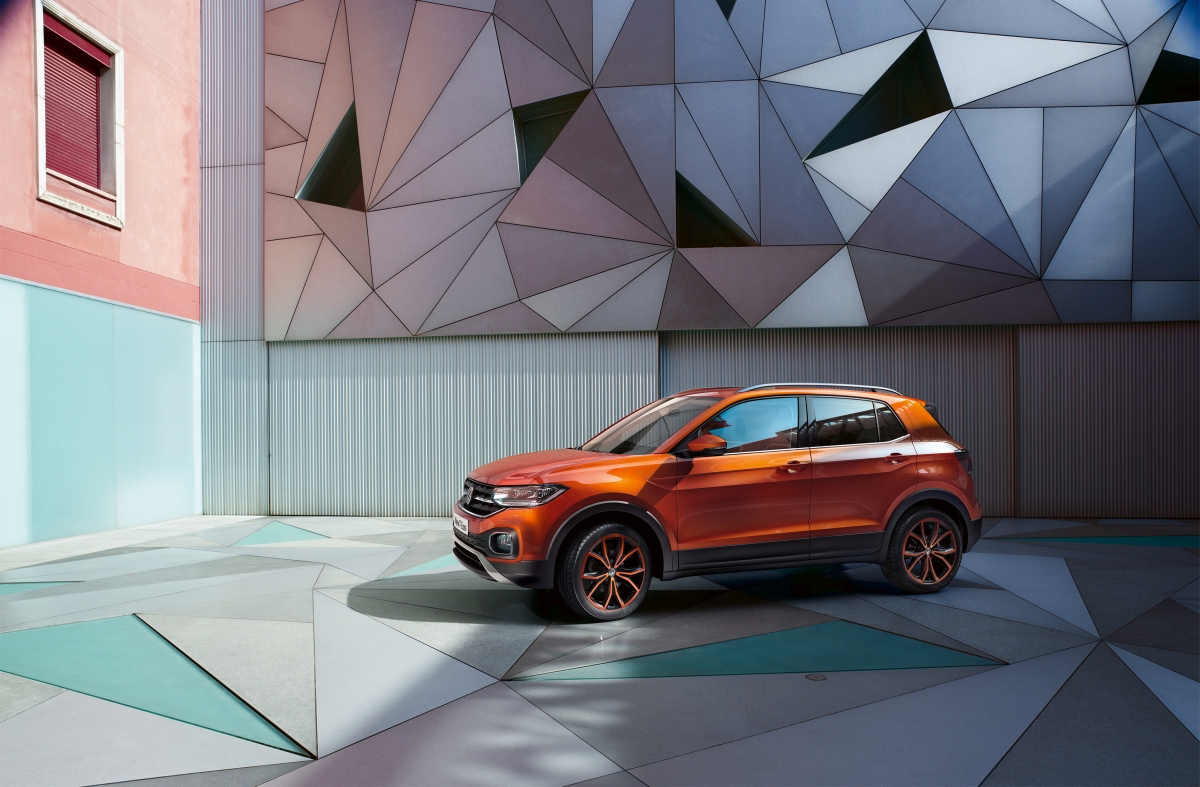 Back in 2016, VW teased a concept car at the Geneva Motor Show called the T-Cross Breeze. This was to take the best from the worlds of the SUV and the convertible. The idea for a convertible SUV obviously didn’t make it all the way to production, but the name “T-Cross” and the idea of basing an SUV on the core components of a Polo now have.

Volkswagen are predicting that the market for small SUVs could more than double in the next decade and so they’re putting a lot of investment into this sector. From April, they will be offering 4 distinct SUVs to their Irish customers (5 if you count the seven-seater Tiguan Allspace), The T-Cross will be joining the Touareg, Tiguan and T-Roc.
Pros
Cons

The new T-Cross is the smallest SUV in VW’s stable and it draws heavily from the family gene pool. The most striking family resemblance is to the Polo. In fact, you could be forgiven for thinking that someone had done some ingenious modding on their smaller car to raise the ride height and added a body kit for a more aggressive look. Resemblance aside though, it does stand out from its stable mates, wrap-around tail-lights make the rear quite distinctive and the aforementioned body kit goes a long way to making this small SUV look bigger than it is. In reality the T-Cross is roughly the same size as a Peugeot 2008. 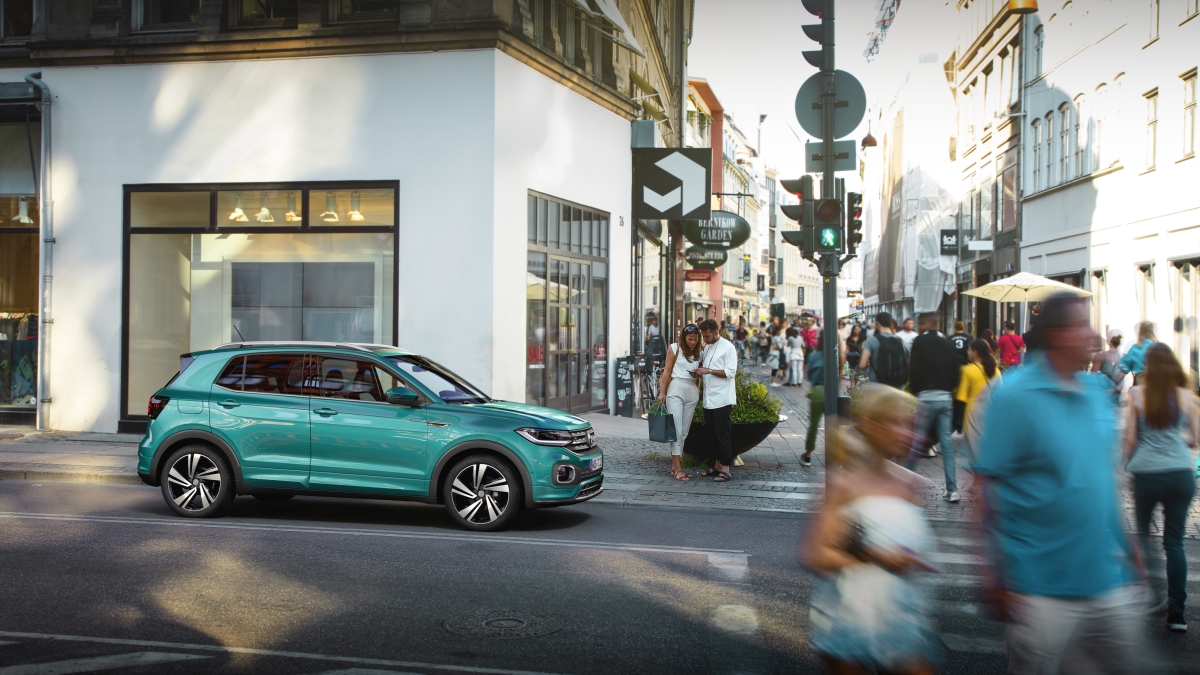 Raising the roofline and lengthening the wheelbase gives a surprising amount of extra room inside the T-Cross. With the rear seats pushed forward, the boot space amounts to over 450 litres. That’s more than you’d get in the larger Golf. If you fold the rear seats down the cargo space more than doubles. And, if you’re feeling particularly anti-social and need to carry something up to 2.4 metres in length, you can fold down the front passenger seat as well.

There’s decent headroom and legroom in the rear, provided the you haven’t pushed the rear seats forward. USB ports are an option in the rear, as is the inductive / wireless charging option for your phone. Apple CarPlay and Android Auto connectivity comes as standard though. These hook up to a good-sized central colour screen that’s integrated with the dash. You can also opt for a digital screen behind the wheel rather than the traditional instrument cluster.

All in all, the interior is of pretty good quality. It is quite similar to the interior of the Polo, but that’s not a major surprise. 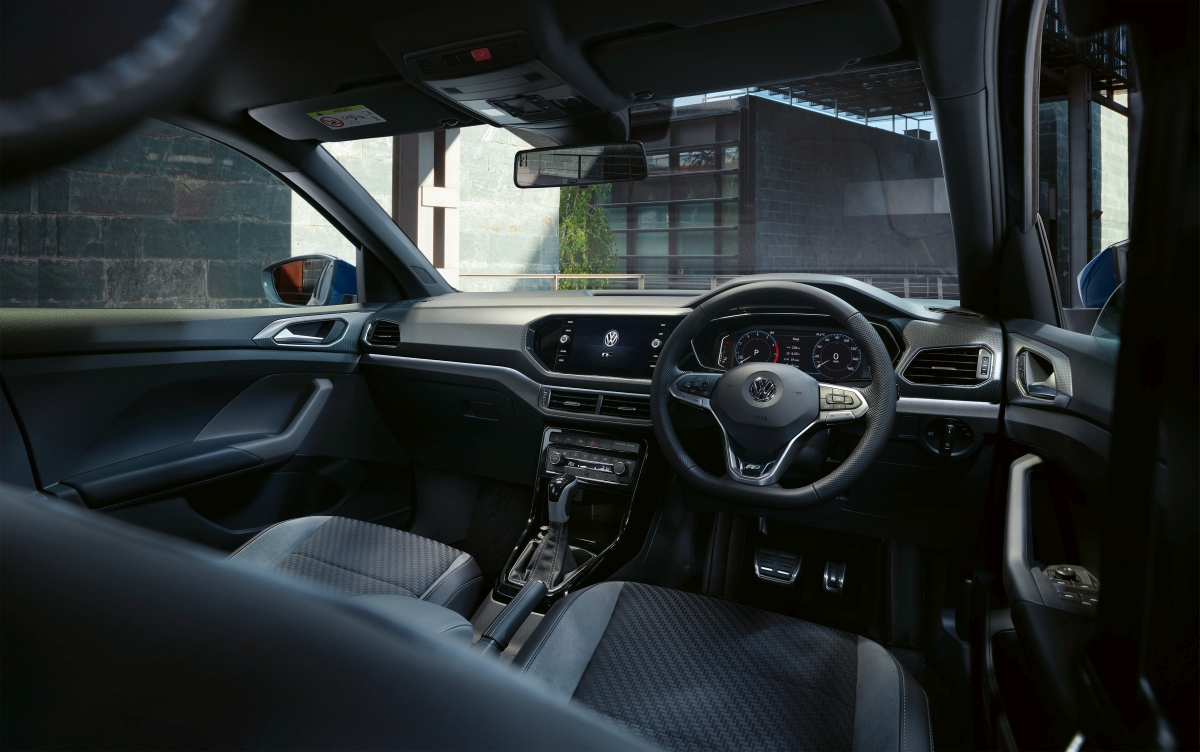 There will be three engines on offer from launch or soon after. The smallest of these will be a 1 litre, 95bhp petrol engine, it will come partnered up to a 5-speed manual transmission.  Next, we will see a slightly more powerful 115bhp version of the same engine that will have a choice of a 6-speed manual or a seven-speed automatic. Finally, VW are planning to offer a 1.6 litre diesel engine that produces 115bhp.

The T-Cross is most at home in the city, it has great visibility and is quite versatile. But you shouldn’t expect to do much overtaking on country lanes, the 1 litre engine just wont let you. 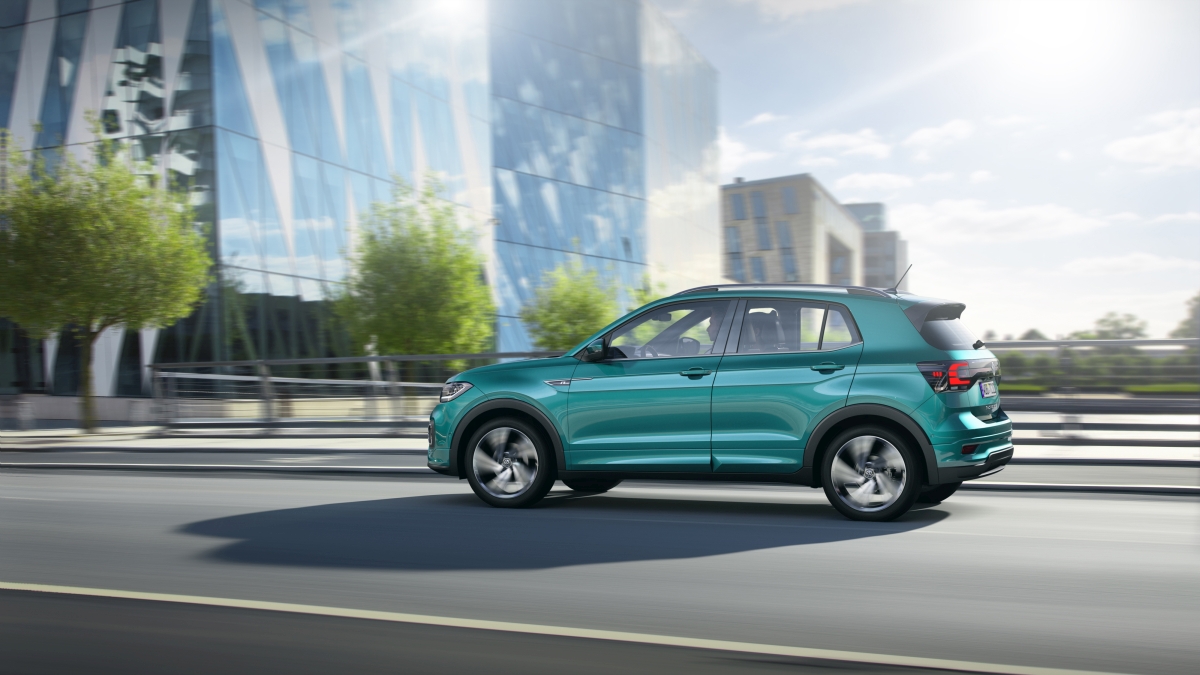 You’re looking at fairly decent fuel efficiency with advertised consumption of between 44.8 and 48.7 mpg for the petrol engines. As usual, trim choice, options and driving style will affect this. 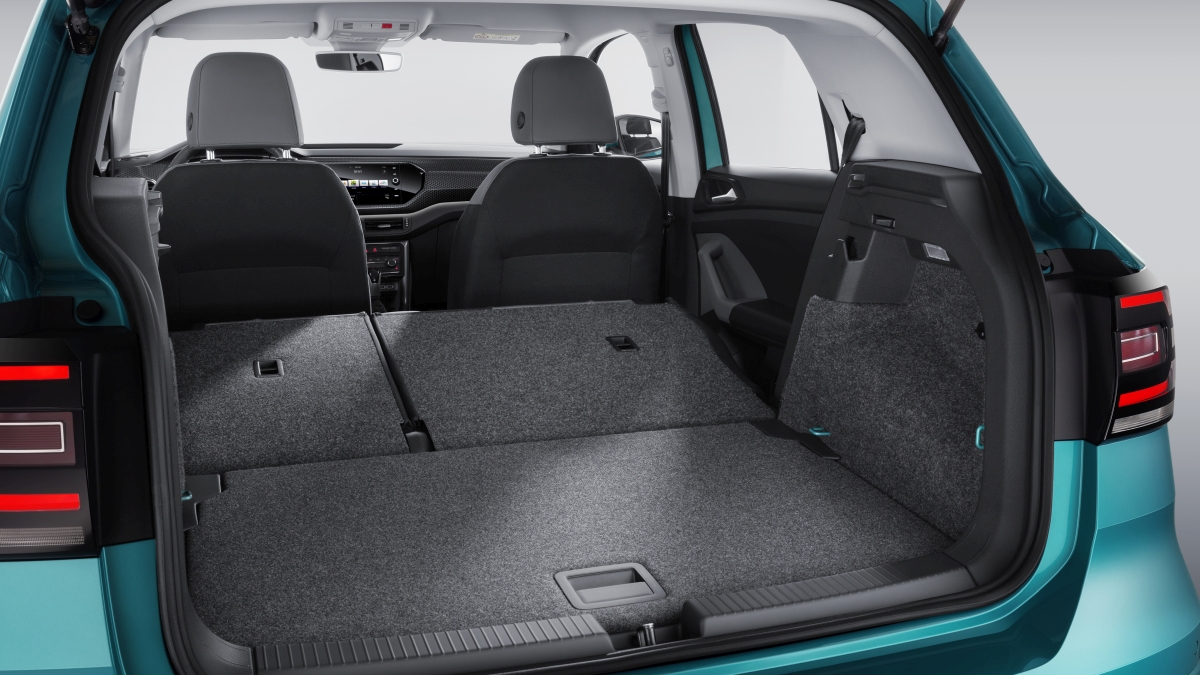 With the T-Cross only being released this year, Euro NCAP haven’t had a chance to give it a going over yet. We anticipate good scores when they do get to it though. VW consistently score highly in safety tests for their other models and they are including a swathe of safety and assistive features with the T-Cross. Added to that the fact that the T-Cross is based on the chassis from the Polo, in fact it’s being constructed alongside the Polo at VW’s Spanish production facility, and we’re not concerned that there’ll be any issues with safety. 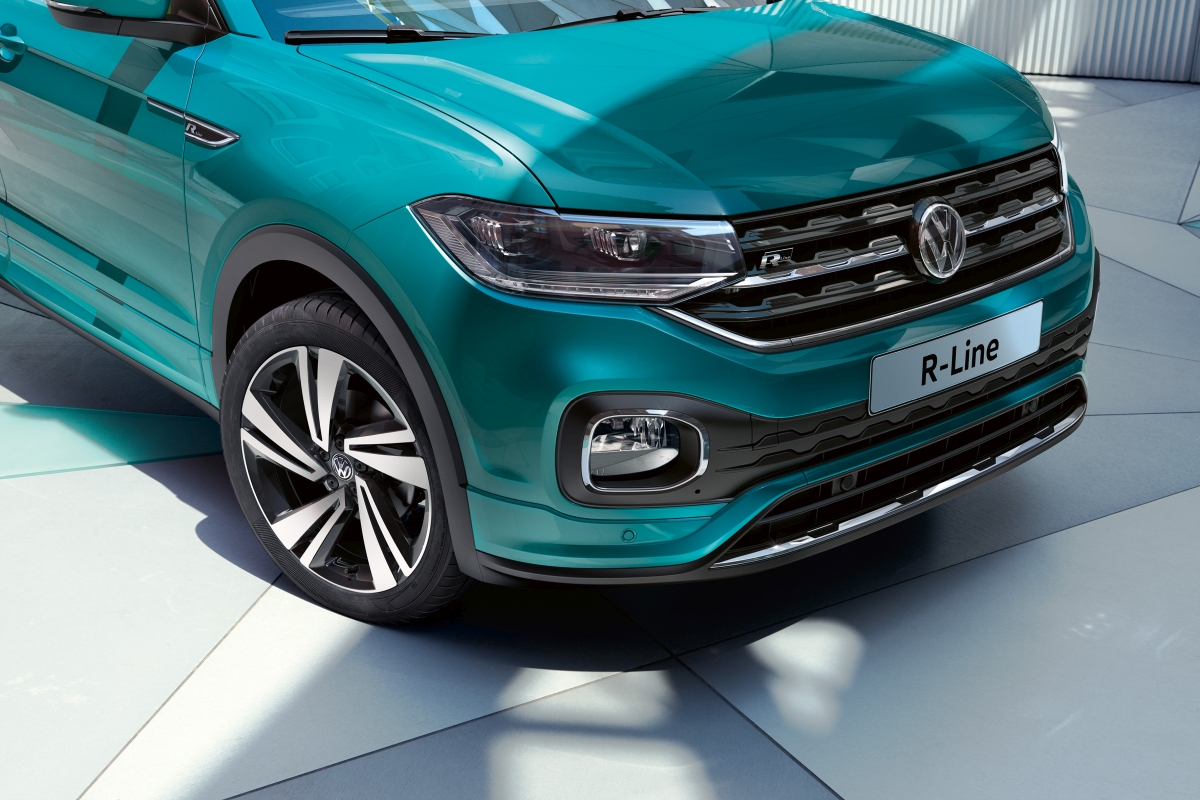 If you're looking for an interesting, smaller SUV the new T-Cross could well be for you. We know the idea of a small SUV doesn't appeal to everyone, and neither will the T-Cross. But if you're one of the ones that VW is aiming to speak to with their design choices, this stylish city car will definitely appeal.