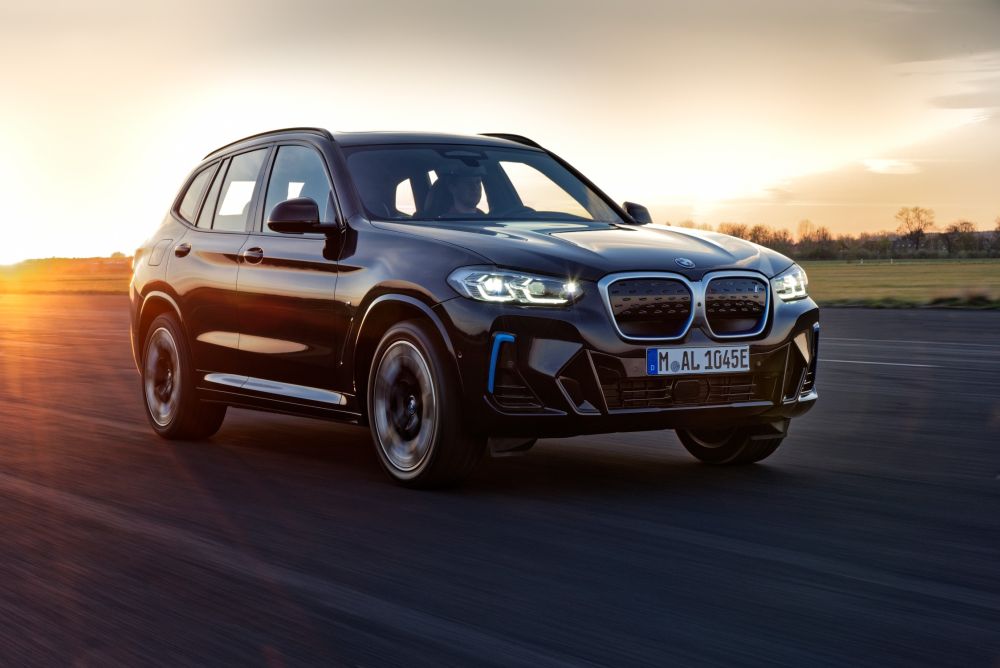 When BMW introduced the i3 in 2013, it looked like the German car maker was ahead of the curve when it came to the development of electric vehicles. Compact, distinctive and futuristic it was hoped the i3 could be the shape of future transportation for many years to come. However, since then the market has shifted. Larger SUV and crossover electrics have become the vogue and BMW’s electric vehicle development seemed to flounder. In more recent years there has been more change the Bavarian company’s electric offering has bounced back with the introduction of the BMW iX, i4 and iX3.

From a practicality and potential popularity stand point, it is the iX3 that carries the biggest weight under the BMW electric banner. It is not a bespoke electric vehicle, but an EV version of the popular X3. Sitting alongside petrol, diesel and hybrid versions of the model, it is competing in a busy sector with the likes of the  Audi e-tron, Ford Mustang Mach-e and Mercedes-Benz EQC, as well as models from the likes of Tesla and Volvo.

The car comes with a €77,000 price tag so might be just an aspiration to many. However, if you have the potential to stretch to this, does the iX3 represent a sound investment?
Pros
Cons

Unlike some of the BMW i models, the iX3 does not make a bold, “look at me, I am electric statement”. To the naked eye it looks much like the other i3 models, although it sits slightly lower to the ground. You have to look hard to spot distinguishing i features, such as the blue electric detailing and redesigned grille.

The car looks like an even more solid BMW SUV, if that is possible and the appearance is more subtle elegance, rather than stand-out or game changing. If you like the BMW styling then the i3 will appeal, however, to other potential buyers the exterior may be a little conservative and ever so slightly dated. 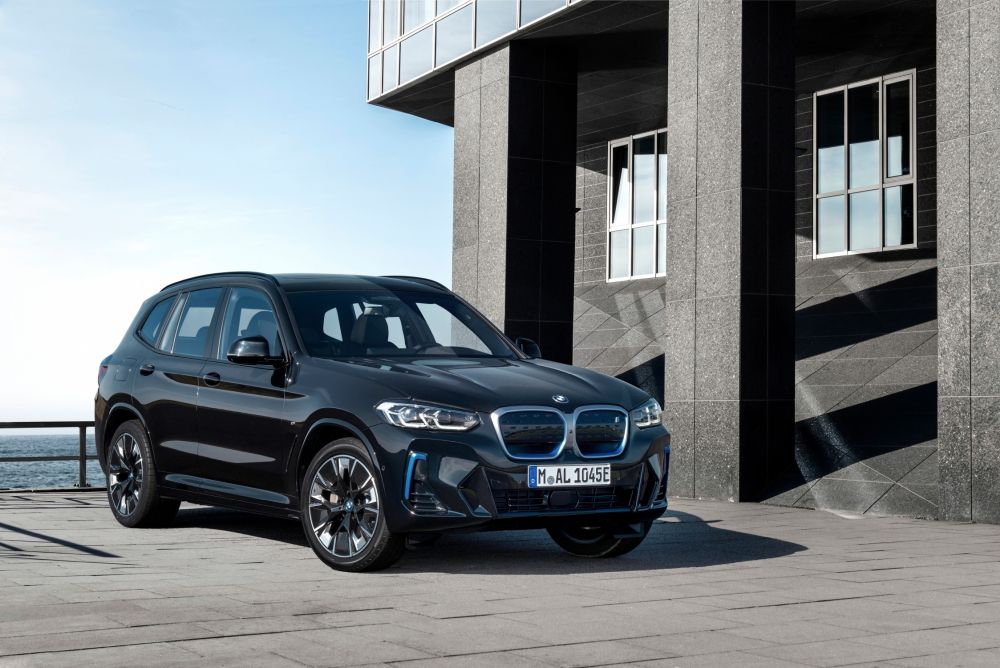 As you would expect from a premium BMW model, everything inside the iX3 feels just right. The build quality is excellent and the interior mirrors the other i3 models but for some more blue detailing.

The infotainment system and driver’s display are crisp and clear, with easy to follow EV specific information in the driver’s eye line.  There are the normal touch screen controls and the system can be operated via the iDrive controller, or through voice recognition. There is straightforward connectivity and a nod to the more traditional motorists with knobs and buttons for certain climate and driving controls.

The fully adjustable electric sports seats provide a commanding view of the road and space in the rear is good for three adults, although strangely the car retains the transmission tunnel despite its battery power. A panoramic sun roof gives the interior an even greater feeling of bright space.

Boot space is a generous at 510 litres, with access through a neat electric tailgate. This can be increased to a massive 1510 litres with the back seats down. This makes the iX3 both practical and very comfortable. 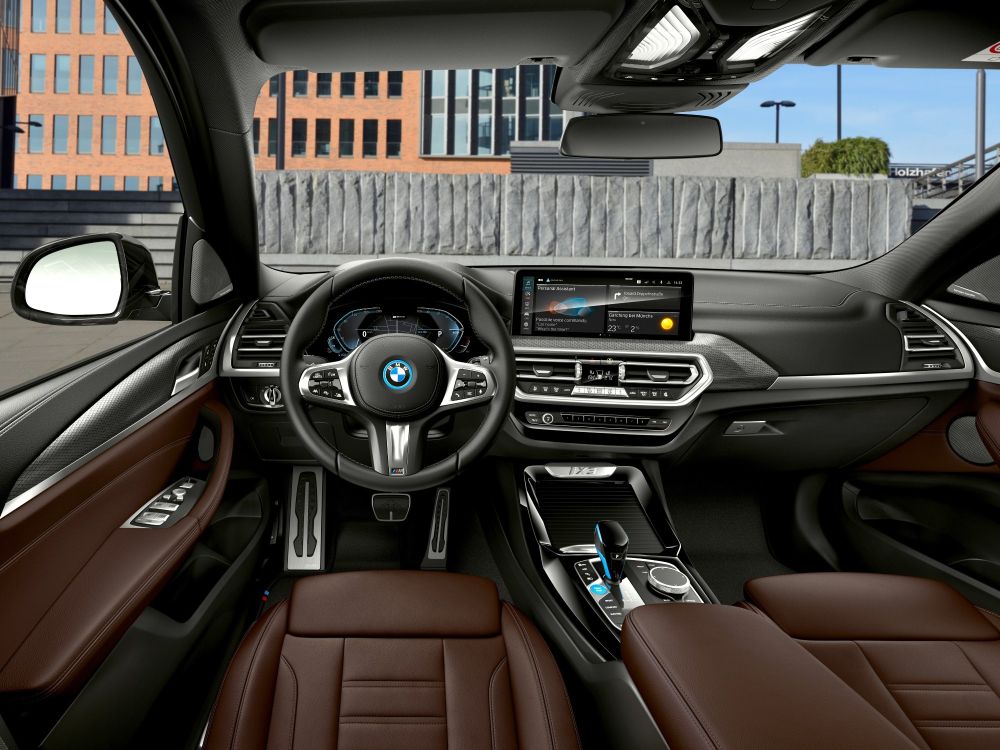 Not so many years ago a 0-100km/h in 6.8 seconds would have been a headline grabber for a car of this type, but with today’s high torque electric motors it is good, but not exceptional. The truth is that the acceleration of the iX3 goes well beyond what normal drivers really need, as does the power and top speed. The 80 kWh battery, allows the single electric motor to produce 286 hp, however it should be noted that this is delivered to the rear wheels only, with no 4x4 option available.

The officially claimed range of the iX3 on a full charge is 460 kilometres, which is pretty good. Real world driving is likely to limit this to the mid 300 kms, but this still makes the iX3 more practical than some of its rivals on longer journeys.

Charging is standard for models of this type with 0-80% range in just 34 minutes at a fast charging station and an overnight 7.5 hour full change from a home wall box. 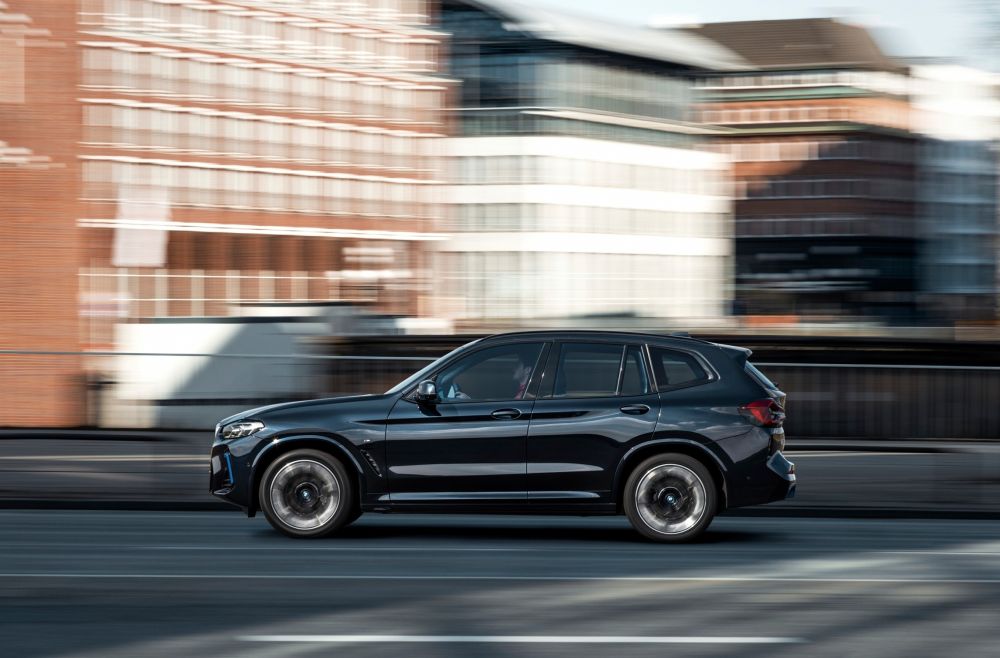 BMW’s reputation as a builder of solid cars is not actually well reflected in customer satisfaction surveys for the petrol and diesel X3 model, which came 61st out of 75 in a recent UK ownership survey. However, that said, the electric version, with less complex engine management systems, has less potential for issues. It is also based on what is now a fifth generation BMW electric drive system, so the EV technology is well refined. A three year warranty and 100,000 km battery warranty provides further piece of mind. 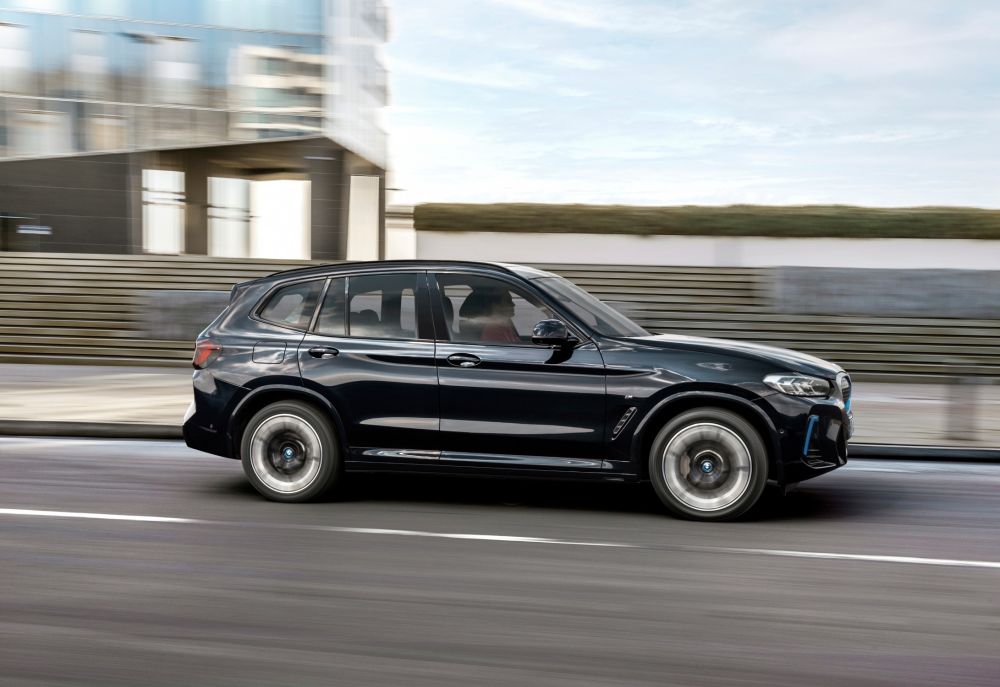 At well over €100 to fill a tank with petrol now, the electric alternative is becoming more attractive. This means for many buyers, with shorter journeys and mainly town driving, the iX3 will make good economic sense. For anyone doing long haul motorway driving on a regular basis, an old style engine might suit better, especially in terms of practicality and probably won’t be too far off the mark on actual energy cost.

Low tax also makes the electric model appealing and BMW has more service centres than many of its competitors. It is also worth keeping in mind that when it comes to resale value, the BMW badge still carries a lot of weight. 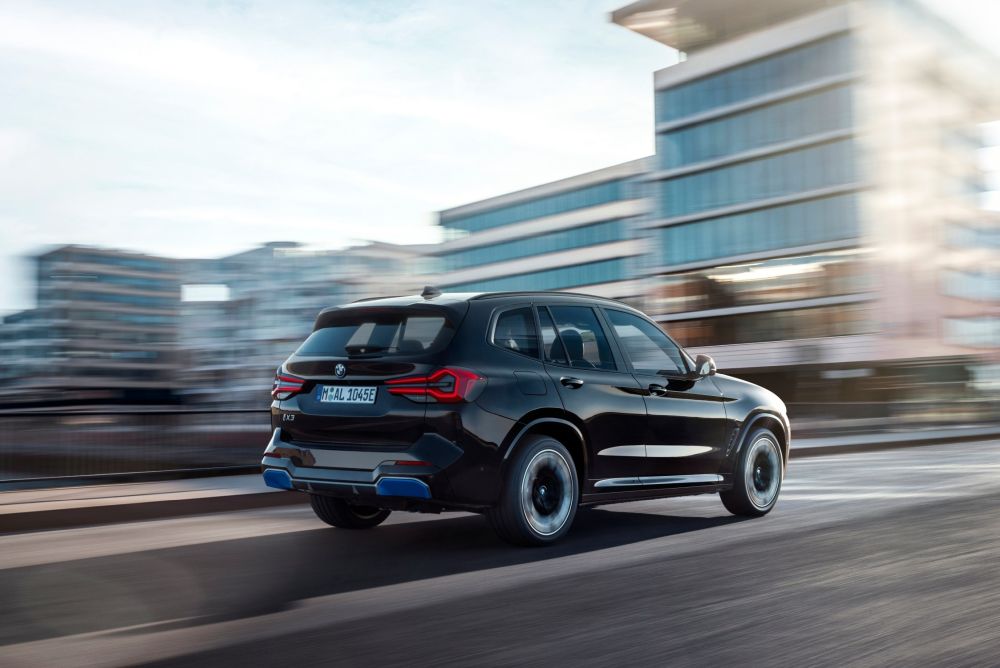 Good advertising slogans stick and despite dropping the term in the 2000’s, BMWs are still cast as the “Ultimate Driving Machines.” While other car makers may have caught up, the latest range of BMW models have managed to keep their reputation as driver’s cars and despite being a heavy electric model the iX3 is no different.

The iX3 drive is smooth and refined and for an electric vehicle you get precise steering and just the right amount of road feedback. Sport driving mode in particular adds to the engagement, with heavier steering and stiffer suspension.

Good weight distribution and a low centre of gravity mean the car feels very assured even in high speed corners, while adaptive suspension works away behind the scene to provide a great level of comfort and grip. It might not be up there with an M Series model for excitement, but the iX3 certainly handles well enough to justify its BMW badge. 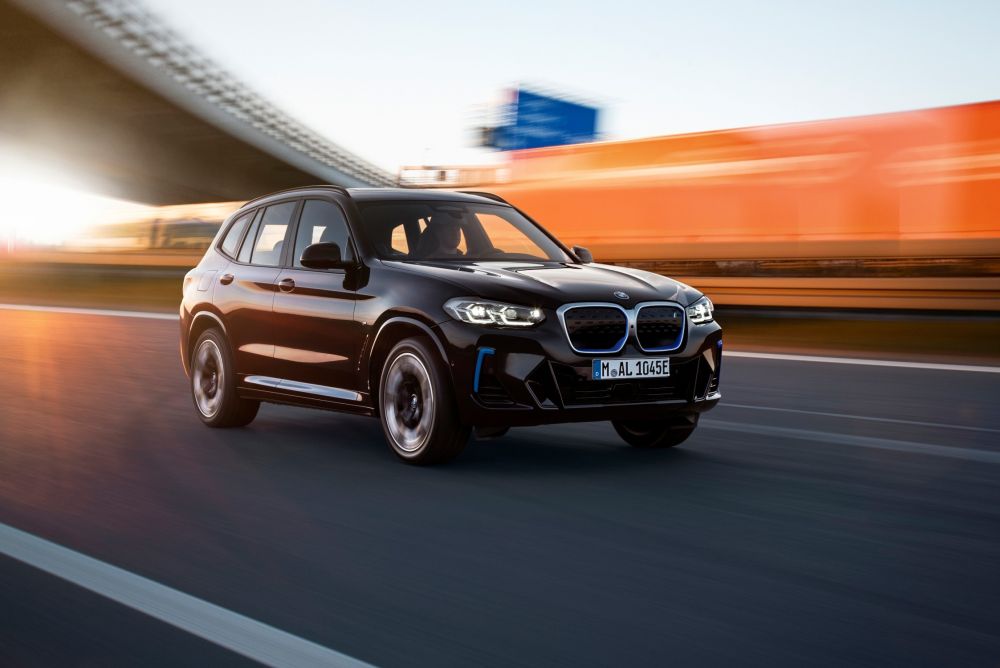 Last year the Euro NCAP safety testing organisation confirmed that the 5 star rating given to the petrol and diesel X3 in 2017 could also be applied to the heavier iX3. This included a 93% occupant protection score. At the time the X3 scored fairly poorly for safety assistance technology and BMW has worked hard to address this in the iX3 model.

The car has a system called Driving Assistance Professional as standard. This includes an array of advanced driver assistance systems such as; steering assistance, lane control assistance, emergency braking and side collision protection. There is also a very god rear view camera and active park assistance to avoid those annoying and potentially expensive parking tips. 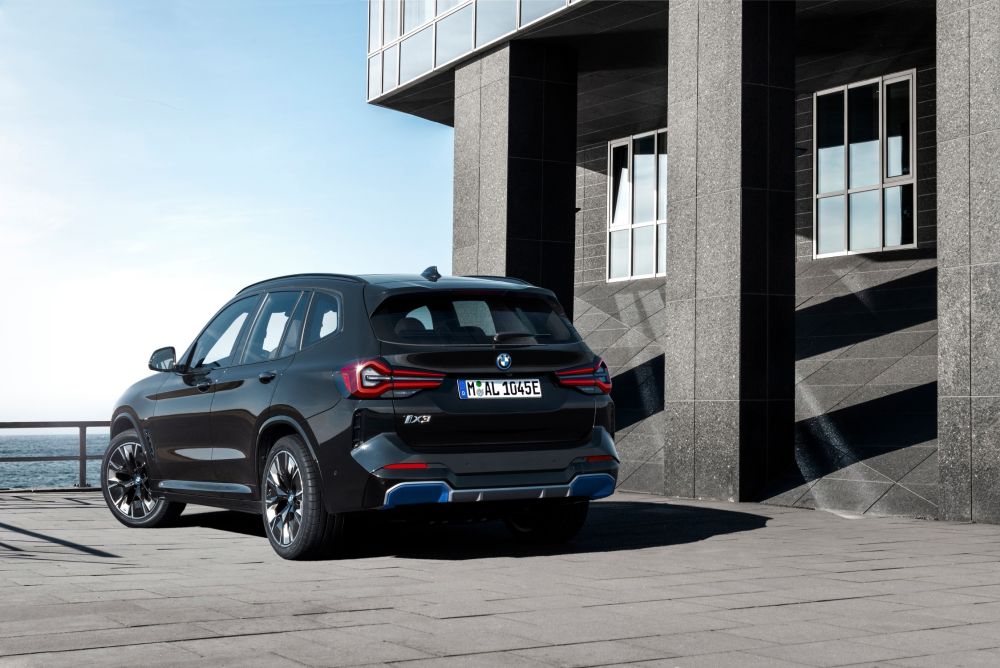 Regardless of whether you are taking your first tentative steps into the EV world, or if you are sold on electric, the BMW iX3 is a very good car and is a serious contender in the premium EV SUV category. It is priced on the high side, but it comes with a high level of standard specification and of course BMW quality, even if it does actually originate from a factory in China. The lack of all wheel drive may put a few buyer off, but most iX3s will probably be used in urban settings anyway.

Despite its many qualities, what will probably sway potential drivers are two things. Firstly how big a draw is the BMW name for them and secondly, what do they want to say about their EV selection. For those looking for a stand out EV statement the iX3 is not for them. If however, you wish to make a more subtle point and favour the more conservative styling, then the iX3 could be the perfect partner for your wall box.