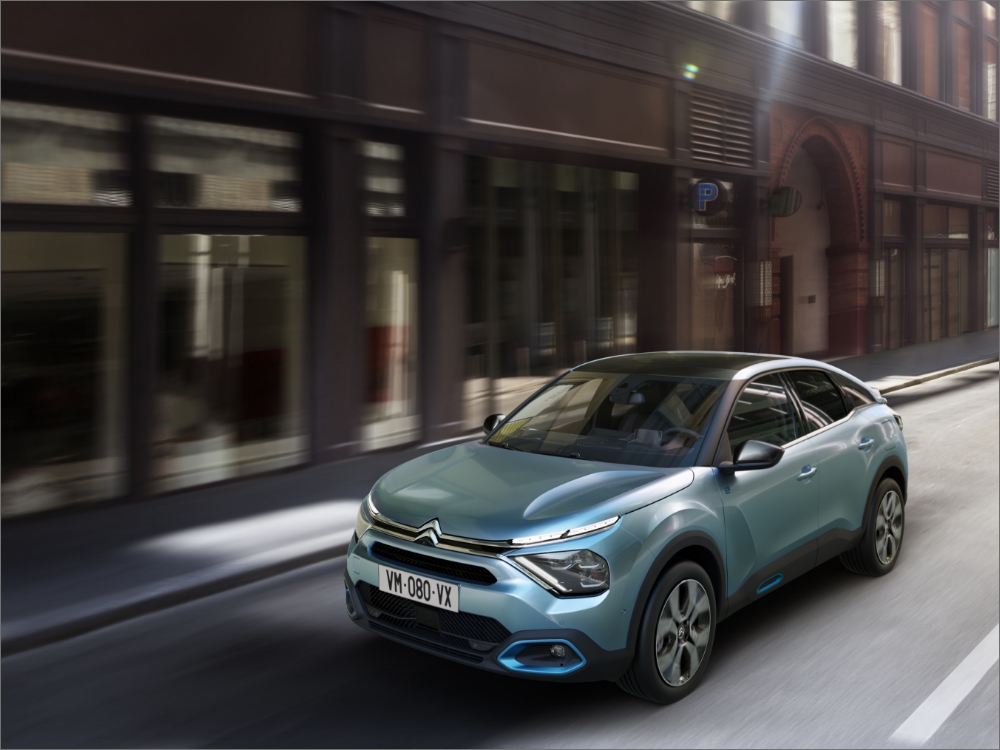 In recent times Irish car buyers have had something of an on-off relationship with the French car maker Citroën. While its vans are hugely popular in the light commercial vehicle sector and its sister company Peugeot has a legion of satisfied drivers on the roads, in 2021 less than a thousand new cars were registered under the Citroën badge in Ireland.

Often seen as somewhat quirky models outside of the mainstream choice, when drivers actually experience driving a Citroën they are usually impressed by the level of style, comfort and performance. The latest car that Citroën is pinning its hopes on to launch it back into the Irish car buyer conscience is the C4 and in particular the all electric ë-C4 version. So, competing in an increasingly crowded family electrical vehicle sector, does the ë-C4 have the style and substance to make it a genuinely good option for potential buyers?

The average Irish motorist has probably never heard of Stellantis. This is the umbrella group organisation that now oversees not only the Citroën and Peugeot brands, but also Opel, Fiat and Alfa. The pooling of design and development resources means that the latest C4 shares a platform with the likes of the Opel Mokka-e, the Peugeot 2008 e and perhaps more surprisingly the Peugeot 208 and Opel Corsa.

Citroën describes the ë-C4, which is also still available in petrol and diesel versions, as a hatchback, although with its elevated ride height it does have a crossover feel about it, without straying too far down the SUV road.

The styling remains typically Citroën, with smooth flowing lines, a sloping roofline, great aerodynamics and distinctive sharp front end, complemented by slim-line LED lights. It all comes together to make an attractive package that is more distinctive then many other of its electric competitors and something that is far more rounded than its chunky Peugeot counterpart. 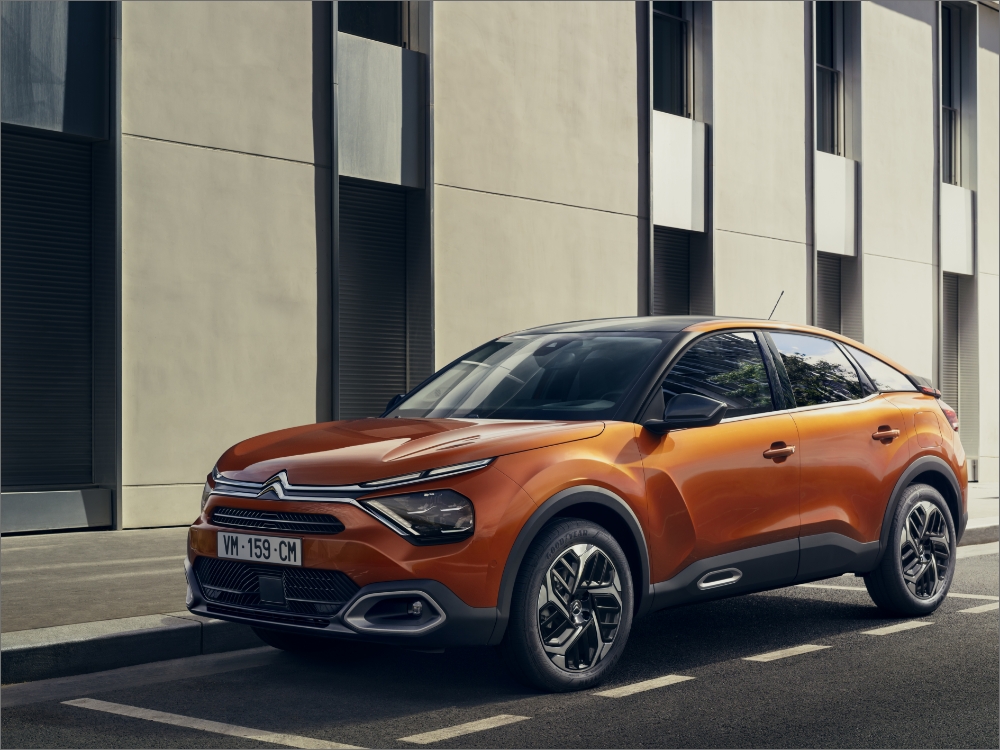 Citroën has always been renowned for impressive interiors and in a world of bland hatchbacks, the previous versions of the C4 have always felt just right on the inside in terms of comfort and touch. The good news is Citroën have continued this tradition with a very comfortable and elegant interior that ticks all the right boxes.

The first thing you will notice are the seats which use Citroën's 'Advanced Comfort' cushions and high quality material making them some of the most comfortable car sets you could ever sit in. There is also an impressive heated leather steering wheel, although the 5.5-inch digital display for the driver behind it is slightly underwhelming. Alongside sits a 10-inch touch screen infotainment system, which does take a bit of getting used to, but once you have cracked it you will find it has all the desired Apple Car Play and Android Auto connectivity. Physical buttons have also been retained for many functions, both on the dash and centre console.

Space in the front is very good and despite the sloping roofline, headroom and space in the rear is pretty impressive. There are plenty of plugs, storage spaces and cup holders and the boot offers an adequate 380 litres with the flexibility of folding rear seats.

All in all, there is much to like about the inside of the ë-C4 with various trim levels also available to add to the excellent base package. 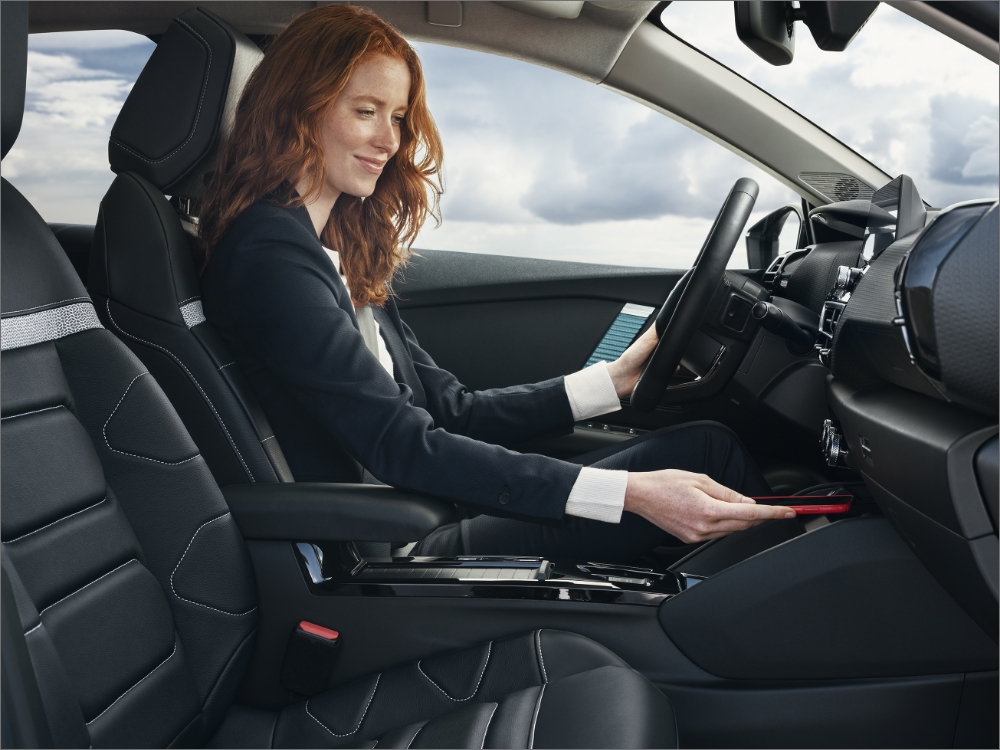 The bar has been set high for even family cars when it comes to driving performance on electric vehicles and while the ë-C4 can hold its own, its performance does not match some of its competitors.

Its acceleration is 0-100 km/h in 9.7 seconds, with a top speed 150 km/h. These figures are adequate for the type of use the model might receive, but lack the element of urban zip that some EVs deliver.

The car has a 134 bhp motor and 50 kWh battery which Citroën say delivers 350km of range. This is a relatively small battery for a car of this type and although this reduces the weight, it does mean that at sustained motorway speed the range may dip a little quicker than is comfortable. Suffice to say that if you do mainly short journeys, or drive mainly in an urban setting, then the ë-C4 range won’t be an issue, but it is not the car to eat up motorway mileage.

On the up side, the smaller battery does make charging relatively quick. For example, at a 100kW public rapid charger it will go to 80% capacity in just 30 minutes. A full charge from a 7.4 kW home box will take 7 and half hours and from an 11 kW three-phase power point 5 hours. 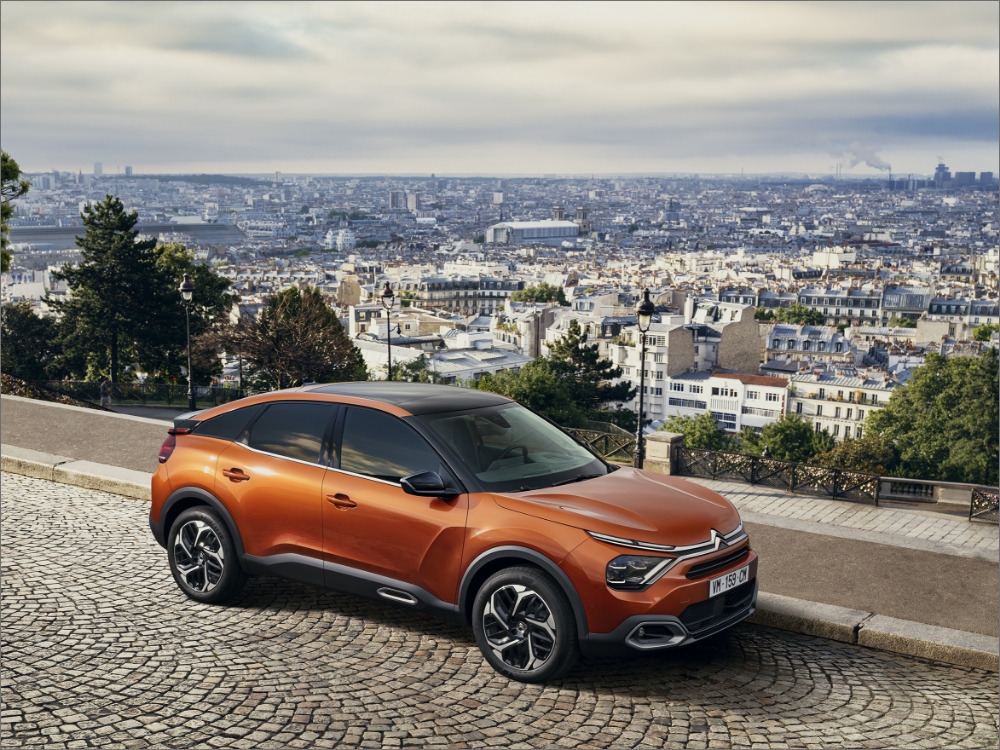 It is early days for ë-C4 and with limited number on the road it is hard to form any clear picture on reliability. In general Citroën has out-performed the likes of Ford, Nissan, Peugeot, Renault and Volkswagen in the customer satisfaction stakes in recent years, so the signs are positive, although the three year warranty lags behind Hyundai, Kia and Renault. 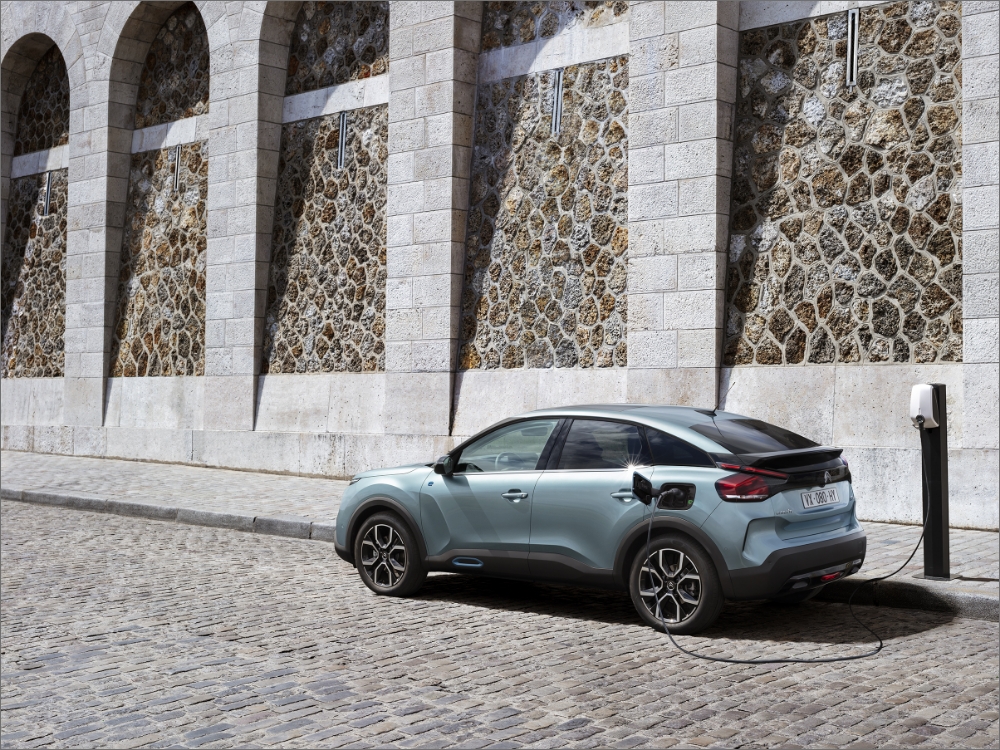 The ë-C4 can provide all the usual benefits of electric driving, which mean low tax and you won’t have to worry about the sharp rise in the cost of petrol or diesel. In pure electric terms other cars can offer further range for the kW, but you would need to create a spreadsheet to track the benefits. It may also be worth looking at the potential resale value of the French model, which is likely to be better than its Korean or Chinese origin counterparts, but not as good as the Volkswagen ID.3 for example. 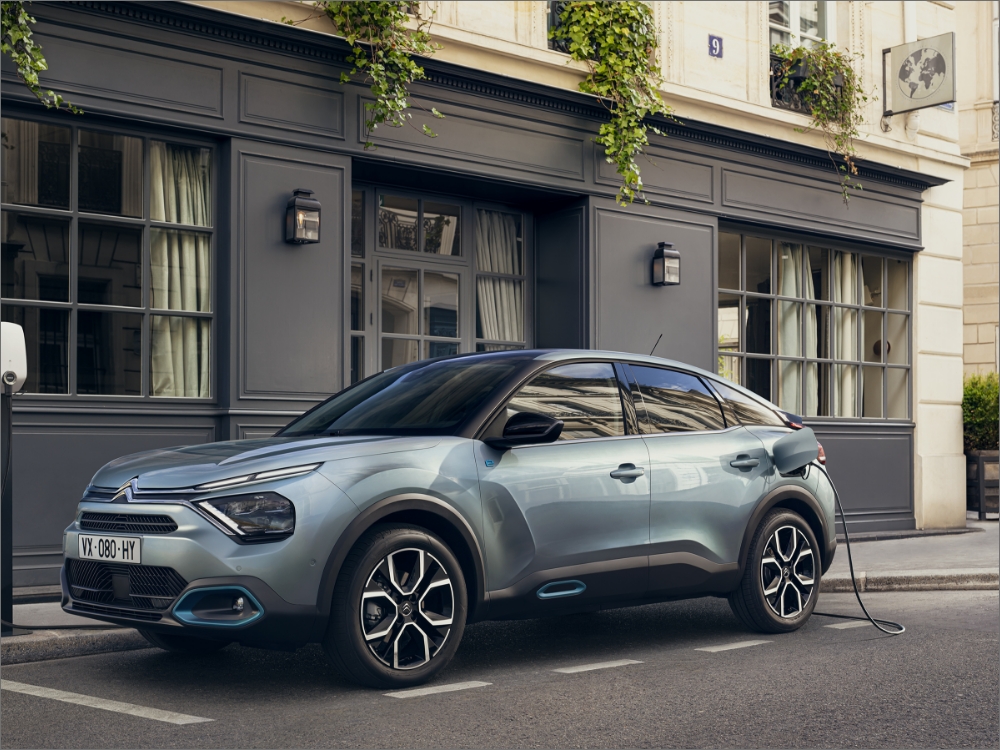 The ë-C4 Citroën has something called a ‘progressive hydraulic cushion’ suspension system, which means it uses a reservoir of hydraulic fluid to effectively iron out pumps in the road. So whilst a similar size, Peugeot, or VW may give you a jolt or two on a bumpy B road, the Citroën provides and a smooth, soft and very comfortable ride, with a difference you will really notice.

This sets the tone for the car. It does not try to be edgy or sporty but instead concentrates on comfort, meaning steering and cornering is more relaxed than exhilarating. It is also very quiet and refined at speed.

That said, the driving in an urban environment is more than perfectly acceptable for a car of this type and while it may not put a big smile on your face, you will arrive at your destination cool and relaxed.

Euro NCAP crash tested the standard C4 in 2021 and gave it a 4 star rating with a 76% mark for adult occupant protection and 83% for child protection. All trim levels come with 'Safety Pack Plus' as standard, providing advanced driver assistance systems. However, to get a top level of safety and driving assistance options you will need to pay for the extra technology. 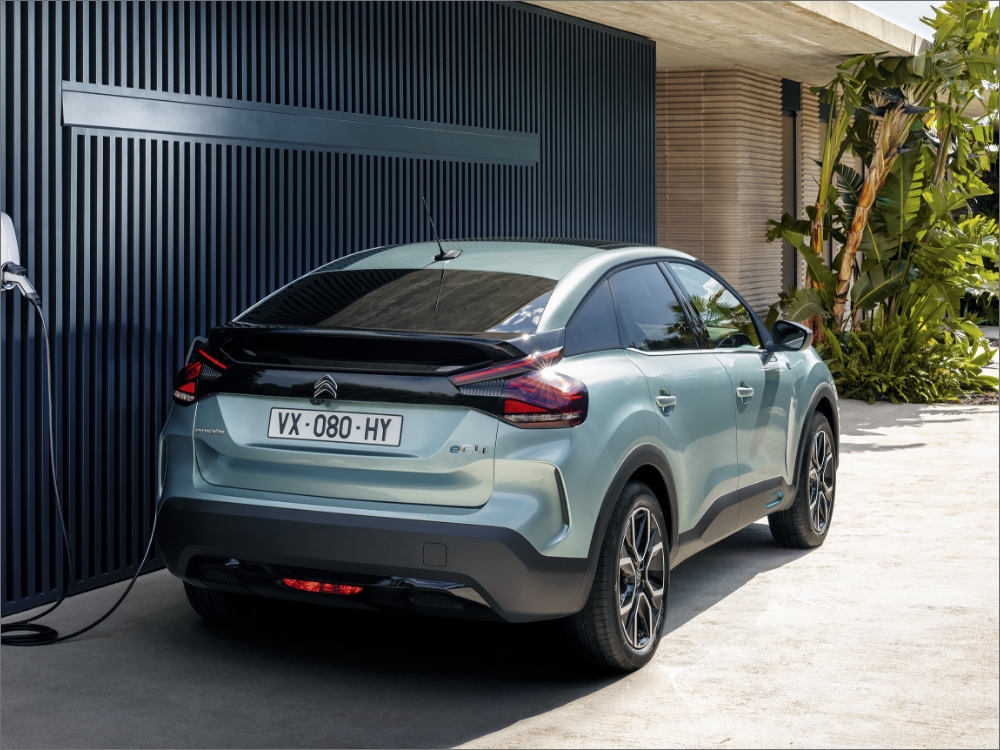 Citroën has never been a conformist car maker and in the ë-C4 it is offering up something different to other family EVs. It is not quite a crossover and not quite a hatchback, meaning that it may have broader appeal than other models. Practicality wise it is certainly well suited to young families and the car looks stylish and a little different to the norm.

Where the ë-C4 really scores well is on comfort, both in terms of ride quality and cabin, providing a more relaxed and refined driving experience. The big question mark is over the small battery and the range. However, as a second car, or one that does not often make loner journeys, this is a car with considerable merit and with a base price under €27,000 not bad value.