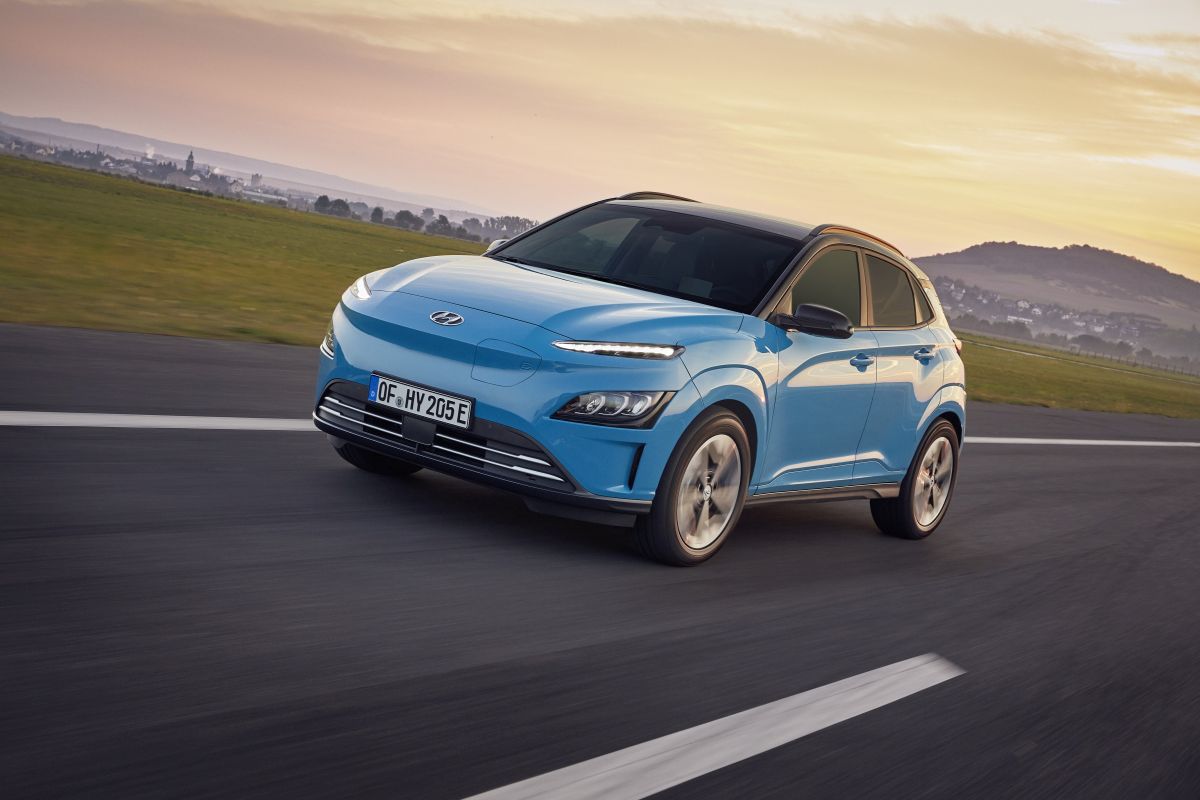 Making the switch to an all-electric vehicle is a big step for many Irish drivers and can be made more complicated if it also involves a change of manufacturer. A new way of buying, a new, and often not too close, service point and a change from your local dealer can be a step too far for many potential buyers. By contrast making the switch to an electric Hyundai Kona can be reassuringly simple for Ireland’s legions of Hyundai fans as well as many other motorists.
Hyundai has been in the top three car brands in terms of new vehicle sales in Ireland since 2017, which was the year that the Kona first appeared. The electric version hit the roads in 2018 and has quickly become a big seller. This seems to indicate that this is a car that can switch more and more motorist on to the electric format, especially those already sold on Hyundai value.
So is the electric Kona still a serious contender in the electric car stakes. Or have new models now surpassed it as more desirable green alternatives?
Pros
Cons

The Kona is a familiar sight on our roads as it has been available in petrol and hybrid for five years. It is classed as a B-segment crossover, rather than a more premium SUV and the only thing that makes the electric version look different is the lack of a front grille. As Hyundai says, the latest, refreshed, version of the Kona does look sleeker and more refined than its previous incarnation. It has the type of stylish, slightly sporty, looks that will appeal to its target audience, however, it is not a car that is going to stand out in a crowd. 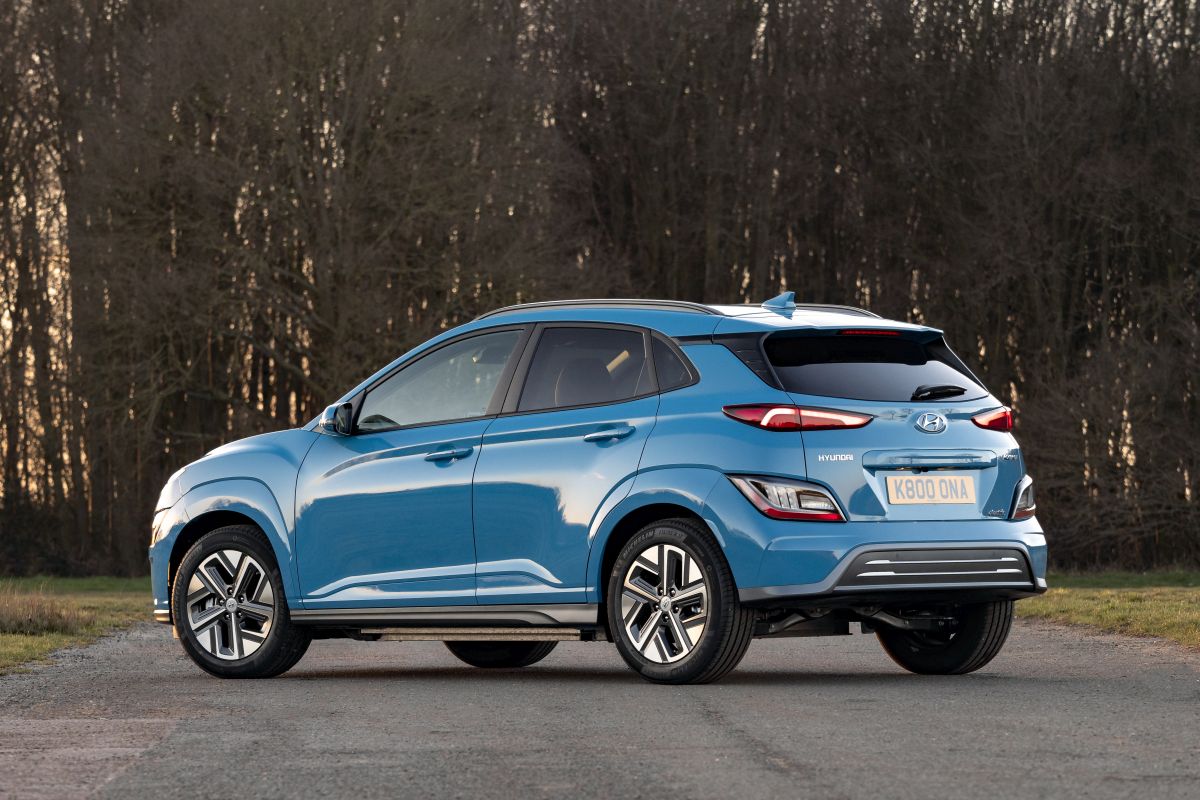 While some of the later model EVs have managed to pull off the trick of a TARDIS like interior appearing bigger on the inside than the outside, the internal space on the Kona electric is a little disappointing. Up front it has reasonable room, but in the back, legroom is a little cramped making it more of a two adult, or three smaller children, set–up. The boot is also a little on the small size, although there is the flexible option of folding rear seats.

The cabin finish is in places a little disappointing, although the technology is good. All models offer a 10.25 inch fully digital cluster display and premium models have a 10.25 inch (8 inch in Executive) touchscreen infotainment system, which is easy to use and provides good connectivity. The latest versions also offer fresh interior colours with one-tone black and two-tone in different cloth-leather options. 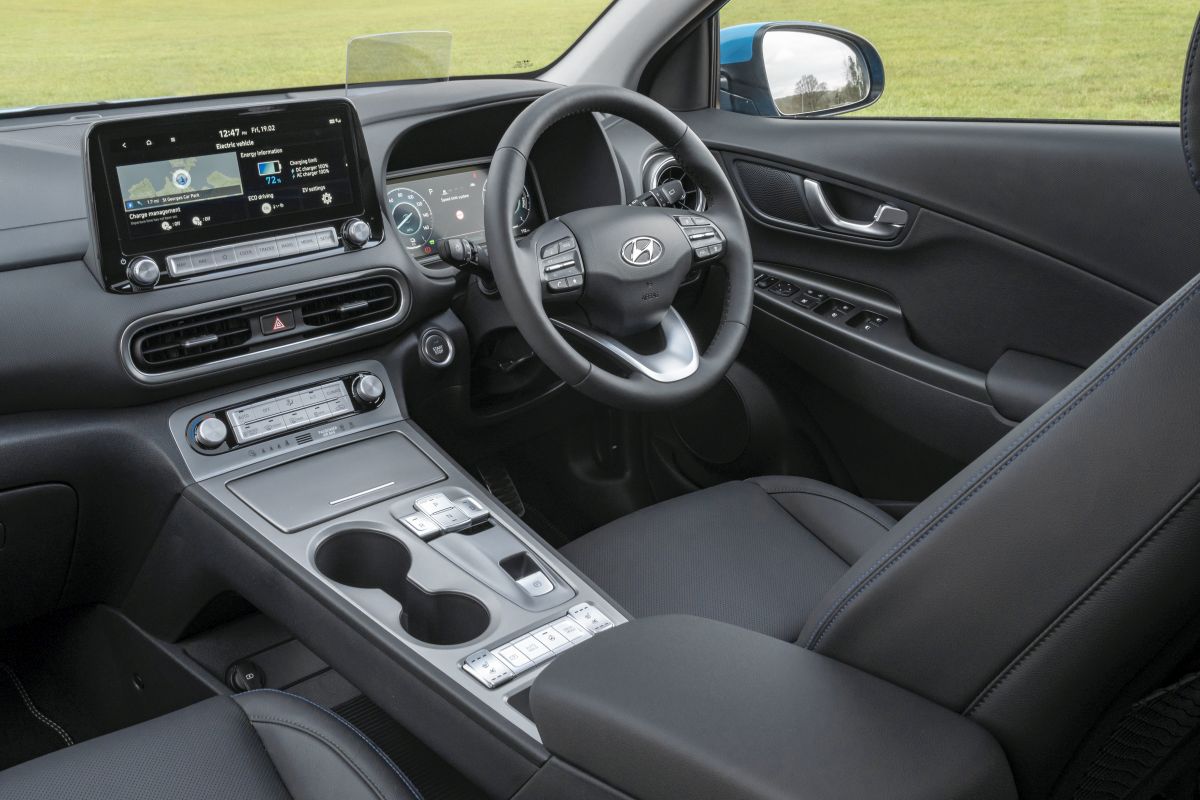 The big plus of the electric Kona, and the biggest reason for its popularity, appears to be its anxiety free range. The 64 kWh version delivers up to 484 km of range on a single charge and practical on the road evidence appears to support these range claims, all be they slightly reduced for real world driving. This means a Cork to Belfast road trip is feasible without charging, until the destination is reached.

Even the 39.2 kWh battery option offers a respectable 305 km range, meaning it could go 13 days without the need to charge on a short daily commute of 22km.
The 64 kWh battery supplies a motor which delivers of 204 bhp (150 kW) taking the Kona from 0 to 100 km/h in only 7.9 seconds and producing a top speed of 167 km/h, satisfyingly sporty, although not spectacular by some EV standards. The 39.2 kWh battery comes with a lower power 136 bhp (100 kW) electric motor.

Charge wise, for the 64 kWh version, if you are lucky enough to have easy access to a 100 kW DC fast-charger, expect to get from 10% to 80 % state of charge in under 50 minutes, or just over an hour at 50 kW station, with this time a little shorter for the smaller 39.2 kWh battery.

A home 7.2 kW single phase wall box will take some 9 hours to charge the larger battery fully and around 7 for the smaller 39.2 kWh unit. 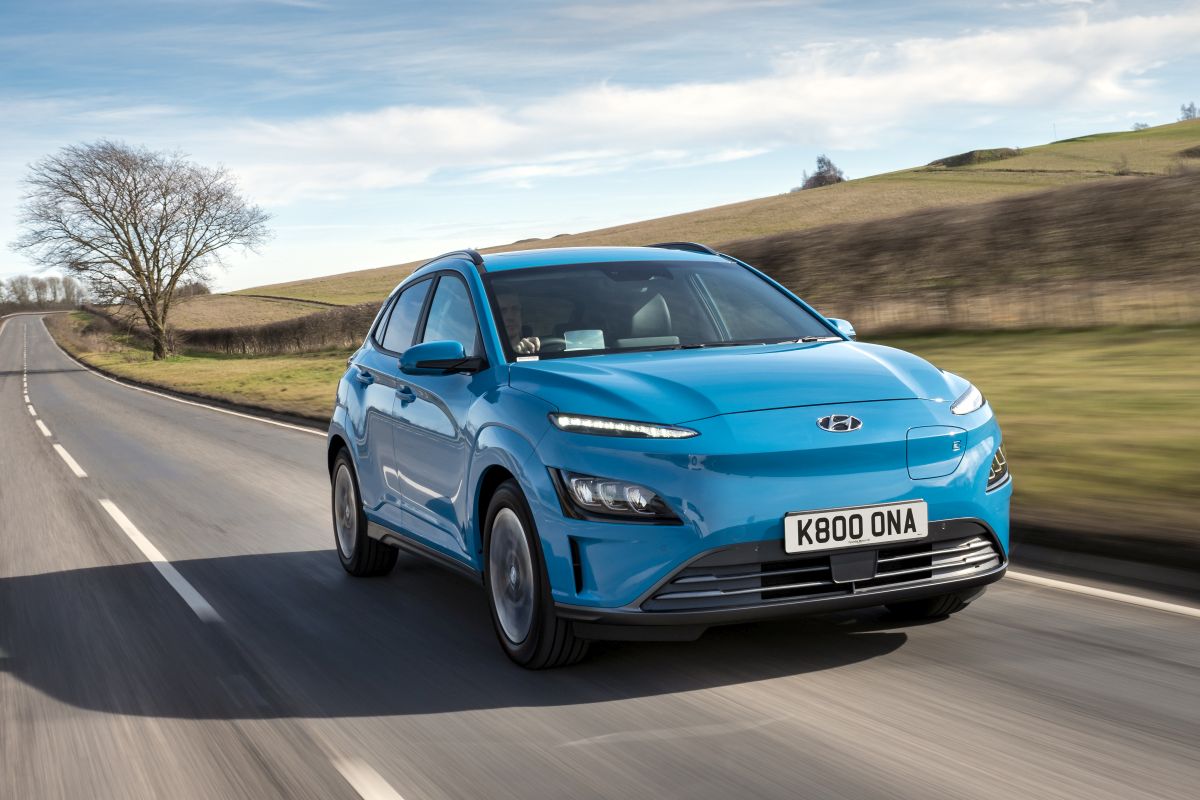 Hyundai’s reputation for good reliability has been building over the years and the petrol version of the Kona appears to have made a big contribution to this. The electric Kona has now been around long enough to make sure any initial teething troubles have now been identified and ironed out, so all-in-all this is a pretty reliable car. Hyundai is happy to reflect this in a 5-Year unlimited mileage warranty and a high voltage battery warranty of 8 years or 160,000 km. There is also 5 years free AA roadside assistance and a free 5 year health check.

Good range and charging make the Kona a very economical vehicle in terms of cents per kilometre, perhaps one of the best on the market. Another consideration with its extended range is that there is less opportunity to spend money, while you charge, so it could substantially cut your annual fancy coffee bill. Also consider that servicing costs will not break the bank and unlike some EV suppliers, there is still a good chance that Hyundai has a dealer within a convenient driving distance, no matter where you are in the country. 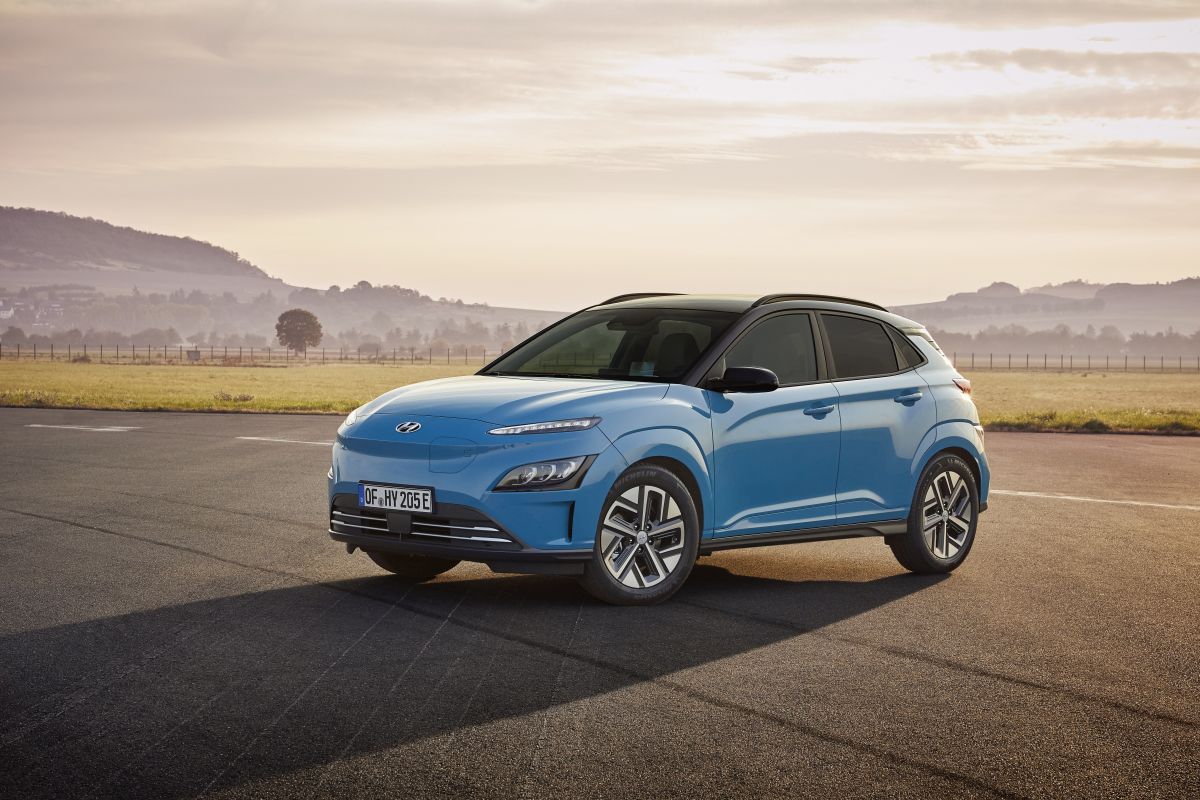 The sporty image that the Kona Electric portrays, does not really reflect in its ride and handling, which can best be described as relaxing rather than exhilarating. The extended range comes at the price of increased weight and this makes it more of a quiet and refined drive, with good cornering stability.

Like many electric cars the Kona does not appreciate bumpy rural roads, especially at any speed and is far more at home with urban or motorway driving. The steering feels light and when pushed you get the sense that the electronic traction and stability controls have to work hard to provide solid grip.

It is not what you might describe as a driver’s car but the handling, ride and noise levels are perfectly acceptable for its generally intended use. 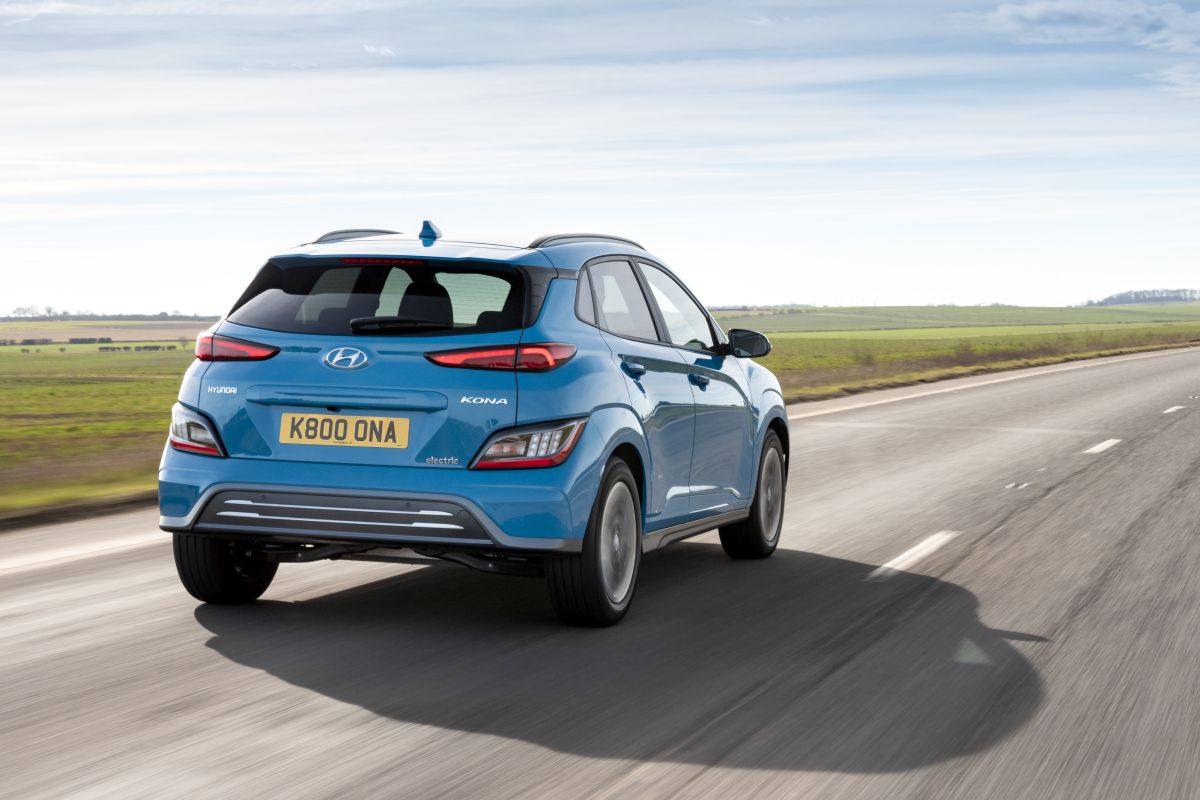 The latest Kona Electric comes with Hyundai SmartSense, a package of Advanced Driver Assistance Systems. This includes; Lane Following Assist, which keeps the car centred in its lane and Forward Collision-Avoidance Assist with pedestrian and cyclist detection, which uses radar and a cameras to scan the road ahead and automatically brakes when it detects sudden braking by the car ahead, or pedestrians and bicycles on the road.

The Kona Electric has yet to be crash tested by safety body, Euro NCAP, however the petrol version of the Kona has received the maximum five star rating, so the expectation would be that the electric model would perform to the same level. 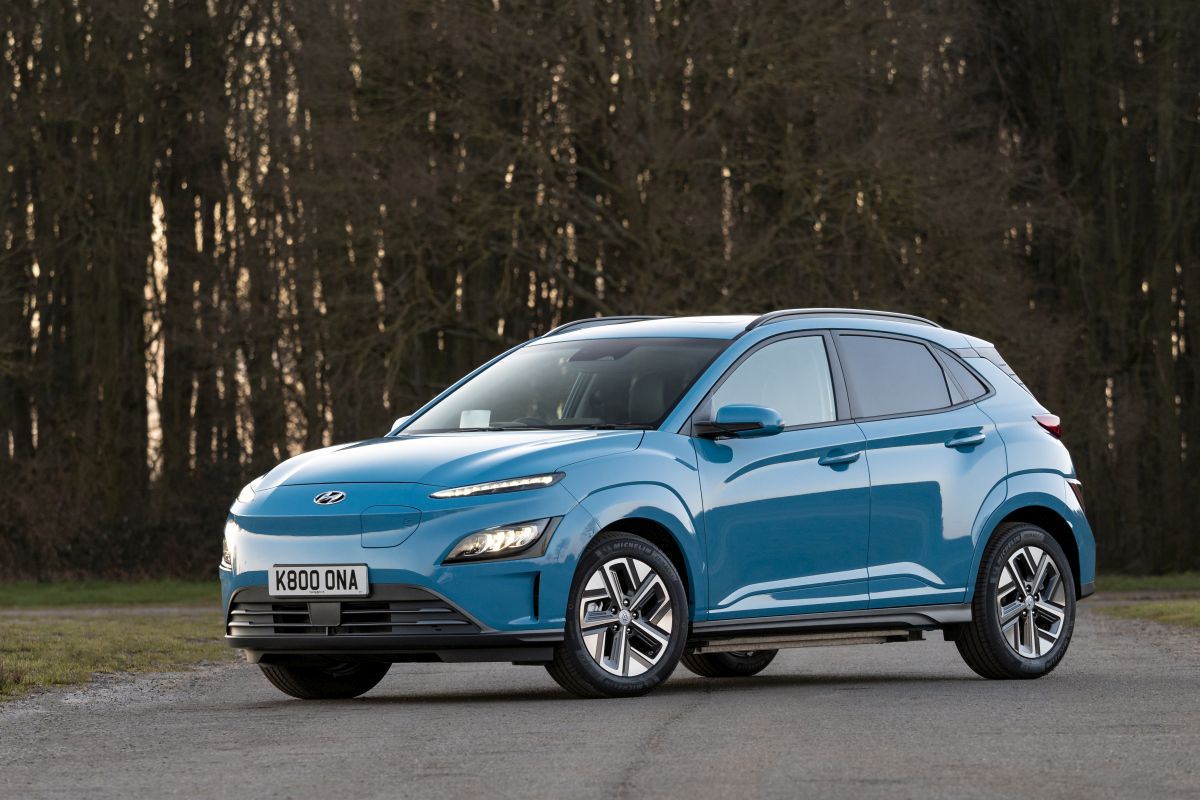 The Kona electric is a reliable, practical and very economical electric car that will continue to tick a lot of boxes for potential buyers. With a price tag of over €30,000 you could indeed get more for your money with a petrol or hybrid option, but for drivers set on the transition to electric, the Kona represents a good entry point.

The key to the Kona electric is defiantly the impressive range, which can pretty much offer anxiety free motoring in a country the size of Ireland. However, in terms of space and specification the Kona does now lag a little behind some of it newer competitors.