The CX-60 is a new SUV from Japanese car maker Mazda. Not only is it the company’s first plug-in hybrid, but it also represents a very important step in Mazda’s quest to move the brand upmarket. The new design is said to be a flagship model aimed at the likes of the Mercedes GLC, BMW X3 and Audi Q5, although it will also fall into a competitive price bracket with hybrids such as the Ford Kuga, Hyundai Tucson, VW Tiguan and Toyota RAV4. Mazda describe the new model as intuitive, safe, easy and enjoyable. It certainly features a host of new driver-centric technologies, but does it offer premium SUV drivers enough to tempt them away from the comfort of their current wheels, when it arrives in Ireland later this year?

The CX-60 looks like a very solid well made SUV and features a familiar Mazda front end design, all be it with a new grille and headlights. It is clearly identifiable as a Mazda, but this is far from just a bigger version of the CX-5. This is a much larger vehicle in all respects and holds its bulk in a shape that looks refined. Various trim levels are available, with 18 or 20 inch alloys and a panoramic sunroof option, as well as a selection of signature colours, with higher specs having the trims and wheel arch surrounds body coloured.

Over all the design looks understated rather than head turning, something that will appeal to many, but certainly not all, premium SUV buyers. 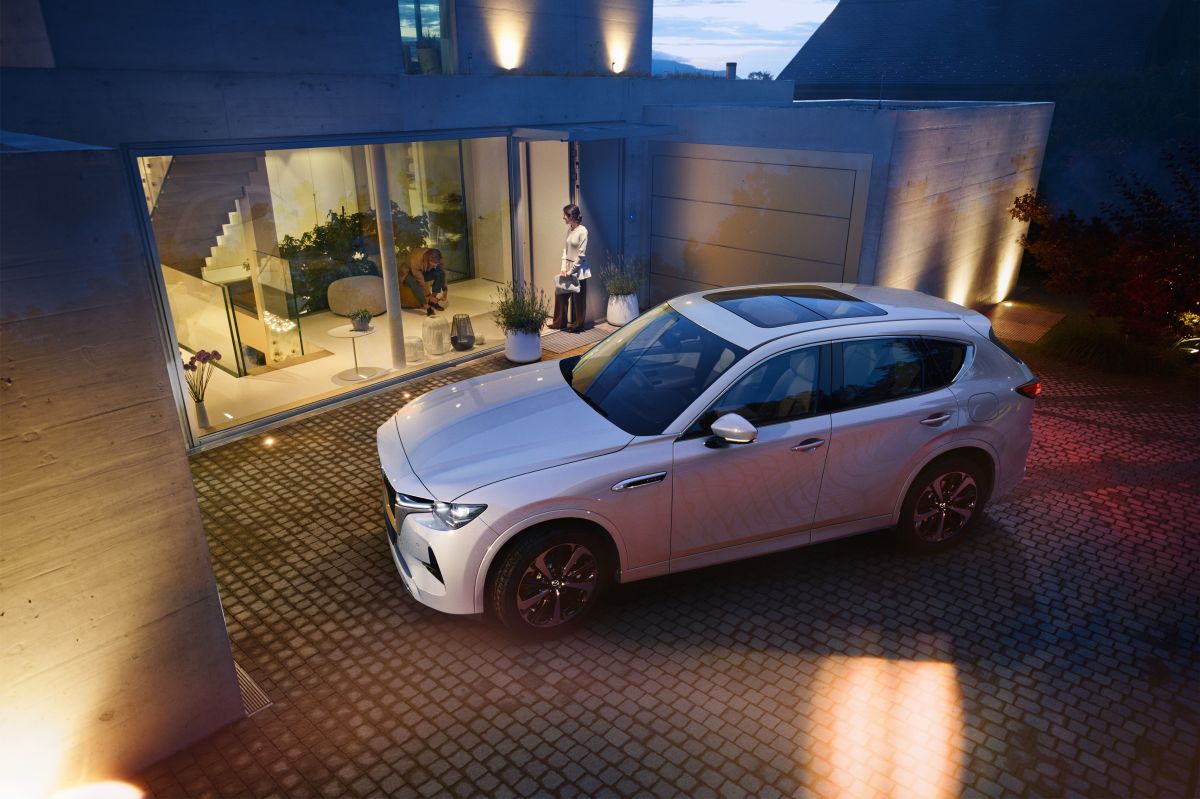 Mazda’s move upmarket can certainly be seen in an interior that scores very well on premium quality and comfort. It comes in four trim levels ranging from the entry level Prime Line, through to the Exclusive Line, Homura and top of the range Takumi. As you move up the scale you get more comfort and a particular focus on driver personalisation with a system to recognise the driver and adjust the settings and surroundings accordingly.

Reflecting the understated exterior design, the infotainment screen is relatively small by some standards. Tactile rotary wheels are available for most operations and there is a neat wireless charging pad, plus plenty of USB ports and all the connectivity you would expect by way of Apple’s Wireless CarPlay or Android Auto.

The rear is spacious both in terms of leg and headroom and the boot has an impressive 570 litre capacity which can be boosted significantly by the flexible rear folding seats. 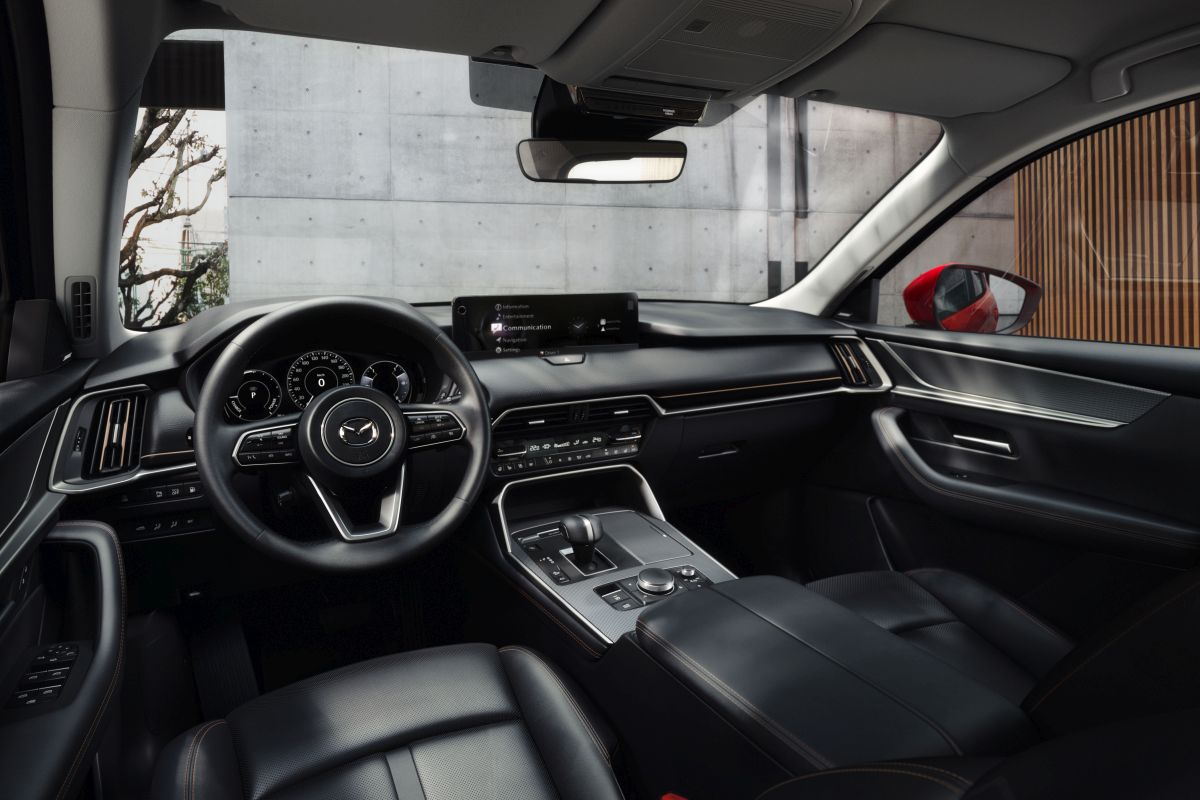 The CX-60 will initially be exclusively available in Ireland as a plug-in hybrid electric vehicle, with both pure petrol and diesel versions expected to follow. This means it has a normally aspirated 2.5-litre, four-cylinder  engine combined with a 100kW electric motor, coming together to produce 327hp and 500Nm of torque making it Mazda’s most powerful road car. This makes it quick off the line for a heavy vehicle able to reach 100km/h in just under 6 seconds.  The motor runs from a 17.8kWh lithium-ion battery which is located centrally under the floor. This offers a 63 km range on pure electric and an official fuel economy figure of around 1.5 litres per 100 km, although battery charge would need to be well maintained for this.

All this means that the CX-60 certainly will not disappoint in the performance stakes, offering lively acceleration and comfortable cruising. 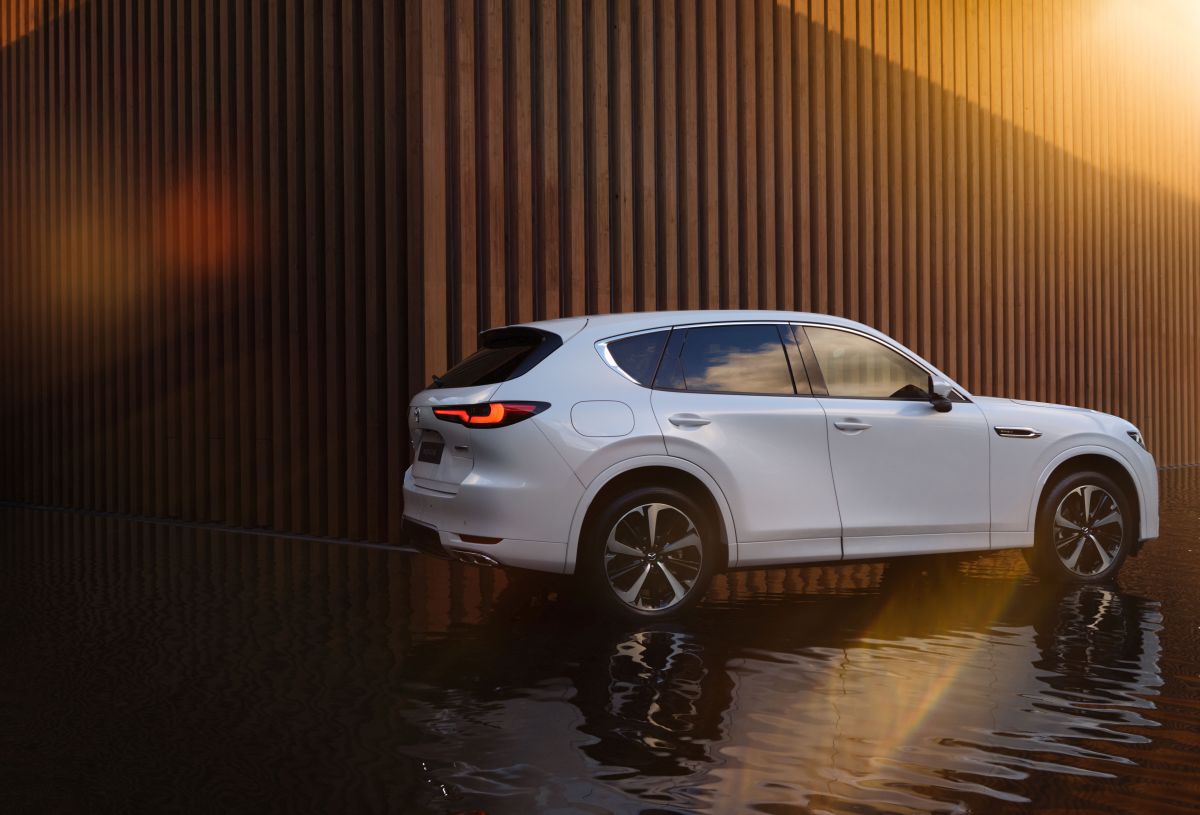 Mazda as a manufacturer generally performs well in reliability surveys and recently managed to outrank the likes of Toyota and Lexus in some charts. Mazda cars in general spend little time off the road and the dealer network rates well.

With Plug-in Hybrid being a new avenue of technology for Mazda, it is of course too early to say if the CX-60 will be able to maintain Mazda’s healthy reliability record. New technology can often bring teething problems, however, Mazda is generally not a company to rush development, so these should be minimal. 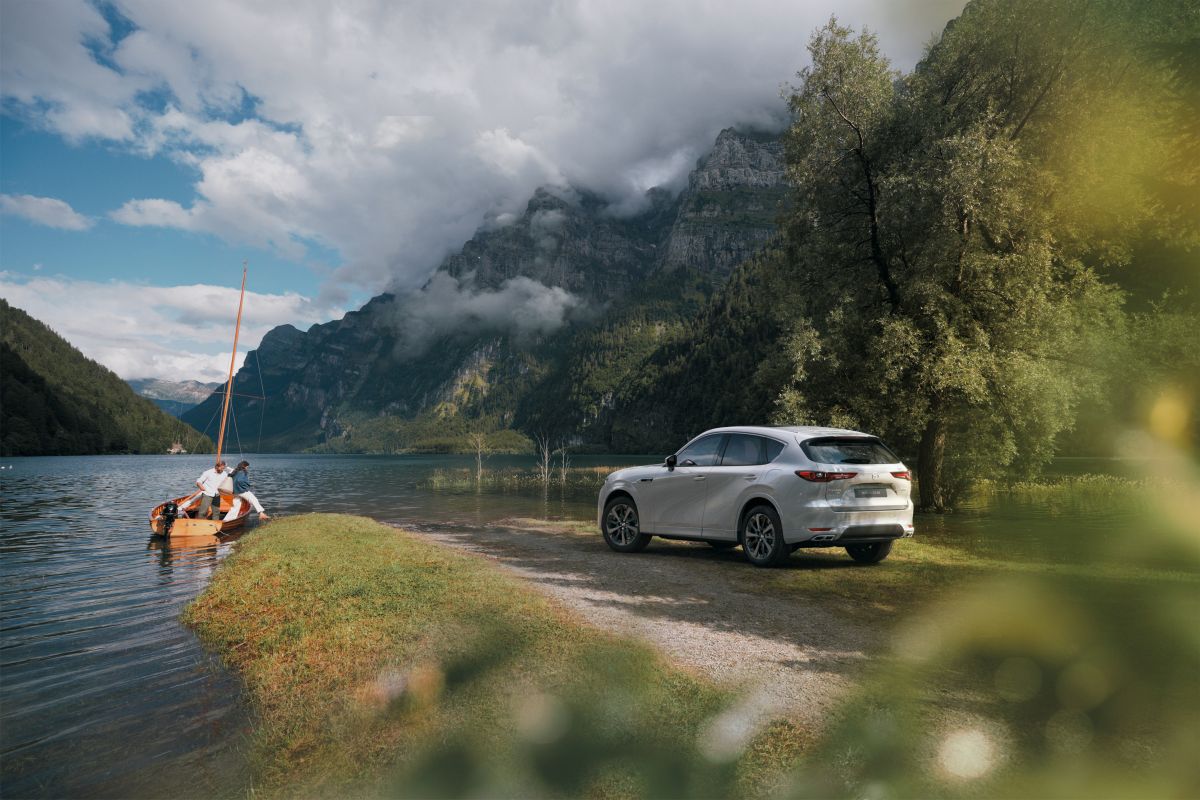 You probably glossed over the early quoted economy figure of 1.5 litres of petrol per 100 km. In old money, that is the equivalent of an amazing 188 miles per gallon and means under €3 of fuel for every 100 km driven. The figure is supplied by Mazda and has yet to be fully verified in independent tests, but either way this should be an economical car to run. As a Plug-in Electric with a normal engine, servicing costs and frequency will be pretty standard. Perhaps this won’t give you the ultra economy of pure electric, but you also won’t have any charger location anxiety. 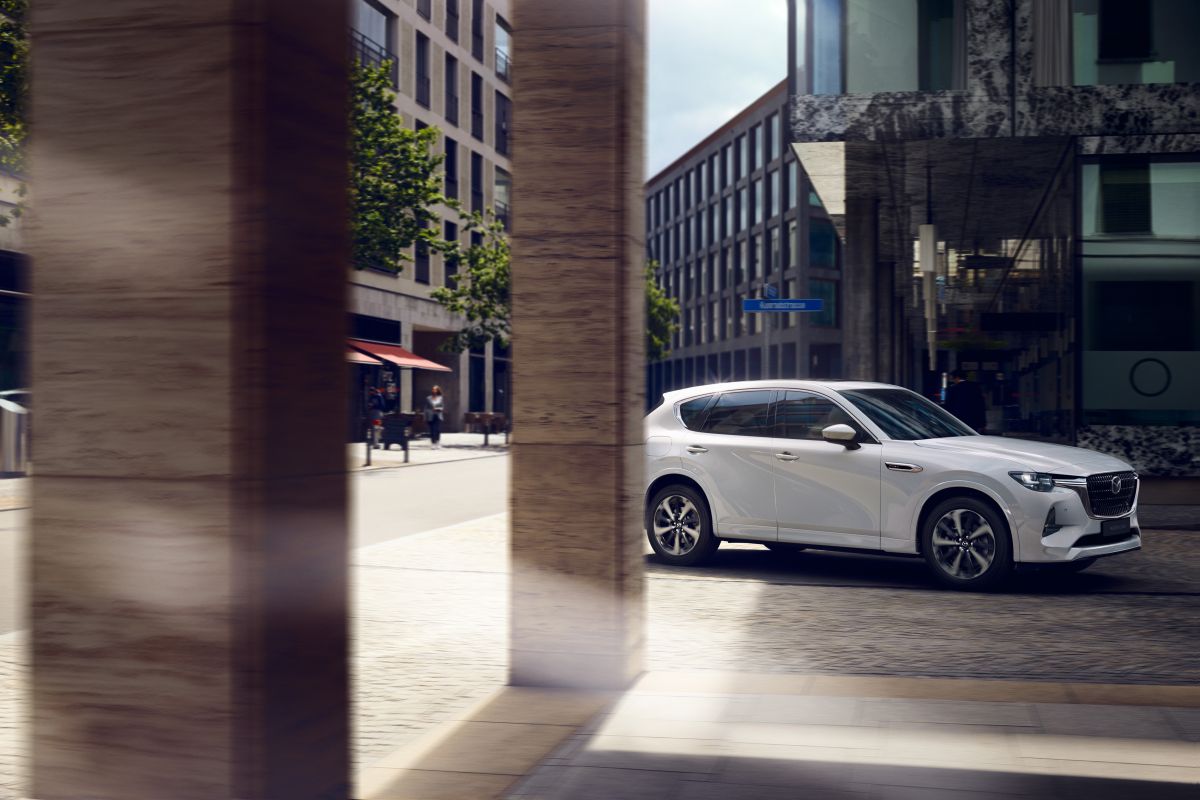 Mazda says the CX-60 has a sophisticated suspension design that includes double wishbone front and multi-link rear suspension and Kinematic Posture Control, a system which was devised for the sporty MX-5. The battery position means a low centre of gravity and this is complemented by permanent all-wheel which has a shaft-driven transfer of torque between the axles and excellent body rigidity. This makes the handling very satisfying and stable and while it might not put an MX-5 size smile on your face, the handling should certainly be right up there with the other premium SUVs.

Drivers can also select a driving mode to suit their circumstances from normal, sport, off-road, Towing and a Mazda Intelligent Drive option for economy. 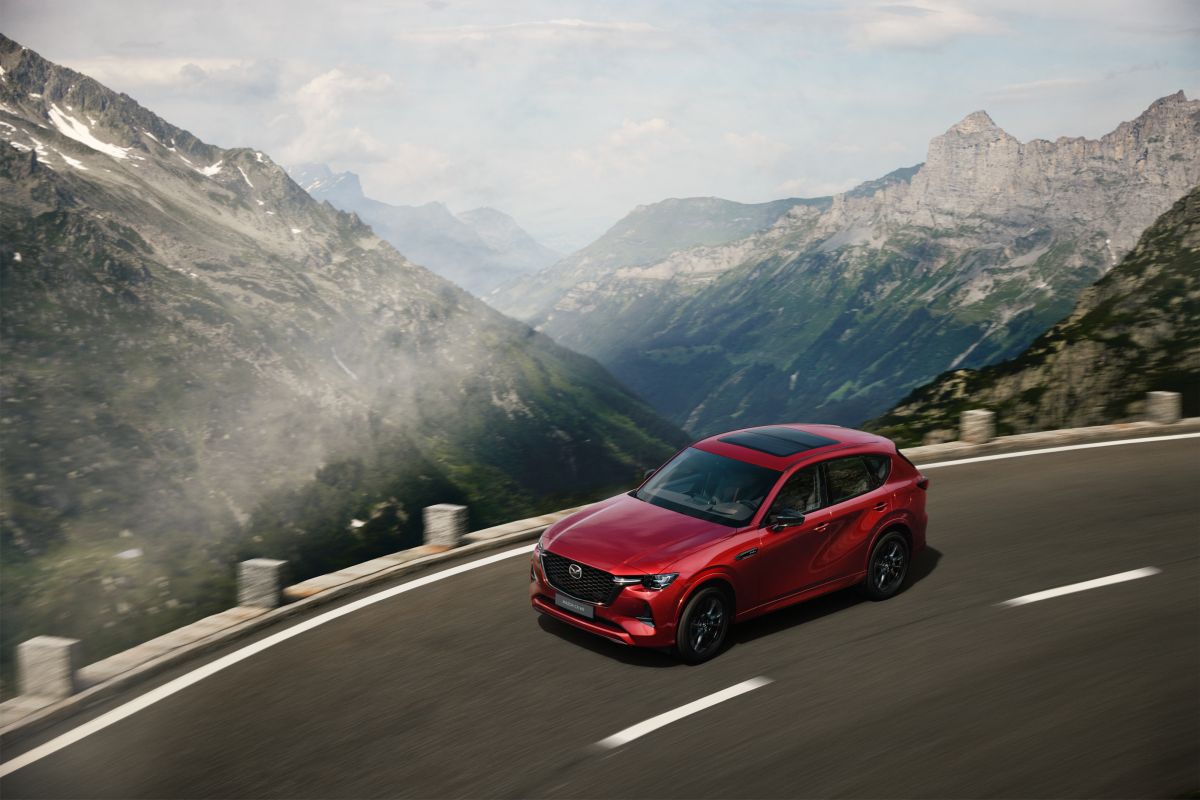 Mazda has placed an emphasis on driver assistance and safety systems for the CX-60. These include a 360° view monitor which allows an all-around view, which is said to be especially useful for low speed manoeuvring. Optional safety packs include; adaptive LED head lights, Front and Rear Cross Traffic Alerts, Cruising and Traffic Support and i-Adaptive Cruise Control.

The car has yet to undergo Euro NCAP safety testing, but the five star rating of the Mazda CX-5, the solidity of construction and the new safety technology on board, would seem to point to the CX-60 also achieving a 5 star safety performance. 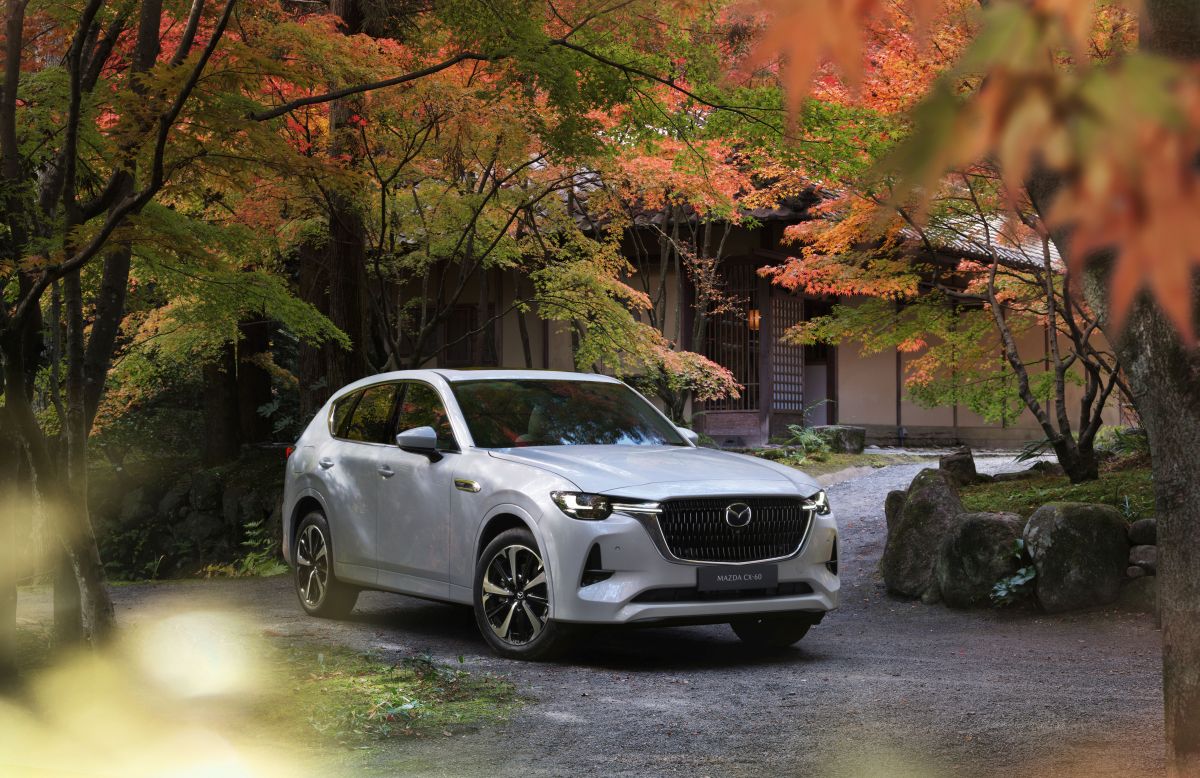 Depending on the trim choice, the CX-60 will be priced from €49,500 to €56,350. Dealers are currently taking enquiries, but delivery dates have yet to be confirmed, although are expected to be around autumn time. A 3.3 litre diesel version should be available before the year end and next year will see the launch of the 7 seater CX-80.

The CX-60 is entering a competitive sector where there is plenty of choice, not just in terms of models, but also powertrains. It is a very well put together car that is comfortable, stylish, practical and economical. This will mean that despite the stiff competition it will appeal to many buyers who perhaps prefer elegance over excitement.