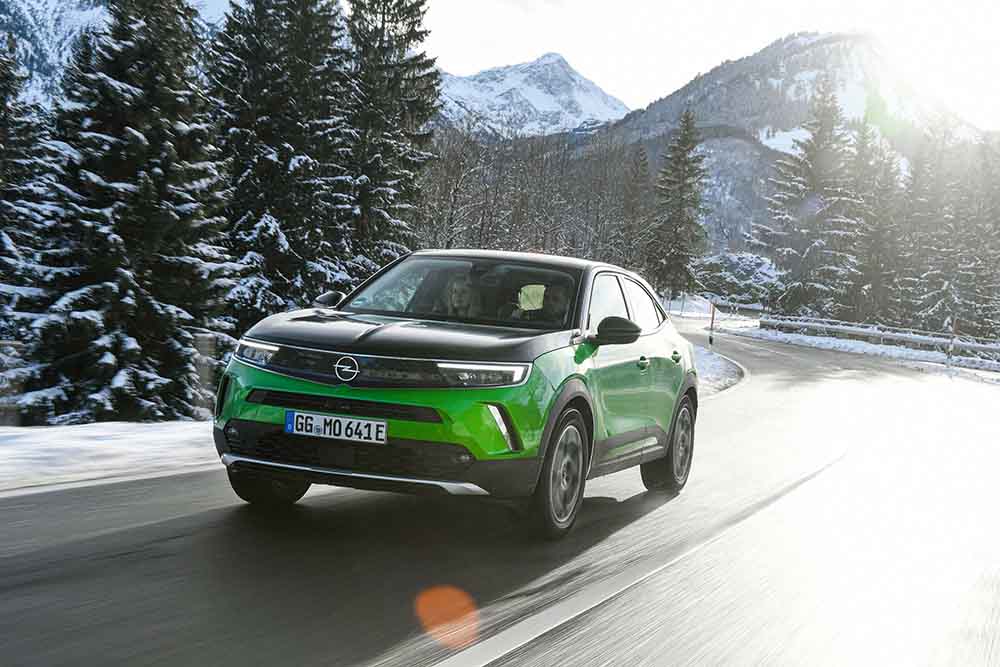 Quite often when you see a new vehicle model on the road it will blend in with the traffic and hardly make any impression, but this is not the case with Opel Mokka-e. The first time you see the model it makes an instant impression and you probably have to check the badge to see who actually makes it. The fact that it is an Opel may come as a surprise, with styling has taken a considerable leap from the first generation Mokka with its more conservative looks.

The Opel Mokka-e is a handsome, sporty model with a design that makes it look bigger on the road than its actual size. With Opel now part of the Stellantis Group, it shares a platform with the DS 3 Crossback and Peugeot 2008, but the styling feel and character of the car remains very different, with the Mokka-e distinctively Opel.

So does the electric Mokka-e make sense in terms of practicality and does it offer enough to justify the near €7000 price premium over the petrol version?
Pros
Cons

Not everyone will share the view, but to most eyes the Mokka-e looks great. It is modern, distinctive and a little different, doing more than enough to stand out from the compact SUV crossover crowd.

The Mokka is actually only 90mm longer and 30mm wider than a Corsa, but it sits higher on the road and gives the impression of a much more sizeable car. Up front there is an enclosed black vizor grille with slim ECO-LED headlights. Black trim, roof and alloys come as standard on the SRI version and this means that the car lends its self well to a bold colour such as Matcha Green or Voltaic Blue, although premium colours add to the price. There is also the option of a black bonnet to add to the two tonne effect. For a more subtle look the Elite version offers less two tone and bi-colour alloys.

The Mokka-e has a sporty, rugged stance and will turn a few heads. If you want to blend in, then it is perhaps not the car for you, but those with a more outgoing personality are likely to feel at home behind the wheel. 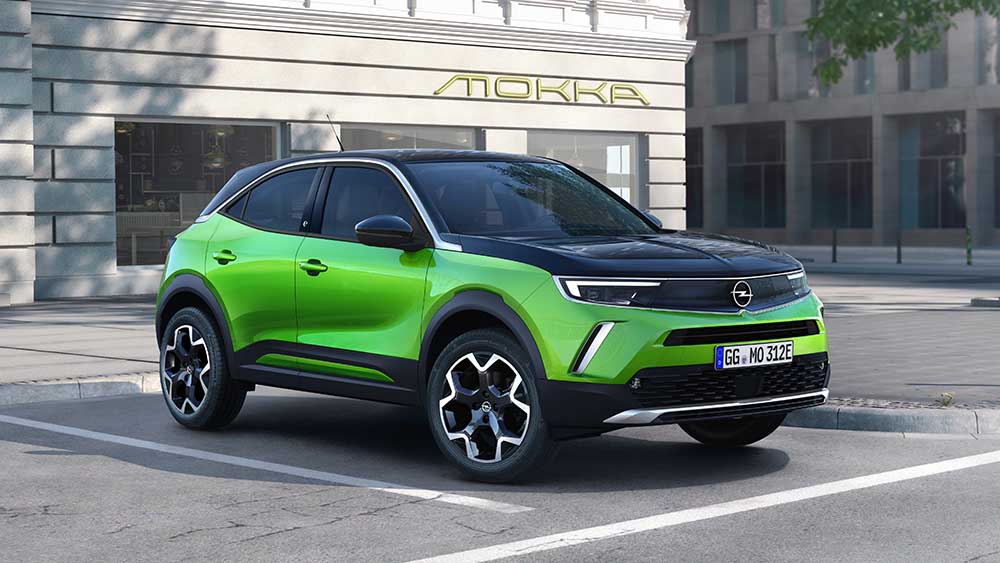 The bigger proportions of the Mokka compared to the Corsa do make the interior more spacious, but perhaps not as generously as you would expect. The front seats offer plenty of room and a good driving position, but in the rear, space is quite restricted for even two tall adults. The rear seats can accommodate two child seats, but little else. The boot space is also smaller than you might expect at 310 litres compared to 434 in Peugeot e-2008. All this might not be a problem for many potential buyers, but means it might not offer the practicality for a family with young children.

As to the equipment and the feel of the interior, the build quality seems to be very good and there is a 10-inch touch screen infotainment system with navigation and a12-inch digital driver’s display. It all connects to Apple Car Play and Android Auto and the system is intuitive to use with nice sharp graphics. There are also physical buttons for many functions. The centre console contains a drive selector and a wireless phone charger.

All in all, the interior is well finished and functional, however, from a personal point of view, the over use of black materials makes it seem a little dark. 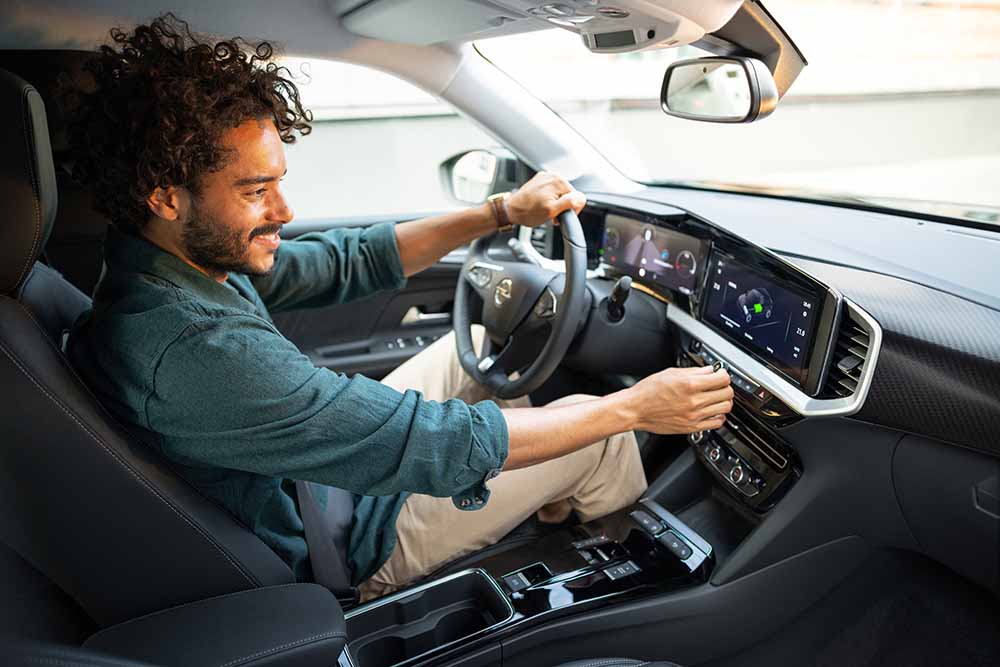 Anyone going from a petrol engine to the Mokka-e will be impressed by the zip and power of the electric drivetrain, but to the seasoned EV driver the Mokka-e performance will seem pretty standard.

It has a 100kW electric motor, driving the front wheels and is powered by a 50kWh battery. This gives it 136hp and 260Nm torque. It thus accelerates swiftly, although not outrageously, from 0-100km/h in around 9.0 seconds and has a top speed of 150km/h. This means the Mokka-e certainly has all the power and punch needed for city streets and can hold its own on more limited motorway runs.

Opel claims a WLTP range of 324km on a full charge for the Mokka-e, which is more than enough for most commutes. Drive at speed on the motorway and the practical range is likely to be closer than to 200km. In fact, this sharp drop in range, due to factors such as speed, equipment use and temperature is common to all electric vehicles and two Opel’s credit, they offer an efficient range calculator which gives more accurate information than most. Opel also provides practical
information on boosting range.

Charging at one of those elusive 100kW public fast chargers will take around 30minutes for 80% capacity. With a good home charger set-up it will take the normal 7.5 hours for a full charge. This really means that if you have, or can get, a convenient home charging set-up and do mainly short trips, the Mokka-e can be a practical option. 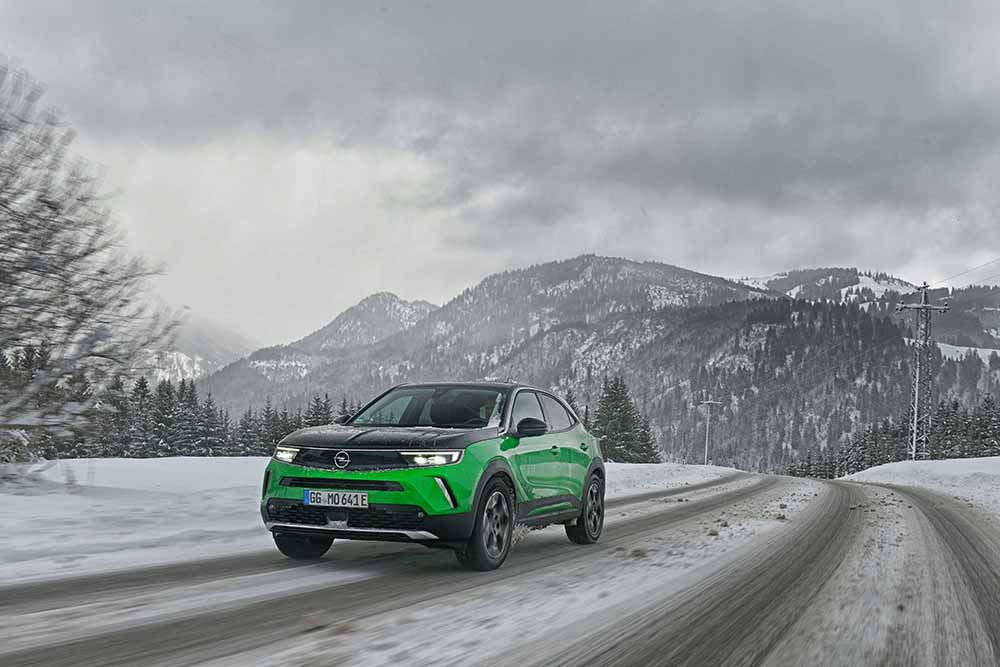 As a newish model, reliability predictions for the Mokka-e are not easy to make. The electric drive is in its favour as it has less complex systems than petrol or diesel, but the overall reliability of Opel and sister brand Vauxhall cars is not good. It comes with the normal 3 year warranty and 100,000 km battery warranty. If things do go wrong, Opel has a 36 location service network, far more generous than many competitors. 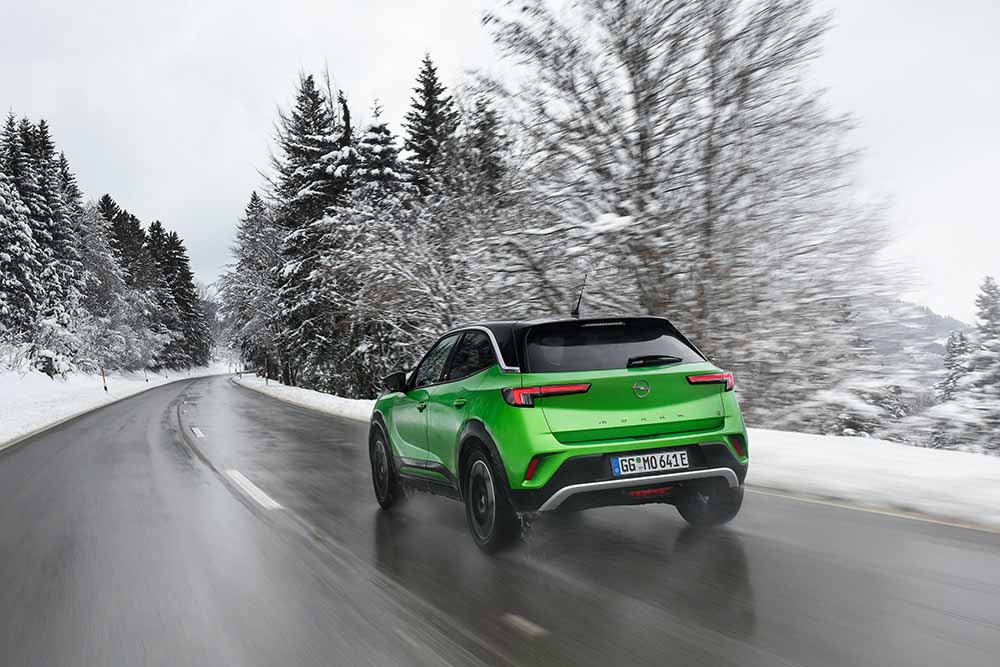 This is a low tax car and sensible charging will allow drivers to operate it at a fraction of the cost of the petrol alternative. However, keep in mind that the initial cost is €7000 higher, so pay back might take a while. It is also worth remembering that when it comes to resale of trade-in, the Opel badge will be worth far less than some of its other German counterparts. 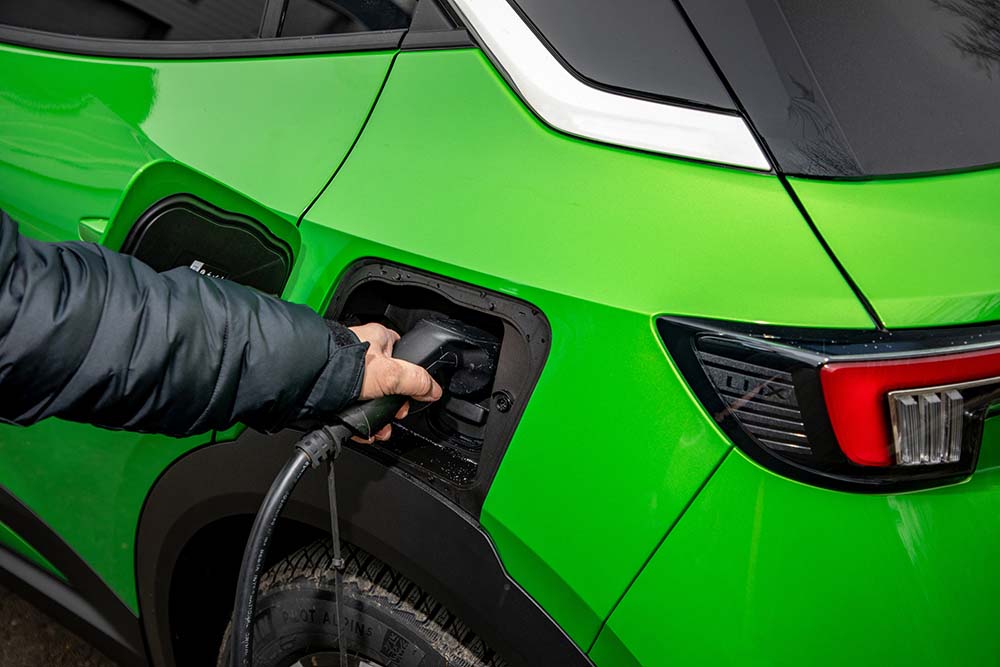 The Stellantis chassis gives the Mokka-e a very firm base to build on and the Opel engineers have done an impressive job, creating a car that has great body control when cornering and can equally smooth out some of Ireland’s bumpier roads. It feels far more assured and comfortable to drive than the previous incarnation of the Mokka and unlike some competitors this is not an especially heavily car and so feels quite agile. 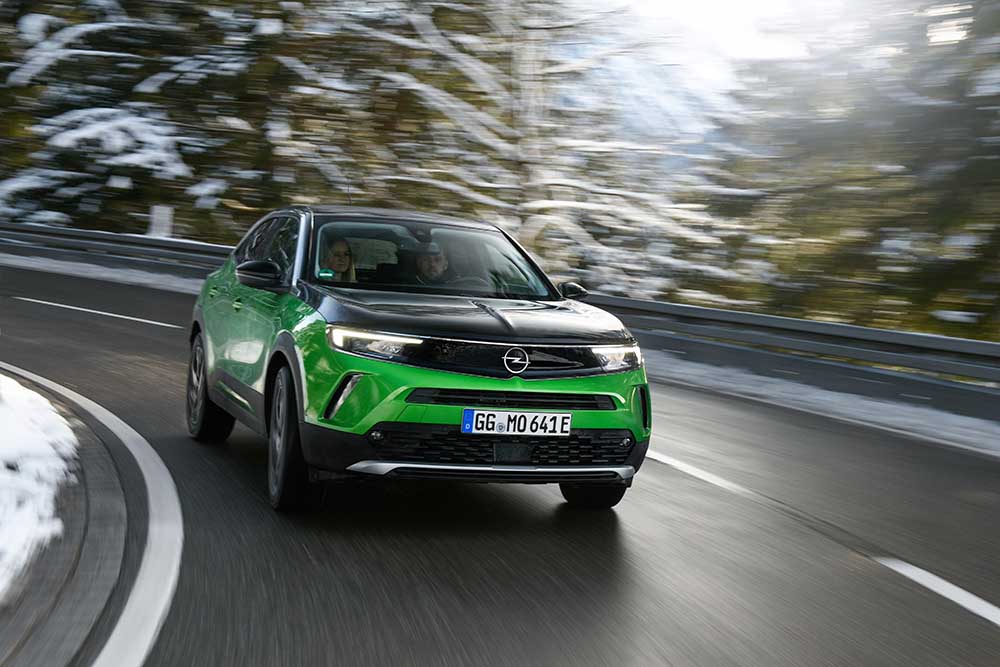 The latest Mokka has a four star safety rating from Euro NCAP, meaning it offers very good, but not class leading protection. What you do get on the electric Mokka is an impressive line-up of safety technology, which will make driving safer, without you really knowing it. These features include; Enhanced traffic sign recognition, Lane Keep Assist, Collision avoidance sensor with brake assist, Pedestrian and cyclist detection alert, Electronic cruise control with speed limiter and Adaptive cruise control with automatic Start &amp; Go. 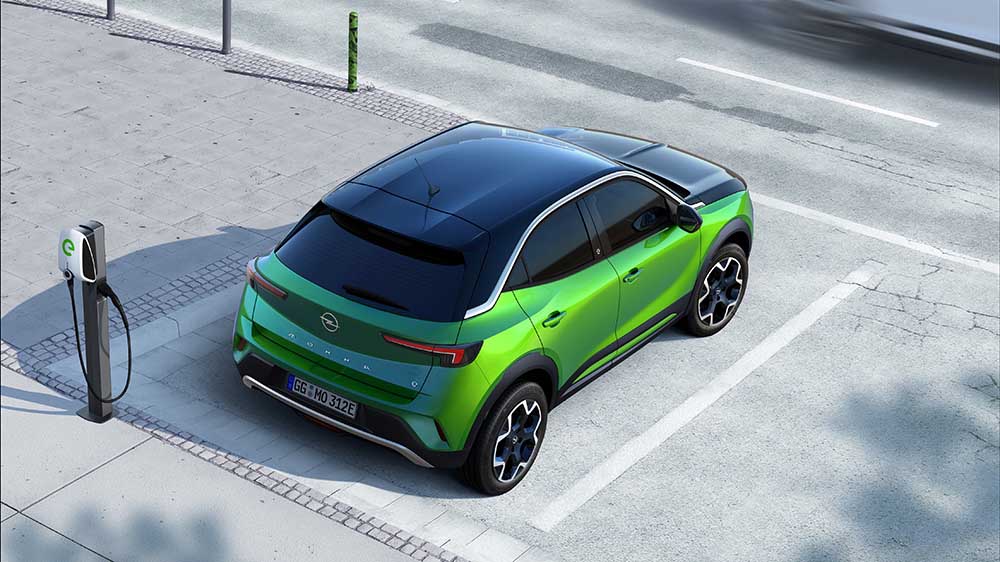 There is a lot to like about the Opel Mokka. It looks great, drives well and has a good level of standard equipment. However, at €35,000 + for the ‘e’ version, the price could be a bit of stumbling block for many. The big price drop may make some buyers think the petrol version remains a better option, while committed electric buyers might believe they can get more car for their money with other brands. Whatever way you look at it, there is enough about the Mokka-e to make it stand out from the crowd and as such it will be a popular model choice.