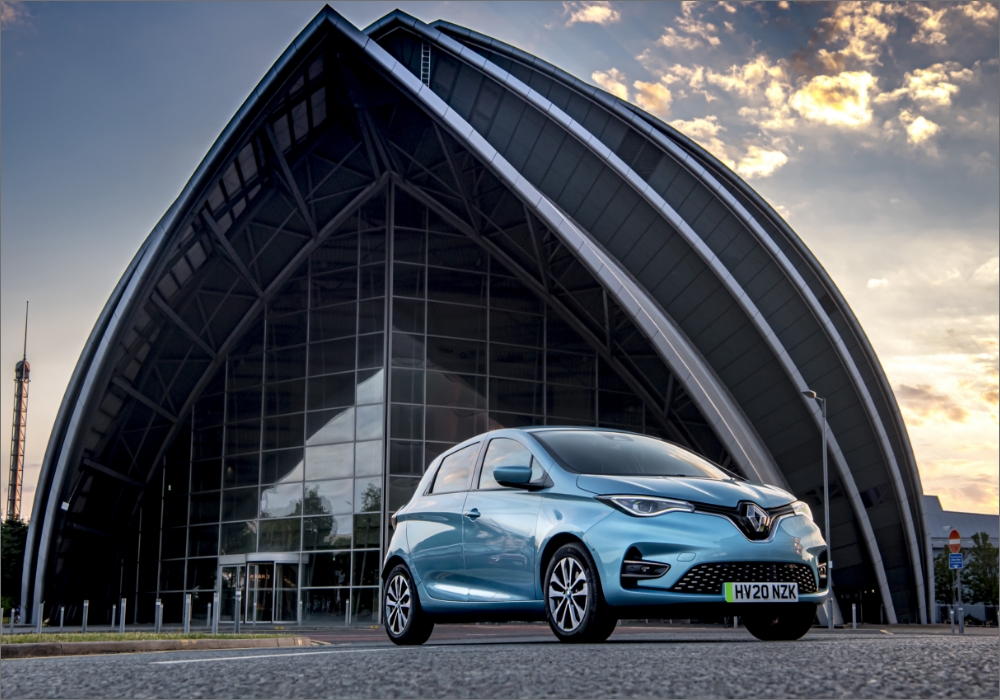 If you have done any continental city breaks during the past decade then the Renault Zoe might well have been one of the more unusual European models that caught your eye. The electric Renault may have been a more recent introduction to Ireland, but it has been available in Europe since 2012. Not only this, but the ZOE has also become the best selling electric vehicle in Europe.

The latest incarnation of the Zoe is the new Zoe E-Tech electric. Although this looks much like previous versions of the Zoe, it is a true evolution of the electric model, with much updated technology and many of the bugbears of the older models ironed out. But does Renault’s experience in the electric hatchback sector mean it has refined and perfected the art, or do the fresh eyes of new entrants to the market give them the advantage in terms of design and innovation?

Ten years ago the exterior of the Zoe looked eye-catching and innovative. With the distinctive Renault nose it might not have been to everyone’s taste but it did stand out and make a statement. The latest Zoe E-Tech retains those familiar lines and in truth looks much like previous versions. The latest package does feature new colours and full LED lighting, but ten years on this is now a model more likely to blend in than stand out, meaning it is likely to appeal to a different group of more mainstream drivers.

The Zoe E-Tech is by no means a bad looking car and its sound original design makes the most of its compact dimensions, however, style-wise many potential buyers, especially in the younger age bracket, may find the likes of the Opel Corsa-e, Peugeot e-208, or Honda e more appealing. 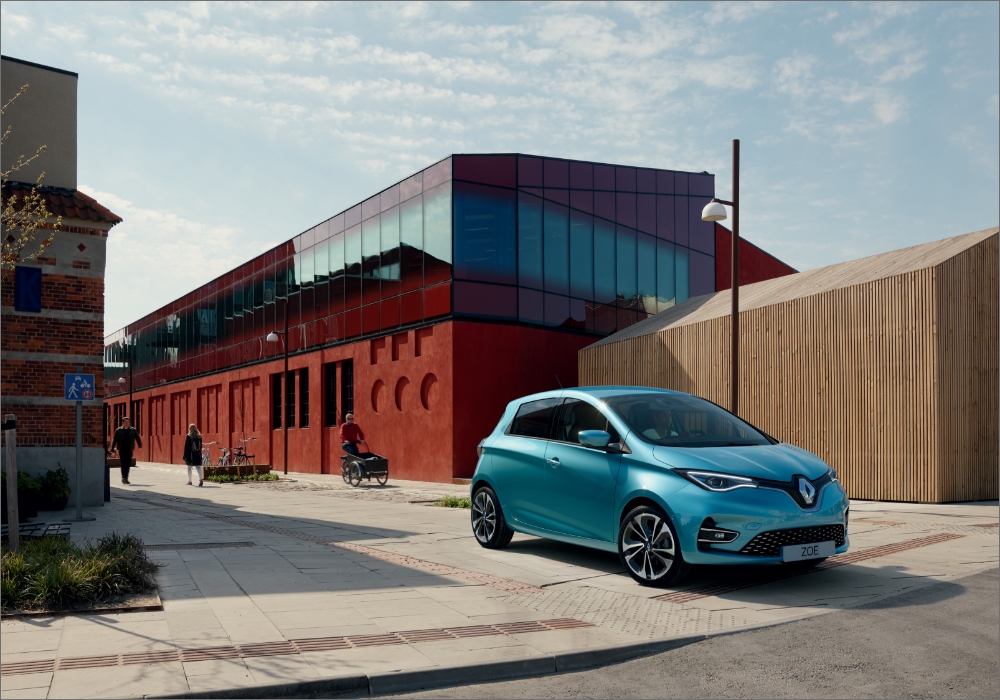 As a model with a ten year track record you would certainly expect the Zoe to have been evolved and improved in many aspects and the interior is definitely one of these. The finish and material quality have improved, including the use of eco-friendly options, and, as with any maturing model, Renault have added more technology to boost appeal.

A 7.0-inch infotainment screen appears on the base version, while there is a 9.3-inch portrait screen if you go top of the range. All have Android Auto and Apple CarPlay connectivity and are easy to use. There are also physical controls for many functions.

The centre console offers wireless phone charging and two cup holders, but no parking brake. This is automatic when the car is turned off, but does take a bit of getting used to.

The driver position on the Zoe has always been slightly elevated and the options for seating adjustments are a little limited, especially for taller drivers. The seat itself also feels a little basic. However, the steering wheel feels good and there is also the welcome addition of cruise control buttons.

It is a compact car so rear seat expectations are always going to limited. The space in the back is workable for adults on shorter journeys and there is also space and fixings for child seats. The Zoe also scores with a generous 338 litre boot space and seat folding practicality. 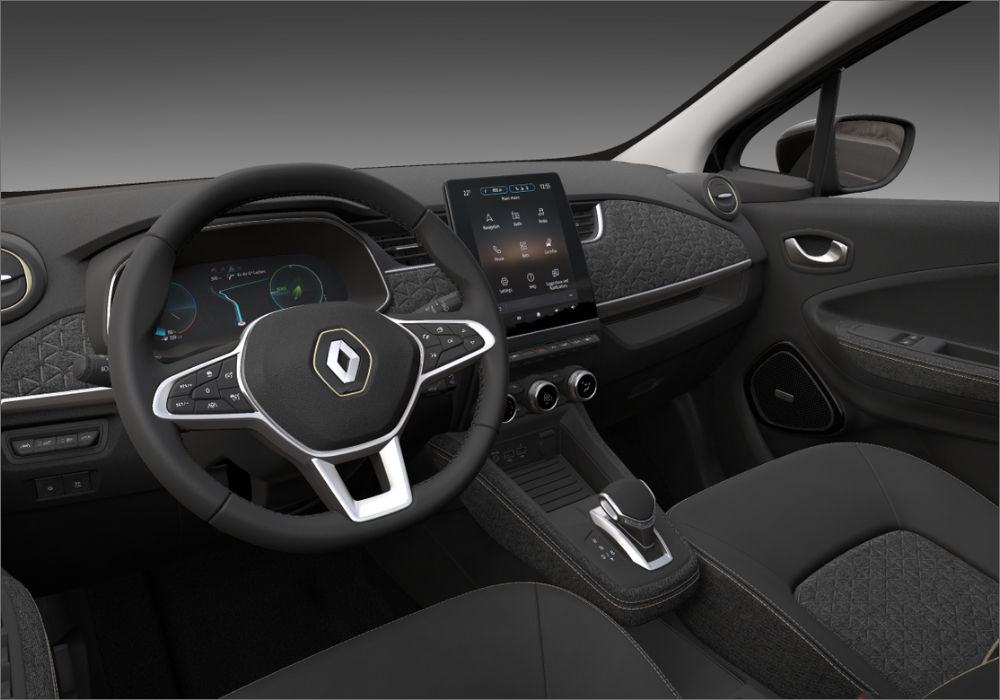 The Zoe comes with either an R110 Z.E. 50 or R135 Z.E. 50 motor, depending on choice and trim. This in the basic Play version you will have 110hp and in the GT Line version 135hp. It is a noticeable difference in power, but also a big jump in price, so it is likely to be the 110 engine that is the popular choice. This will provide a top speed of 135kph and the type of zippy acceleration you might expect from an EV. It is certainly good for urban use and can hold its own on a motorway, but the performance is steady rather than spectacular.

The good news is that the latest versions of the Zoe now have a 52kW battery which provides a significant boost to the range. Renault says that the range is up to 395km on a full charge, but rather than leave the real world figures to guesswork or experience, they also offer a useful range calculator online. Thus for example with the smaller 110 motor, and driving at an average speed of 50kph in 20°C heat, they say a range of 377km is achievable. At a more motorway like average speed of 110kph this drops to 234km. Just about any electric vehicle will see similar or more dramatic range drops at speed, but at least Renault has taken a transparent approach.

With this in mind Renault has also added the option of 50kW DC fast-charging to the Zoe. This is an extra and in addition to the Chameleon charger to cope with the 22kW public charging network and of course home charging options. A 7kW domestic box will take some 9.5 hours for a full charge, while at a 22kW point this would be three hours. If you take the fast charge option the official line is 150km range in 30 minutes, so a full charge would be just under an hour.

With most Zoes operating in urban environments, generally range and charging would not be an issue. However, as with any EV you will need to plan and be patient on loner journeys. 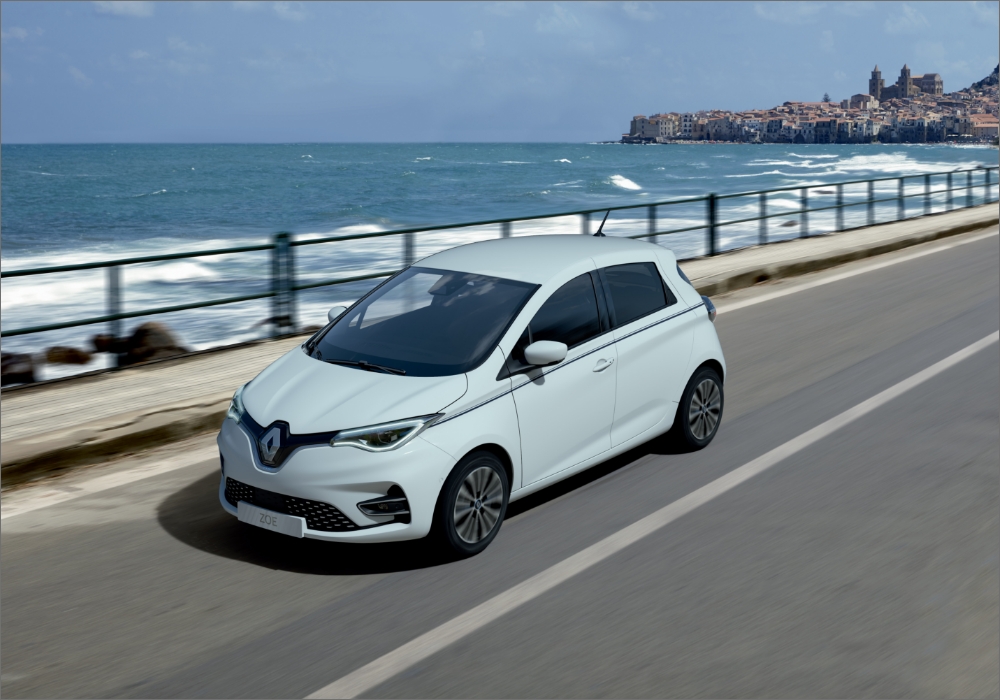 Renault as a brand does tend to find itself in the lower half when it comes to customer satisfaction surveys, but the good news from the Zoe perspective is that despite its relatively long history for an electric model, there are very few scare stories about Zoe ownership. Yes there will be the odd issues, but a dealer service network that is well used to the technology should be able to sort these out. The long Zoe track record also means that Renault is able to build on its extensive electric vehicle expertise and hopefully refine the technology to be very reliable. 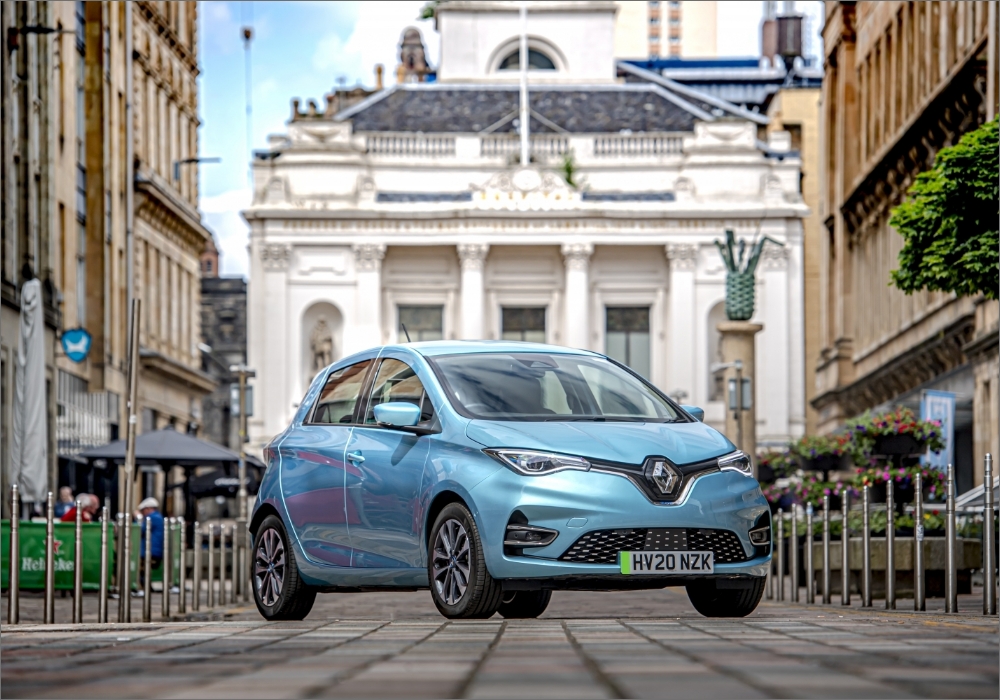 The Zoe is perhaps a prime example of what an EV really should be, compact, practical and efficient. It can get you from A to B without the extra weight of an SUV and so is light on energy use. It is also low tax and comes with a generous 5 year warranty which should reduce any maintenance and repair cost. This means if you want a zero tailpipe emission car, that will provide real operating savings, the Zoe is an excellent choice. 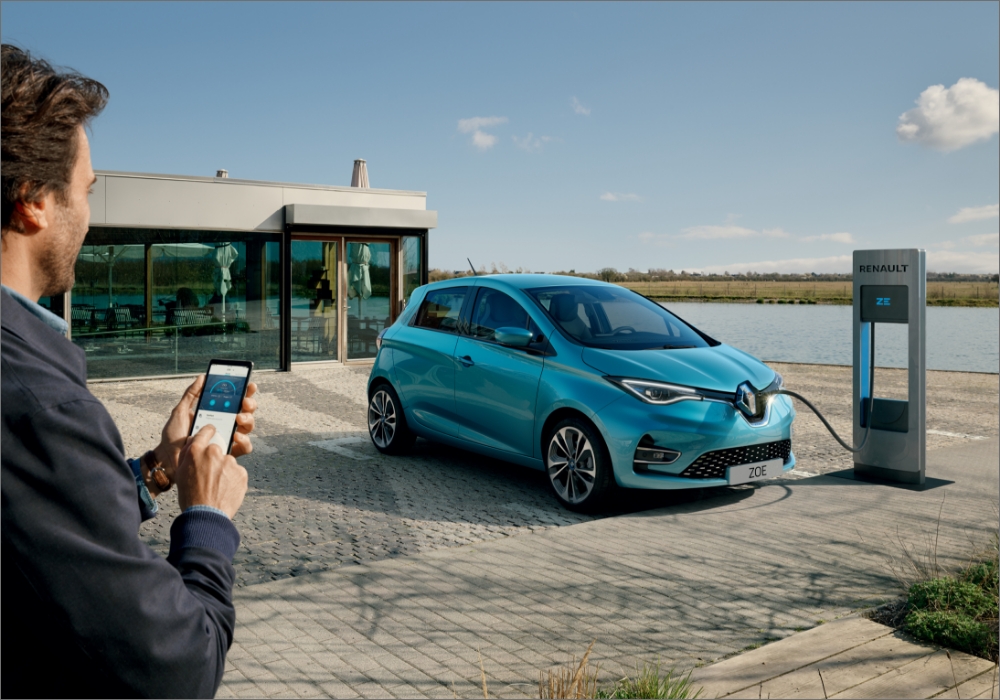 While the Zoe offers plenty of grip, the steering does feel a little light and lacks feel and feedback.  The suspension, especially on the Play and Iconic versions irons out bumps nicely, although in tight corners this does mean that you feel a bit of body roll. The handling and feel of the Zoe is functional rather than dynamic, however, given its intended use this is not necessarily a problem.

Most Zoe drivers will be looking for practicality and economy rather than anything to get the pulse racing, so in an urban environment, or on short rural runs, it is perfectly at home. The Zoe also does not feel out of place on a motorway. 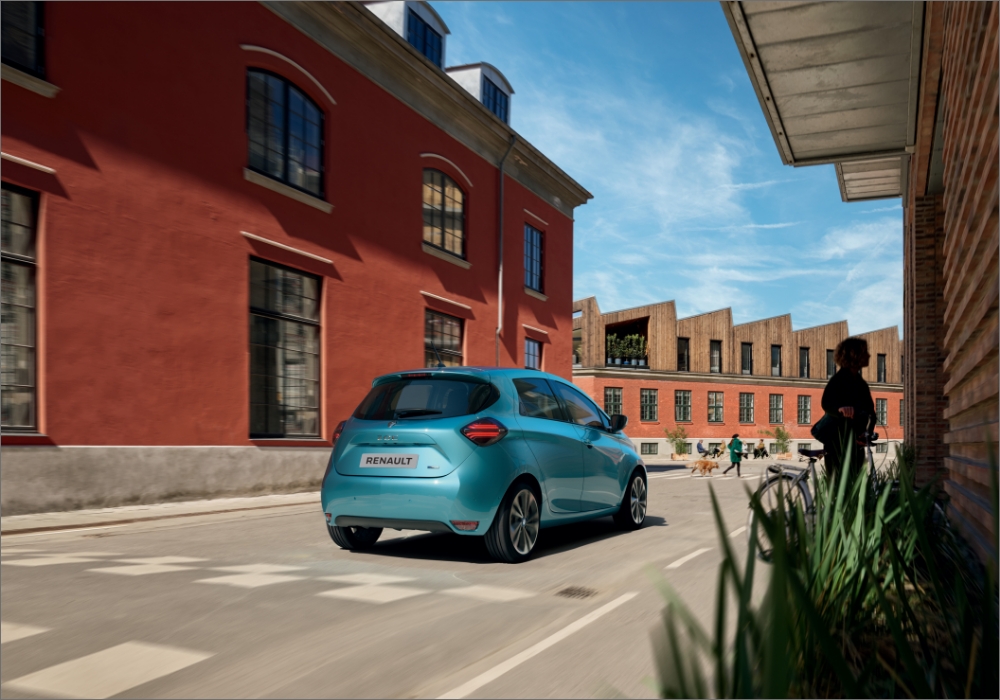 The safety element of a vehicle review is normally pretty standard, but with the latest Renault Zoe it all gets a little curious. Renault was the first vehicle maker to ever get a Euro NCAP  5 star rating with the Laguna in 2001. The older Zoe achieved a 5 star rating in 2013, but the newer version of the Zoe tested in 2021 received a zero star rating.

Based on the same architecture it is not possible for the Zoe to have suddenly become totally unsafe to drive, so what accounts for this dramatic fall from grace? The answer is a change in airbag configuration, which Euro NCAP argues has dramatically reduced occupant safety. It has also criticised the level of crash avoidance technology.

Renault have argued that constant changes to the Euro NCAP test protocol have caused this problem and that the design of the Zoe is fundamentally safe. It should also be noted that it is much easier for high safety ratings to be achieved on higher priced bulkier cars. Renault will no doubt work to improve the Zoe rating, but if safety is a major buying consideration, then the current model may not be for you. 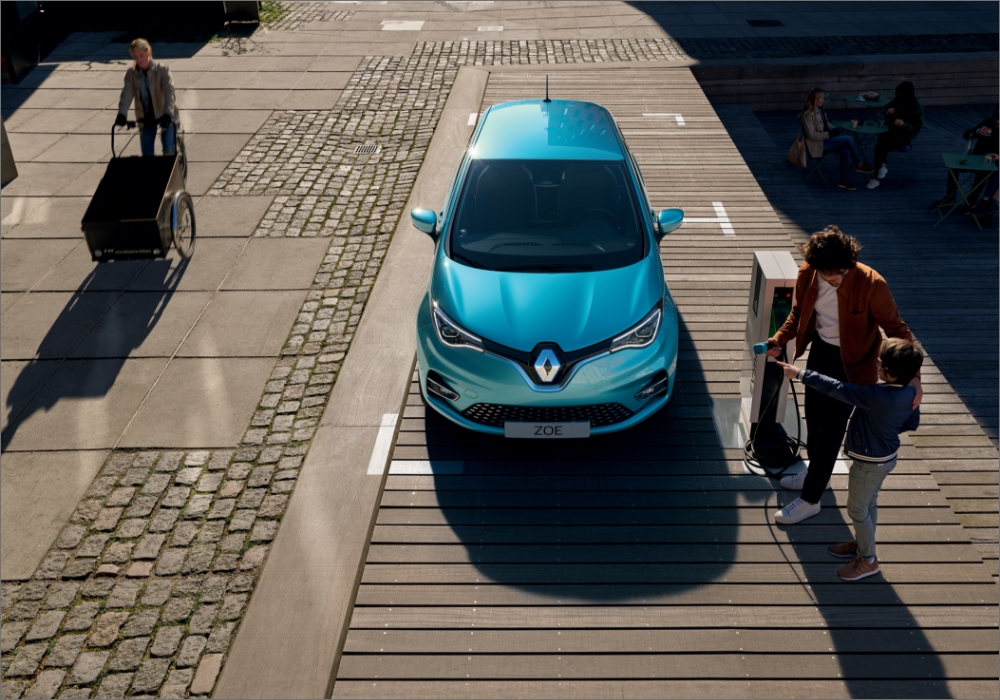 The Zoe has been traditionally marketed as the affordable electric car, but with the E-Tech electric versions it has become more of a coming of age mature electric vehicle that provides a good all round package at a reasonable price. With grants, the Play version will cost €30,295, the Iconic €32,995 and the top GT Line € 34,995. This brings into question the inexpensive EV tag, and puts even the lowest priced version in a bracket €8600 above the equivalent petrol Clio. With such a gap, the Zoe will not be tempting many petrol drivers unless they are truly set on the switch to electric.

There is a lot to like about the Zoe and it does have improved range and a good level of equipment. It provides buyers with an option to get an EV that has been evolved and refined over the years to a very well round package and this will have appeal to some buyers. However, you can’t help get the feeling that those wanting to take their first leap into the electric world may want something with a little more spark.